One of the prominent board game designers of all time is Reiner Knizia. In the past we have reviewed eleven different games designed by Reiner Knizia. That might sound like a lot but Reiner Knizia has made hundreds of games so we have only looked at a small fraction of all of the games that he has made. Today’s game Sudoku The Card Game’s title pretty much explains the entire game. It is basically a card game version of the popular puzzle game Sudoku. Sudoku The Card Game is a solid game that has some issues.

How to Play Sudoku The Card Game

Randomly choose one of the yellow cards to place in the middle of the table. Shuffle all of the other cards and deal five cards to each player. Choose the starting player with any method acceptable to all of the players.

On your turn you will try to play one of your cards to the table. When playing a card a few rules must be followed. 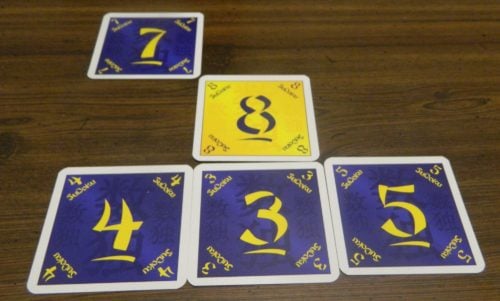 #2 All blue cards must be placed within one of the eight spaces surrounding a yellow card. The card cannot be the same number as any of the other cards in the 3 x 3 grid. 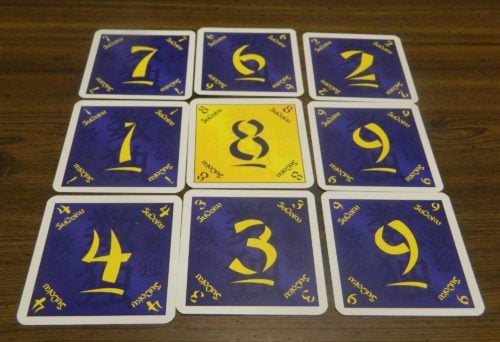 One of the two nine cards were improperly played since two of the same number cannot be placed within the same 3 x 3 grid.

#3 The same number cannot be repeated in any row or column. 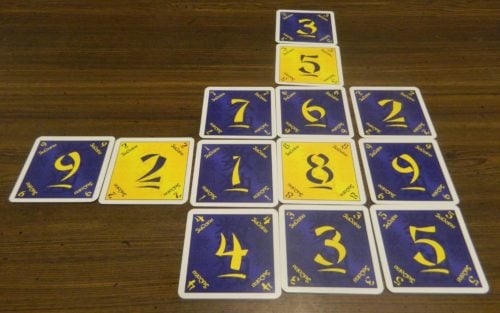 #4 All yellow cards must be placed in the same vertical or horizontal line as another yellow card. There must be exactly one blue card between two yellow cards. The yellow card cannot be played if it would create a 3 x 3 grid featuring two of the same number. 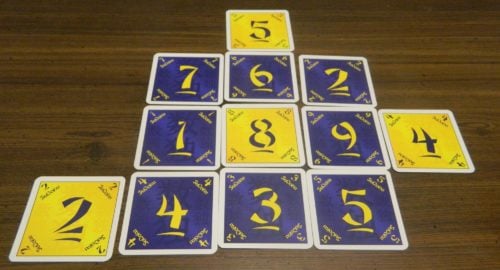 The yellow two card could not be played since it is not in the same row or column as the other yellow cards.

If a player plays a card that violates one of the rules, the player takes the card back and puts it in their penalty pile. If a player can’t find any cards that they can legally play, they choose one of the cards from their hand to put into their penalty pile. A player will draw a card to end their turn no matter if they were able to play a card on their turn. When the draw pile runs out of cards, the game continues until all of the players have gotten rid of all of their cards.

My Thoughts on Sudoku The Card Game

With the name of Sudoku The Card Game it should not surprise anyone that the game is basically just a multiplayer card game version of the popular puzzle game. The basic premise of the game is to play cards to form 3 x 3 grids where none of the numbers are repeated. In addition the same number can’t be used twice in the same row or column. While this formula is slightly tweaked in Sudoku The Card Game it basically plays the same as the puzzle game.

For those people who have played the puzzle game before or are at least familiar with the concept, Sudoku The Card Game takes just a couple of minutes to learn. A person not familiar with Sudoku will take a little longer but I don’t see it taking more than five or ten minutes to teach the game to a new player. In general the game is quite quick since most games should only take around 15-20 minutes unless one or more of the players suffer from analysis paralysis.

Even though I am not a huge fan of Sudoku I had some fun with the card game. It is far from an amazing game but it is a simple and quick game where you don’t have to put a lot of thought into what you are doing. I could see Sudoku The Card Game working really well as a filler game between heavier games or a game that you can play with people that don’t really play many board/card games.

After playing Sudoku The Card Game I don’t really know what to say about the game’s strategy. The game has strategy but I don’t know how much it comes into play and whether it is really worth it. It just seems like it would be really hard to develop a long term strategy without having to analyze every possible move on your turn. You never are going to know exactly what the other players are going to do on their turns so you can only guess what the best move would be for a given turn. The only real strategy you could utilize would be to figure out which cards would be the easiest and hardest to play on future turns. You then just have to hope that another player doesn’t mess with that strategy.

While I see opportunity for strategy in Sudoku The Card Game, I would say that it is probably best to just find cards that you can play on your turn. It is probably best to get rid of cards that you have multiple cards of but otherwise there really isn’t a lot you can put into your decision without having to waste a lot of time analyzing different scenarios. With Sudoku The Card Game being meant to be a quick game you are probably better off quickly making a decision and moving onto the next game.

I think one of the biggest problems with the game is that it ends up being kind of unfair at times. I personally believe the game was designed in a way that it assumed that players would make mistakes and play cards incorrectly. Once everyone knows how to play the game though this rarely happens. Since you can take as much time as you want on your turn, you can easily check whether the number you want to play is already in that row, column and 3 x 3 grid. Unless you are careless you should rarely ever receive penalty points for making a mistake.

The game is not going to end with everyone scoring zero points though. This means that players are going to get penalty points from not being able to play a card on their turn. Whether someone is hoarding yellow cards or it is the end of the game and there are few spaces left to play a card, eventually someone is going to be backed into a corner. The problem is that outside of having amazing foresight whether you have to take penalty points is likely going to depend on luck. Draw the right cards at the right times and you likely won’t have to take any penalty points. Get the wrong cards and you likely will have to take several penalty points with no ways to avoid it. It doesn’t hurt that some players will also have to draw more cards and thus play more which gives these players a disadvantage in the game.

The bigger problem with the yellow cards though is that players can hoard them to force the other players to draw cards. In order to expand the gameboard, players need to play yellow cards. If no new yellow cards are played players will quickly run out of areas where they can play cards. If only one player has a yellow card in their hand, they should wait to play it for as long as they can. By not playing the card they limit the other players options and could even force them to take penalty cards. There are really no reasons for a player to play a yellow card until they have no other options. Holding onto yellow cards is one of the best strategies you can use in Sudoku The Card Game.

I have reviewed a lot of Reiner Knizia games here on Geeky Hobbies and unfortunately I would have to say that Sudoku The Card Game is one of the worst Reiner Knizia games that I have ever played. It is not a bad game but it just doesn’t live up to the other games that he has designed. It kind of feels like very little thought was actually put into the game. It wouldn’t surprise me if Reiner Knizia designed the game in a couple hours. Sudoku The Card Game is not a terrible game and fans of Sudoku will probably enjoy it. The game can get pretty boring though.

The components for Sudoku The Card Game are pretty cheap. All the game comes with is a deck of cards. The card quality is fine but there isn’t much to the game. The artwork is pretty bland and for some reason uses a text style that makes it pretty hard to distinguish between several of the numbers. Sudoku The Card Game is one of those games that you could easily make yourself with a stack of index cards. For a game made by Z-Man Games I was a little disappointed by the quality of the components.

Should You Buy Sudoku The Card Game?

Sudoku The Card Game is one of those games that aren’t terrible but aren’t special either. The game does a good job simulating Sudoku and the game is easy and quick to play. You can have some fun with the game if you like Sudoku puzzles and don’t mind that the game doesn’t require a lot of thought. I really don’t know what to think about the strategy. There is strategy but I just don’t think it is worth the effort since you won’t know what the other players are going to do. The game also has a significant reliance on luck and can just feel unfair at times.

If you don’t like Sudoku puzzles, the card game will not be for you. If you like Sudoku puzzles the recommendation gets a little trickier. If you want a multiplayer version of Sudoku and can find the game for cheap it may be worth picking up. Otherwise I would probably just stick to the puzzle books.

If you would like to purchase Sudoku The Card Game you can find it online: Amazon