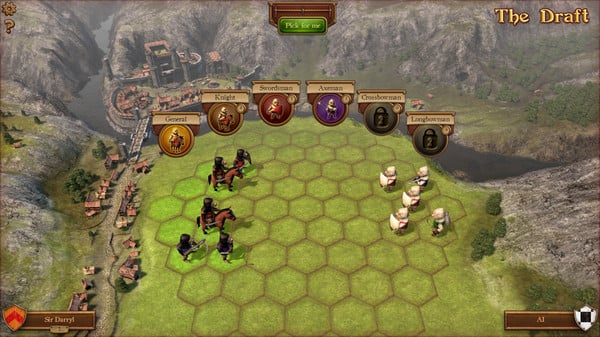 In Rise: Battle Lines two armies compete against one another to see who can wipe out the other players army first.

Each match begins with the units for the match being randomly selected by the computer. Players alternate picking units from the pool and placing them on their side of the battlefield. After all of the units have been placed, each player’s general is placed onto the board.

The combat in the game changes things up from a traditional turn based strategy game. The difference comes in how orders are given to units. In Rise: Battle Lines both players make their orders at the same time. Each player can choose to move as many of their troops as they want on any given turn. They choose where they want every unit to move (based on the unit’s movement range) and when they have given all of the orders that they want, they submit their orders and wait for the other player to complete their set of orders. Each player has up to two minutes to finish making their moves.

After both players have submitted their moves, the units start moving. The order in which units move depends on their proximity to their general and their movement stat. The closer a unit is to their general the earlier they will move. When a unit is within attack range, a player can order their unit to attack on their next turn. Except for ranged attacks, both units will attack each other and will do damage equal to their attack power. When a unit loses all of their health they are removed from the battle field.

Rise: Battle Lines is an interesting game. What initially drew me to the game was the fact that both players made their moves at the same time, each player drafted their army from a common pool of soldiers, and the game looked like it was a good blend of being accessible while also having some strategy. After playing the game for around a hour I would say that the game has a good foundation and with a little further development could be a pretty good game.

The area where Rise: Battle Lines really thrives is with its quick pick up and play style. The game explains how the entire game is played in just a couple text bubbles during your first game. The game is so simple that you can learn the whole game in minutes. There is enough strategy/randomness that you won’t master it for quite a bit longer though. What I really liked was that matches took 10-15 minutes at max. Since there is a time limit on your moves you can’t take forever to make your moves which helps if you are playing against a player that takes forever analyzing every move.

I think the decision to let units closer to their generals acts first was an interesting idea which could bring some strategy into the game. When you get more familiar with the game I could see forming strategy around strategically placing your general so you can attack before your enemy can. Turn order becomes really important in the game since it pretty much determines who will win a match. Putting your general at risk may be worth giving your troops a turn order advantage.

This leads to one of the problems that I had with the game which was that sometimes turn order is too important. It is sometimes hard to tell which unit will get to attack first and while not random it sometimes feels like it. Turn order is so crucial since in one match my brother and I were tied and both only had one archer left with the same amount of health. I ended up losing because my brother for some reason got to attack first on two consecutive turns. This felt a little unfair in my opinion since I didn’t know why he got to attack first in both rounds.

While the game has a decent amount of strategy to it, a lot of the combat seems to kind of come down to luck. In order to get an advantage over the other player you pretty much need to get lucky and guess what they are going to do on their next turn. If you guess right you can put yourself in an advantageous position but if you are wrong you could be put into a trap. This kind of makes the game feel like more of a guessing game than a strategic game.

The other mechanic that interested me about Rise: Battle Lines is the drafting mechanic. For the most part I liked the drafting mechanic. I like that it gives players options for the makeup of their army. My only concern with the draft is the randomization of the troops available for the draft. The game tends to give an uneven number of each type of troop so one player will be able to get more of one type of troop than the other player. Usually this is not a big deal except when the game only creates one of a particular type of unit which means the player that picks first can claim the only one of that troop type without the other player having a chance to get one.

I also kind of wish that the draft order would be slightly changed. Whoever picks first gets a pretty big advantage in the draft. To make up for that I wish the game would use a snake draft technique instead of a traditional draft. In Rise: Battle Lines one player picks, then the other, and then back to the first. I think the first player should pick one troop, the second player should get to pick two, the first player then gets two, and so on. This would make the drafting a little more fair in my opinion.

Finally I kind of wish the game had a couple more types of units. I know that the game is trying to stay simple so they don’t want to add too many troops but I think a couple more unit types would add a little more variety to the game. I worry that the six unit types (including the general) could get kind of boring quickly. Since there are only so many different types of troop combinations, you could pretty quickly end up playing the same fights over and over again.

While I haven’t played the game for a long time at this point (around one hour), if the concept interests you I think you can get quite a bit of fun out of the game. Rise: Battle Lines is not the type of game that I would play for hours at a time but is a game that I would play a quick game here or there. With the game only being $5 (will go up after the Early Access period) Rise: Battle Lines could be a great value for you. If you have other friends to play the game against or don’t mind playing against strangers, you should get your money’s worth out of the game if the concept interests you.

Should You Purchase Rise: Battle Lines?

If you are just looking for a single player game, Rise: Battle Lines is probably not going to be it. While the game does have a computer AI I don’t think it is going to be challenging for long. If you are looking for a highly strategic turn based game, Rise: Battle Lines will probably not be for you. The game has strategy but the game focuses more on being accessible and quick to play rather than featuring complex strategic decisions. If you are looking for a quick light strategy game that has some interesting ideas, at only $5 I think you can have quite a bit of fun with the game.