The New Yorker: Cartoon Caption Game is a 2006 party game from All Things Equal that is a part of the Balderdash-like family of games (this family includes games like Apples to Apples, The T-Shirt Game, Cards Against Humanity, and other games that task players with coming up with a creative response to something). In this game, players are shown a cartoon from The New Yorker and asked to come up with their own humorous caption for it.

As always, play begins with set-up. Each player picks out their playing piece (which is then placed on the start space) and takes an answer sheet and writes their name at the top of it. Also, place the cartoon cards face down on the board (and put the sand timer on the board as well). Finally, each player rolls the dice to see who gets to go first. The player who rolls the highest number gets the honor of starting The New Yorker: Cartoon Caption Game.

Every turn, the current player does the following actions. First, they roll the dice and move their playing piece that number of spaces on the board. Next, the current player turns over the top cartoon card and places it face up in the middle of the board for everyone else to see. They also start the 45-second sand timer. All players (except for the roller) now have 45 seconds to come up with and write down the best caption they can think of. 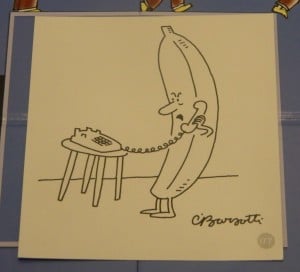 A sample cartoon you might be tasked with captioning in The New Yorker: Cartoon Caption Game.

When the timer ends, all answer sheets are collected, shuffled, and read out loud by the player to the right of the roller. The roller picks out their favorite caption and then attempts to guess which player wrote each caption (all other players need to make sure not to say anything that tips off the roller as to what their answer was or say whether their prediction was correct until the roller has made all of their guesses).

To finish off the turn in New Yorker: Cartoon Caption Game, the reader reveals the results. They tell the roller whose caption they picked as the winner and also how many correct predictions they made. The roller advances one space on the board for every correct match they made (they don’t receive any penalties for incorrect guesses). The player who gave the best caption advances two spaces.

Play moves around the table in a clockwise manner until a player has reached the “WIN” space on the board (it doesn’t need to be by exact count). For some reason, they also have to match at least two players’ captions correctly to win the game (otherwise they just stay on the WIN space until their next turn). However, the rules don’t say anything about what happens if a player reaches the “WIN” space by giving the best caption (since they have no chance to match captions if they aren’t the roller). The first player to do those two things is the winner of The New Yorker: Cartoon Caption Game.

If you’ve read a lot of our reviews, you probably know that we tend to like a lot of the games in the “come up with a creative response to some type of prompt” family. They tend to be some of our favorite party games because they can provide a lot of laughs and require some creativity to do well in them. However, even though I knew The New Yorker: Cartoon Caption Game was in this genre, I was a bit apprehensive about playing it (I picked my copy up months ago and just recently played it). I was worried that even though I have a decent sense of humor, I wouldn’t be able to come up with anything funny. Thankfully, my fears were overblown and I wound up doing pretty well. I also liked the game quite a bit. It’s not quite as good as Apples to Apples and the other top tier games in the genre, but I would recommend it if you like this type of game.

I was surprised with how easy it was to caption most of the cards. I though it would be very tough to come up with more than just a small handful of decent captions throughout the game but almost all of my captions were at least solid (as were my opponents’). While there are some tougher cartoons that are difficult to caption, most of them are surprisingly easy and offer multiple different possibilities that players can go with. Even if you get one of the tougher cards you should be able to come up with something decent for it.

However, in order to maximize the humor in The New Yorker: Cartoon Caption Game, I recommend you ditch one horrible rule that never should have been added. Take the sand timer and throw it out the window because 45 seconds is nowhere near enough time to come up with a good caption. We played a couple turns with the sand timer and quickly realized it needed to go to make the game funnier. I don’t know how All Things Equal thought 45 seconds would be sufficient (you can barely even write a mid-length sentence legibly in that amount of time) but at least it is a rule that you could easily ignore (and I suggest doing so). Just give everyone a reasonable amount of time to come up with their answers, it does make for a little more sitting around but it improves the game greatly.

Even though I like The New Yorker: Cartoon Caption Game, the rules are definitely not one of the game’s strengths. In addition to the unnecessary timer, I also thought the dice rolling mechanic was incredibly stupid. All it does is add more luck to the game for no reason at all. I have a feeling the game added it because the game board was way too long (and it definitely is, you need to move way too many spaces to get to the end and win the game) but they should have just cut the board in half instead. I would also suggest ignoring this rule.

I started the game thinking that guessing who gave each caption would be a decent mechanic but by the end of the game, I had mixed feelings about it. I don’t mind the rule but you could possibly earn more spaces by correctly guessing captions than you do for writing good captions. If writing the best caption was worth more spaces (or guessing correctly was worth less), I would have had no problem with this mechanic whatsoever (since it does test how well you know the other players you are playing with). However, when you could theoretically get five spaces for guessing all captions correctly in a six-player game (as well as getting up to six additional spaces on your roll), it kind of unbalances the game and makes it more beneficial to do well in those areas (guessing and dice rolling) than it does to write good captions (which is the whole point of the game).

The last complaint I have with The New Yorker: Cartoon Caption Game (a pretty small one) is that the game didn’t provide the actual caption used in the magazine. They could have easily put the actual caption on the back of the card for the reader to read at the end of the round (after everyone has already given their own caption). Also, this could have been used for a fun additional rule. The reader could read the actual caption with all of the ones the players’ made up. If the roller picks one of their fellow player’s caption first instead of the magazine’s, they could get an extra space or two (and if they pick the magazine’s they then pick the second best one and the winner gets the normal amount of spaces).

Even though I have insulted the game’s rules a lot, The New Yorker: Cartoon Caption Game is still a very solid game that will provide quite a few laughs, as long as you are playing with some semi-creative players. The cartoons are pretty funny by themselves (and very well done) and if your players are giving some witty captions to them, they will make them even funnier. Unless you are playing with people with no sense of humor whatsoever, you will get a lot of laughs out of this game.

The game is also a lot of fun to play. I worried for nothing because coming up with captions for these cartoons is actually pretty easy and a lot of fun. You will probably surprise yourself with the funny captions you come up with. For the roller, while they don’t get to think up a caption themselves, it is fun to see the different thought processes each player uses. That simple cartoon of a banana talking on the phone I showed earlier brought out a pun, a knock-knock joke, and an Arrested Development reference (“There’s always money in the banana stand!!!”) in our game.

One of the best aspects of the game is that it is relatively family-friendly (probably teenagers and up) yet can easily be made more raunchy if you want to. You can play The New Yorker: Cartoon Caption Game with your family using just PG-rated jokes then play another game with your gaming group where anything goes. The fact that the game can be gentle like Apples to Apples or raunchy like Cards Against Humanity is a pretty unique aspect to this game.

While The New Yorker: Cartoon Caption Game doesn’t come with a ton of cards (just 200), it does have decent re-playability especially if you have different groups of players to play with. If you play with different players, new voices will come up with funny new caption ideas you never even thought of (and you’ll probably come up with something new too). It doesn’t have the nearly infinite re-playability of something like Apples to Apples but if you enjoy the game it will be one you keep and dig out of the closet every so often.

The New Yorker: Cartoon Caption Game loses half of a ratings point for its terrible rules (even though they thankfully can easily be ignored and tweaked). However, the game still gets a very solid three out of five from me for being very funny and just plain a lot of fun to play. It isn’t perfect (especially the rulebook) but it is one of the better party games I’ve played and reviewed on the blog and definitely worth a try if you like cartoon captioning or this genre of game.

Can anyone please help me find the original captions for the New Yorker caption game? All the links seem to have expired.

This morning I checked out the link I left for the previous comment and it seemed to work for me. When I clicked on "Download Original Captions" it let me download an Excel spreadsheet which appears to have the captions. Otherwise on Board Game Geek there is a link to another site that apparently has all of the captions.

I can't seem to find the original captions. Could you please help me. Thank you.

I looked into it and found this link that apparently has the original captions for all of the cards in the game. I hope this helps.

Wise and Otherwise Board Game Review and Instructions | Geeky Hobbies

[…] plenty of people have tried to create their own games with some type of twist. One such game was The New Yorker Cartoon Caption Game that we looked at a while ago. Today we are looking at Wise and Otherwise which decided to combine […]