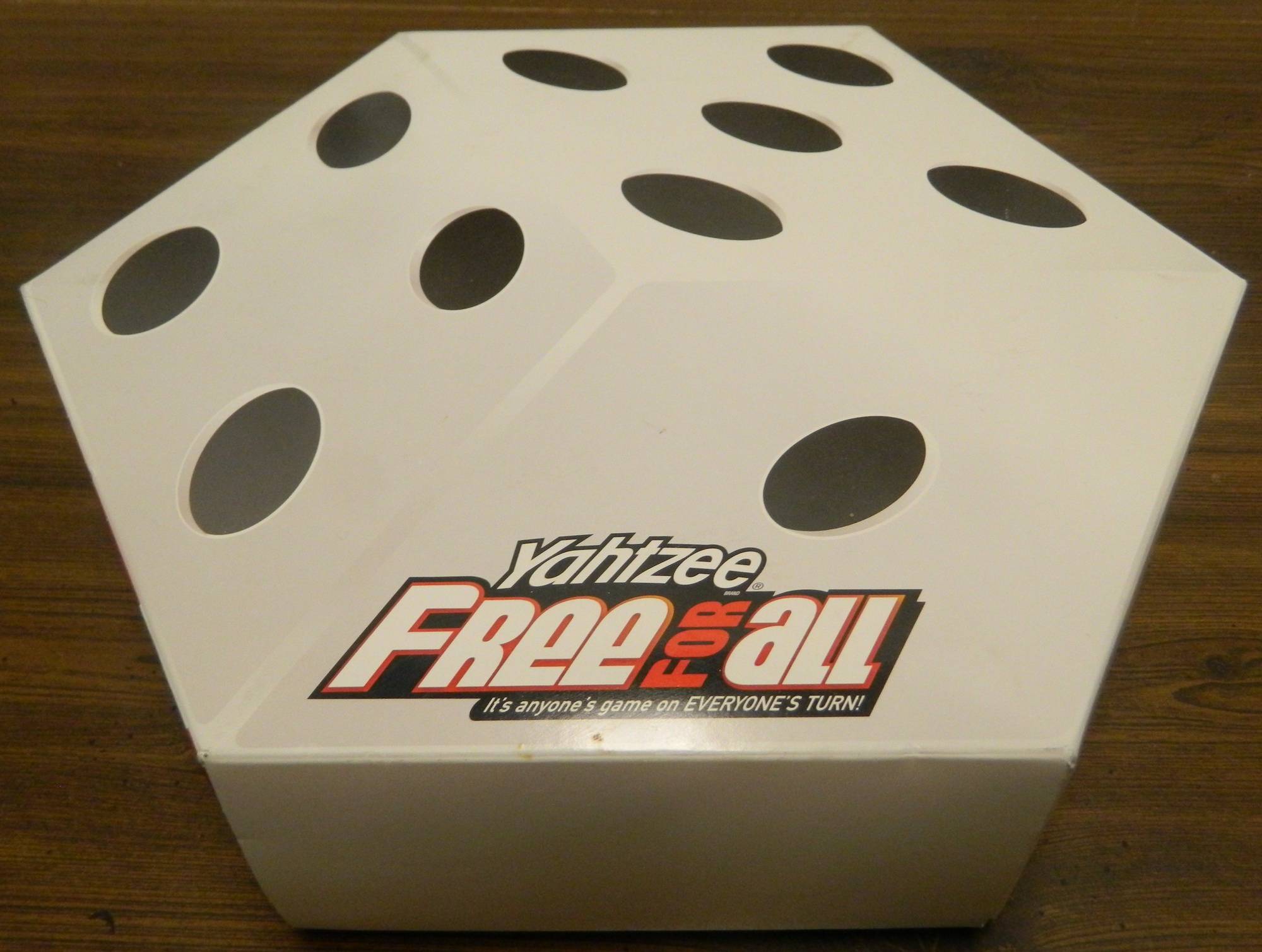 Ever since it was first introduced back in 1956, Yahtzee has been one of the most popular dice games of all time. Its popularity has spawned quite a few spinoff games over the years. One of those spinoff games was the 2008 game Yahtzee Free For All created by Richard Borg (Liar’s Dice, Memoir ’44). Yahtzee Free For All takes the dice rolling mechanics from the original game and includes a mechanic where players can steal cards claimed by the other players. Personally I have always found Yahtzee to be more of a take it or leave it game. I don’t mind playing Yahtzee but I have played quite a few dice games that are considerably better. I was intrigued by Yahtzee Free For All though as I thought it could add something new to Yahtzee ultimately making it a better game. Yahtzee Free For All succeeds in improving on its predecessor but ends up playing almost identically like a lot of other dice games.

How to Play Yahtzee Free For All

If a player has a card on their home space at the beginning of their turn, they place the card face down in front of them to indicate that the card is banked.

If after any of the three rolls a player matches one of the cards in the middle of the gameboard, they can take the card and place it face up on their home space. They take the chips underneath the card they took. If you ever roll six of the same number you can take one of the Yahtzee cards. The player will place the dice they rolled into their section of the gameboard so the other players can see what they need to beat in order to steal the card.

If a player doesn’t roll a combination that lets them claim a card, they end their turn without scoring any points.

My Thoughts on Yahtzee Free For All

While I thought Yahtzee Free For All was a solid game that I had fun playing, after playing so many different dice games over the years it is hard to deny that it is far from an original game. The idea of having three rolls to get different dice combinations has been used by a lot of dice games over the years as it was a mechanic first introduced by Yacht and the original Yahtzee. Yahtzee Free For All tries to change things up by having players claim cards for certain combinations that the other players can end up stealing. This may sound like an original idea and yet we have reviewed games in the past here on Geeky Hobbies that basically have the same mechanic (Easy Come Easy Go, Knights/Knatsch). Due to this fact Yahtzee Free For All is not as original as it first appears. Even though it is not highly original I am going to try to judge the game on its own merit and not the fact that it isn’t particularly original.

The basics of Yahtzee Free For All play like your typical dice rolling game. You get three rolls to try to and roll certain combinations. The mechanics are fun enough if you like dice rolling games. Basically if you like Yahtzee or other similar dice games you should feel right at home with Yahtzee Free For All. What distinguishes Yahtzee Free For All from its predecessor and other similar dice games is the idea of being able to steal other players’ cards. Once you claim a card all of the other players have one opportunity to steal the card from you. If it gets back to your turn and no one has stolen the card, you get to bank the card and will score the corresponding points at the end of the game. This is easily the best addition to the game as it actually succeeds at adding some player interaction to Yahtzee a game that you basically play alone and then compare scores at the end. Being able to have your card stolen by another player keeps you invested in the game on other players’ turns. Being able to steal cards from the players adds a little strategy as you may pursue a combination just to take points away from another player.

While I generally liked the ability to steal cards from the other players, it can be a pretty harsh penalty for a player to have one of their cards stolen. As most players will be able to meet one of the card combinations on their turn, having your card stolen leads to you losing points on all of the other players. This also leads to a situation where the players who are behind can try to gang up on the player in first in order to prevent them from banking cards. While the player in the lead could get a combo that would be hard to beat, if all of the players work together it is not hard to prevent a player from scoring points.

In most of these type of dice rolling games that I have played in the past, the best strategy is usually to try and steal cards from the other players whenever possible as you gain a card while an opponent loses one. This is one area where I actually think Yahtzee Free For All stands out. I really like the idea that whenever a player takes a card from another player or fails to take any cards, one chip is added to every card in the middle of the gameboard. As more chips get added to the cards in the middle, it becomes really enticing to go for one of the cards in the middle rather than trying to steal a card from another player. As each chip is worth one point, you could score several points claiming a center card with no risk of losing those points. The chips give players some interesting decisions as you have to decide between taking some free points or preventing another player from scoring points.

While on the topic of combinations I want to quickly mention that rolling a Yahtzee in the game is huge. It is pretty hard to roll a Yahtzee but if you are able to there is a good chance that you are going to win the game. I was pretty far behind the other players in a game due to bad luck and players stealing several of my cards. I eventually was able to roll a Yahtzee though which catapulted me to first place. One lucky roll took me from last to first and ultimately won me the game. With how hard it is to roll a Yahtzee it should be worth the most points but I think it is a little overpowered. Unless you roll poorly the rest of the game, a player that rolls a Yahtzee is likely going to win the game. While it makes sense to make the Yahtzee an even ten points, I think it should have been reduced to seven or eight points so it isn’t quite as powerful.

On the whole there is some strategy in Yahtzee Free For All but it is mostly driven by luck. You will occasionally have some decisions to make but they are usually pretty obvious as your first roll will likely show you what combination you should try to pursue. You will usually pursue whatever combination you roll the most dice for but you can decide to pursue a card that is worth more points or a card that you can steal from another player. With there not being a lot of strategy in the game, luck is usually going to be the deciding factor in who ultimately wins the game. The player who rolls the best is likely going to win the game.

In general I would say the components for Yahtzee Free For All are solid even though it has arguably one of the weirdest boxes that I have ever seen. The dice feel a little cheap and are nothing special. The cards are thicker than I would have expected. The artwork is nothing special but it gets right to the point. The chips are shaped strangely but are pretty solid. The weirdest thing about the components is that the game decided it had to have a box shaped like a die. That in itself is not that bad except that it makes the game harder to store. The hexagon shape leads to the instructions being shaped like a pinwheel though which is kind of a pain. The gameboard also ends up being used for the bottom of the box which forces it to fold up kind of strangely.

Should You Buy Yahtzee Free For All?

Yahtzee Free For All may have just tweaked the original Yahtzee with a few new mechanics but it accomplishes something most spinoff games fail to ever achieve: improving upon the original game. Yahtzee Free For All is a clearly superior game to the original Yahtzee due to some additional strategy  as well as more interaction between the players. The ability to steal combo cards from the other players adds some strategy to the game as you decide whether to steal a card from another player or try for one of the cards in the middle of the gameboard. Being able to steal cards potentially leads to players ganging up on the leader but is otherwise a good addition to Yahtzee. I also liked the addition of the chips being placed on the center cards as it gives players a reason not to always try and steal cards from the other players. I can’t say that I was a huge fan of the lack of variety in the combo cards though as similar games tend to have more variety. The biggest problem that I had with Yahtzee Free For All is that there are quite a few other dice games that play basically the same but are better than Yahtzee Free For All. While I had fun with the game, there are other dice games that I would probably prefer playing.

If you would like to purchase Yahtzee Free For All you can find it online: Amazon Yahtzee Free For All