Having been played for hundreds of years, Liar’s Dice is a name that is commonly used to refer to a group of bluffing dice games. In all of these games players roll dice and take turns making bids on the dice that were rolled. When someone thinks one of the players has bid too high they can call them out. The last player with dice remaining wins the game. While the game is in the public domain that hasn’t stopped many different versions of the game being created over the years. For example the 1993 version (named Call My Bluff) created by Richard Borg actually won the Spiel Des Jahres (Game of the Year) award. Today I am looking at the 2007 version of the game called Pirates Dice which was likely made to cash in on the movie Pirates of the Caribbean At World’s End. As Pirates Dice is basically the same as all of the other versions of Liar’s Dice, this review is for Pirates Dice and Liar’s Dice in general. While Liar’s Dice is a quick and easy to play bluffing game, it doesn’t live up to the reputation that it has built up.

How to Play Pirates Dice

A round begins with all of the players rolling their dice making sure their dice cup blocks the other players from seeing what was rolled. The player that is starting the round will then make the opening bid. When making a bid the dice from all of the players will apply even though a player can only see their own dice.  The dice that feature a skull or other wild symbol (depending on the version) will act as a wild for every number. 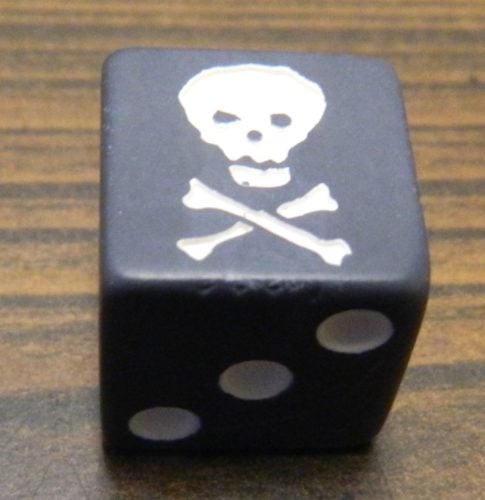 This dice is a wild so it will count as every other number in the game.

A bid consists of two things:

For example the player could make a bid of three fours.

After the initial bid is placed play passes to the next player clockwise. This player either has to raise the bid or challenge the other player’s bid. If a player wants to raise a bid they can raise it in one of three ways.

When the next player thinks the previous player bid too high, they can challenge the player’s bid. All of the players reveal their dice and one of two outcomes will happen.

When a player loses a dice it is removed from the game. The next round begins with each player re-rolling their dice. The player who lost a die in the previous round will start the next round.

When a player loses all of their dice they are eliminated from the game. The last player remaining wins the game.

My Thoughts on Pirates Dice

Despite being a pretty simple game that is in the public domain, I was surprised to see that Pirates Dice/Liar’s Dice is one of the higher rated board games of all time. At the time that I am writing this review the game is rated around the 500th best board game of all time. That might not sound that impressive but there have been 10,000-100,000 boards games created so placing in the top 500 is quite good especially for such an old game. I am generally excited to play games in the top 1,000 because they rarely disappoint. I have to say that I was a little disappointed with Pirates Dice though. Its not a bad game but I don’t think it deserves the acclaim that it receives.

On the positive side the game is really easy to pick up and play. Basically you just roll the dice, count up how many of each number you rolled, and estimate how many of each number you think the other players rolled. The players then take turns raising the bid until someone thinks the previous bid was too high. While it takes a little time for some players to figure out what constitutes raising the bid, the game is otherwise quite easy to pick up and play. Pirates Dice has a recommended age of 8+ and that seems to be right in my opinion. Being so simple Pirates Dice is a game that could work with people that don’t play a lot of board games.

While Pirates Dice only has one real mechanic, it leads to some interesting gameplay. What is interesting about the game is that each player has just a fraction of all of the information in the game. You know the numbers that you rolled and have to make an educated guess on what you think the other players rolled. Outside of being able to read the other players or cheating, your best tool is using probabilities to determine the likelihood that a bid could have been met. As dice are removed from the game each player will know about different numbers of the total dice available. By using probabilities to your advantage you can increase your odds of catching other players bluffing while avoiding bluffing yourself.

While I don’t hate bluffing games I have never been a huge fan of pure bluffing games. Due to the fact that none of my group are good at reading people these type of bluffing games just feel like exercises in guessing to us. In Pirates Dice we basically based our decision on whether to raise or call a bluff based on the dice we could see, probabilities, and gut feeling. While there were cases where we knew for sure whether a player was bluffing or not (due to the dice that we could see) most of the time we ended up having to guess. The game obviously needs some hidden information but I kind of wish the game had a little less than it actually does. I kind of wish the game had some community dice that all of the players could see. With so much hidden information it is hard to make educated guesses in the game.

Other than using probabilities and being able to read the other players, your success is going to come down to luck. Generally speaking rolling wilds and several dice of the same number gives you an advantage when bidding since they let you raise the bid without blindly guessing. Your place in the bidding process is also important because eventually there is going to be a point where it is going to be really hard to tell if the player is bluffing. You could think the player isn’t bluffing which will force you to bluff in order to raise the bid. While good bluffers could sometimes get themselves out of one of these situations, having luck on your side gives you a pretty big advantage in the game.

The biggest problem that I have with Pirates Dice is the fact that the game has a leader problem. Due to how the game is played the player who is in the lead has an advantage over the other players. The leader has a built in advantage because they have control over the most dice and thus have more information than the other players. The leader having more information wouldn’t be such a problem except that it tends to lead to the leader getting further and further ahead of the other players. This can snowball to the point where the leader wins in a landslide. If a player gets out to a decent lead it feels like a forgone conclusion that they are going to win the game which takes away from the enjoyment of the game.

As far as components it is kind of hard to say a lot about Liar’s Dice in general as there are so many different versions of the game. In most versions of the game you get dice and dice cups. In the Pirates Dice version of the game the components are pretty nice. The cups show some nice detail and are sturdy. They kind of smell though. The dice are nice because the numbers are engraved into the dice so you don’t have to worry about the paint fading off. As far as the 1987 Milton Bradley version, the dice are nice since the numbers are engraved into the dice. I also like that the game includes enough dice for six players. The dice cups are kind of bland though.

The biggest problem with the components is the simple fact that you don’t actually need an official copy of the game. As the game is public domain you can easily just use normal six sided dice to play the game. All you actually need to play the game is five six sided dice for each player that will be playing the game. Instead of the special dice you could just have the one side act as a wild since the one side is the side that is replaced by the wild symbols in the official versions of the game. While it would be nice to have a dice cup for each player, you could easily use one of your hands to block your dice from the other players. You can probably find a copy of Liar’s Dice for pretty cheap but if you already have a lot of six sided dice lying around you could just as easily use those to play the game.

Should You Buy Pirates Dice?

Pirates Dice/Liar’s Dice is a highly regarded bluffing dice game that has been around for hundreds of years. The game is far from terrible but I think it is overrated. The game is quick and easy to play and has some interesting decisions to make. The problem comes from the lack of information. Each player only knows a small portion of the information which means players have to mostly rely on guessing and being able to read the other players. This gets even worse if a player gets out to a lead because they will have an unfair advantage while bidding since they will have more information than the rest of the players. There is also the fact that you can easily make your own version of the game with a bunch of six sided dice.

If you are not a big fan of pure bluffing games Pirates Dice/Liar’s Dice will probably frustrate you with its’ lack of information and reliance on guessing/reading the other players. If you like pure bluffing games though I think you will like the game quite a bit. Your decision to purchase the game will come down to whether you want an official set or if you just want to use a set of six sided dice.

If you would like to purchase Pirates Dice you can find it online: Amazon (Pirate’s Dice)

How to Play Clue: Liars Edition Board Game (Rules and Instructions)

May 2019 TV Premieres Schedule (Every New Series, Season, Movie, and Special and Their Premiere Dates)
Click here to cancel reply.