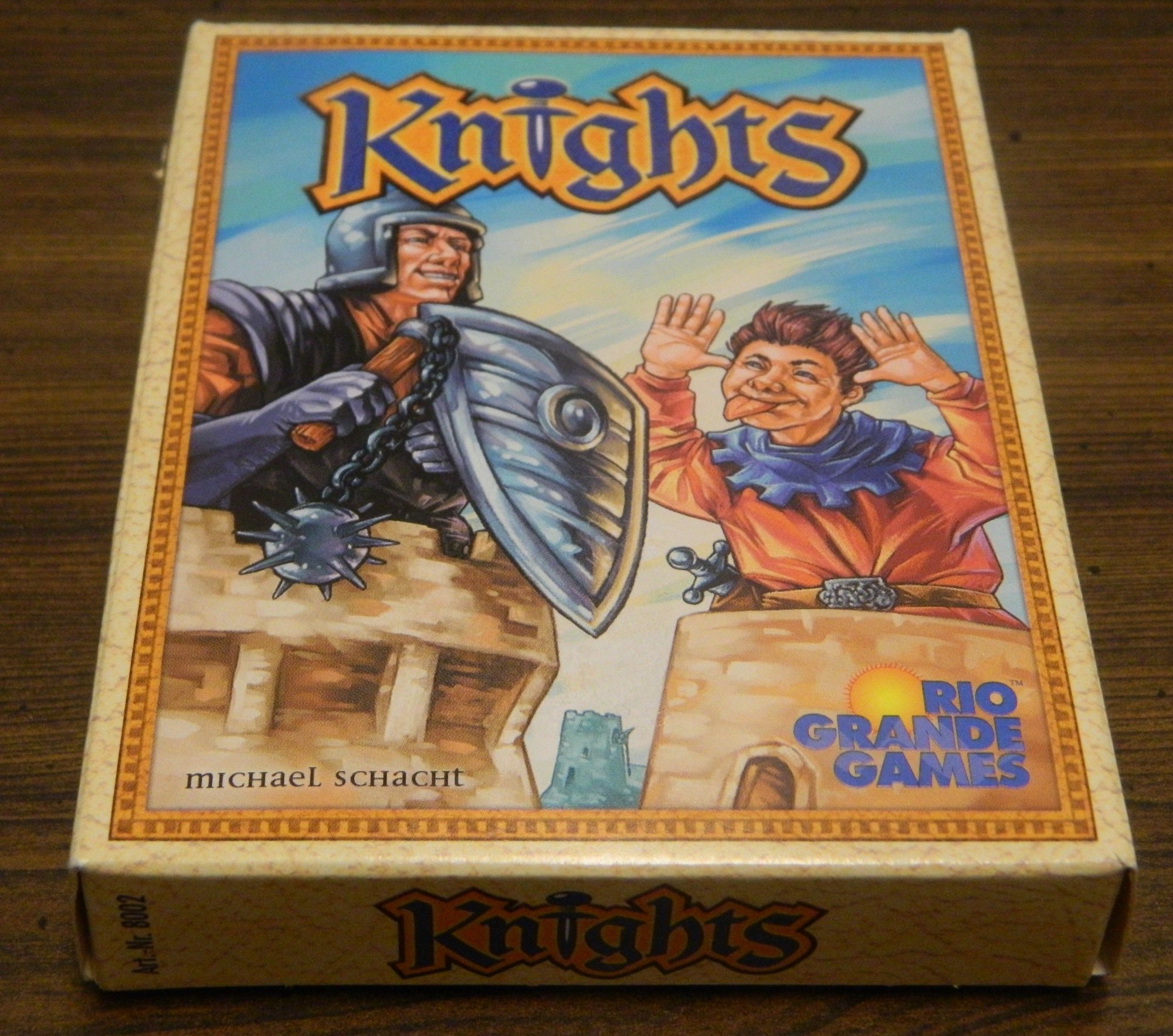 Michael Schacht is a board game designer that has been making board games since the late 1990s. While we have looked at Bull in a China Shop, California, and Crazy Creatures of Dr. Gloom, Michael Schacht is probably most known for creating the Spiel Des Jahres award winning Zooleretto. Today we are looking at one of Michael Schacht’s earlier games Knights (also known as Knatsch) which is a dice game similar to Yahtzee that adds a competitive component and special powers. While Knights has some interesting ideas, the game fails to really differentiate itself from other dice games.

How to Play Knights

Remove the five blank cards from the game. The three goal cards are placed in the center of the table. Take six different colored castles from the deck and deal one to each player. The castle cards that aren’t given to one of the players are shuffled in with the rest of the cards. Once shuffled the cards are separated into two approximately equal sized decks with the top card from each deck being flipped over. Determine the first player in any agreeable manner.

Choosing A Card to Capture

On a player’s turn they will choose which card they would like to try and capture. Before choosing a card the player is able to swap the card on one of the stacks with the next card in the stack. The card that is removed is put on the bottom of the stack. If the player wants one of the cards on the top of one of the two stacks they can try to capture it if they don’t already have a card of that type (a player can capture multiple tournament cards).

Instead of choosing one of the cards from the stacks, the player can try to steal a card from another player as long as they don’t try to steal that player’s last castle card. A player is unable to try and take a card that they already own and they can’t take a tournament card from another player. If a player is unable to take any of the available cards they can keep swapping out the top cards from the stacks until they find a card that they can capture.

There are three different ways that a player can beat the combination.

#1 Rolling More Dice of the Same Number: If the card shows three threes on it, rolling four of a kind will beat the combination. Die Card: The card acts as a die of the number shown on the card. A player can own one card for each die number. Catapult: The player can roll the dice four times when trying to steal a castle from another player. Tournament Champion: The player can roll four times in every tournament even tournaments that they didn’t start. Stack: The player is able to change the top card on a stack twice instead of once on their turn. Castle Guard: On a player’s turn they may put this card on up to two castles which prevents other players from stealing those castles until they capture the castle guard card. A player can change the castles that the guard is protecting on their turn. Betrayal: This card changes the requirement to capture any castle card from a stack to three twos and a four for the player controlling the card. Protection: The player controlling this card does not lose a castle when they fail to defeat the king.

There are three different ways to win a game of Knights.

The first player to reach one of these three conditions wins the game.

My Thoughts on Knights

If I had to describe Knights in a couple words I would say that it is Yahtzee with a couple tweaks. Like Yahtzee you roll the dice trying to get different combinations of dice. You can roll the dice a couple times to improve your roll hoping to roll high enough to score points or capture cards. Unlike Yahtzee though you are only looking for sets of the same number in Knights. The basics of Knights are very similar to Yahtzee but Knights adds two mechanics that add a little variety to the game.

While you will never be able to develop a deep strategy in Knights, the game does present a couple different ways to win the game. This gives players a few options on how to approach the game. The most straightforward strategy is to just acquire four castles. If you are pursuing this strategy you are probably going to mostly focus on stealing castles from the other players and stacks instead of going after a lot of special cards. If you are going after the king victory you are going to go after castles but you also want some special cards that will make it easier to beat the king. It also wouldn’t hurt to get the card that prevents you from losing castles if you fail to beat the king. The final strategy is to try and focus on tournaments. If you are going for the tournament victory you are going to want to start as many tournaments as possible since starting the tournament gives you an advantage in it.

The other mechanic that distinguishes Knights from Yahtzee is the fact that you can go after the cards owned by the other players. I have never been much of a fan of take that mechanics so I don’t have a really strong opinion on this mechanic. The mechanic works pretty well and I think Knights would be a pretty bad game without it. I usually don’t like take that mechanics though since your fate depends on whether the other players decide to target you. I do like that Knights actually gives you a chance to defend some of your cards when a player tries to take them.

Basically that is all there is to Knights. It should come as no surprise that Knights is a pretty simple game. If you play a lot of dice games you should have no problem with Knights. I can’t see it taking more than a couple minutes to teach the game to new players. While the game has an estimated length of 20-40 minutes I personally would say that most games of Knights will lean towards the shorter side of that estimate. The only games that I can see taking 40 minutes are games where players are constantly stealing cards from one another.

I would say that the biggest problem with Knights is that it is too easy to capture cards. I never thought I would have said that but I actually think the game suffers from being too easy. In the majority of your turns you likely will be able to capture a card. I think this is due to the combinations on the cards not being that hard to roll. Almost all of the cards only require you to roll three of a kind and then beat the other die printed on the card. Since you are given six dice and three turns this is surprisingly easy to accomplish. While you will lose all of the sixes that you roll, unless you roll poorly you should still have enough dice to beat the combination. When you add in the special cards it becomes even easier to capture cards.

Usually I would say that it is good that players will capture a card on most of their turns but I think this works against the game’s strategy. With it being so easy to capture cards the game can end before anyone is even able to form a strategy. One of the players could just capture a lot of cards quickly and leave all of the other players in the dirt. If cards were harder to capture, players would put more thought into whether to go for a safer card or the best card available. While some cards are harder to get than others, all of the cards are pretty easy to get which doesn’t really persuade players away from going after the harder cards.

These issues create a problem in Knights where the rich can easily get richer. As a player acquires more cards it becomes easier to acquire even more cards. While the special cards don’t directly help you win the game, the more special cards that you have the easier it becomes to capture the cards you actually need to win the game. The most powerful of the special cards are the dice cards. Since the dice cards act as another die, they basically give you free dice which makes it really easy to beat combinations. While I like the idea of getting additional dice, I think these cards are a little too powerful where if a player has multiple of them they are almost unstoppable.

The only thing that stops a player from sailing away with the victory is the fact Knights encourages players to gang up on the leader. Outside of the player getting a chance to defend their own castles, there is no difference between taking cards from the stack or another player. If another player has a card you want you might as well try to steal it since if you succeed you get a card while also taking a card from the other player. The leader may be able to fend off some of the players, but unless they are very lucky they will eventually fall to the might of all of the other players. While I like that stealing cards from other players lets players catch up, I don’t think it is fair when a player can go from first to last just because all of the other players decided to gang up on them.

The component quality of Knights is solid. The artwork is pretty good and the cards are designed in a way that makes them easy to read. The game’s components are kind of dull though. When you combine in the theme that doesn’t impact the gameplay and it kind of feels like the theme was pasted onto Knights. The theme doesn’t detract from the game but it feels like almost any other theme could have been added to the game and it would have made no difference to the game. Since theme is generally not that important to me it isn’t a big issue, but the theme might bother people that really care about it.

Should You Buy Knights?

Basically Knights is a very average game. The game doesn’t really do anything wrong but it also doesn’t really do anything to distinguish itself from other dice rolling games. If you like dice games you will probably have some fun with Knights. Knights basically takes the premise of Yahtzee and includes special powers and a mechanic where you can go after the other players. The biggest problem that I had with Knights is that it is too easy to capture cards which leads to runaway leader problems as well as a motive to gang up on the leader. While it is still fun, Knights feels like another average dice rolling game which is below the standard set by a lot of Michael Schacht’s games.

If you like dice games and think the idea of special powers sounds interesting for a dice game, I think you can get some enjoyment out of Knights. I would wait for a good deal on the game though. If you don’t really care for dice rolling games though you can find a lot better dice games than Knights.

If you would like to purchase Knights you can find it online: Amazon