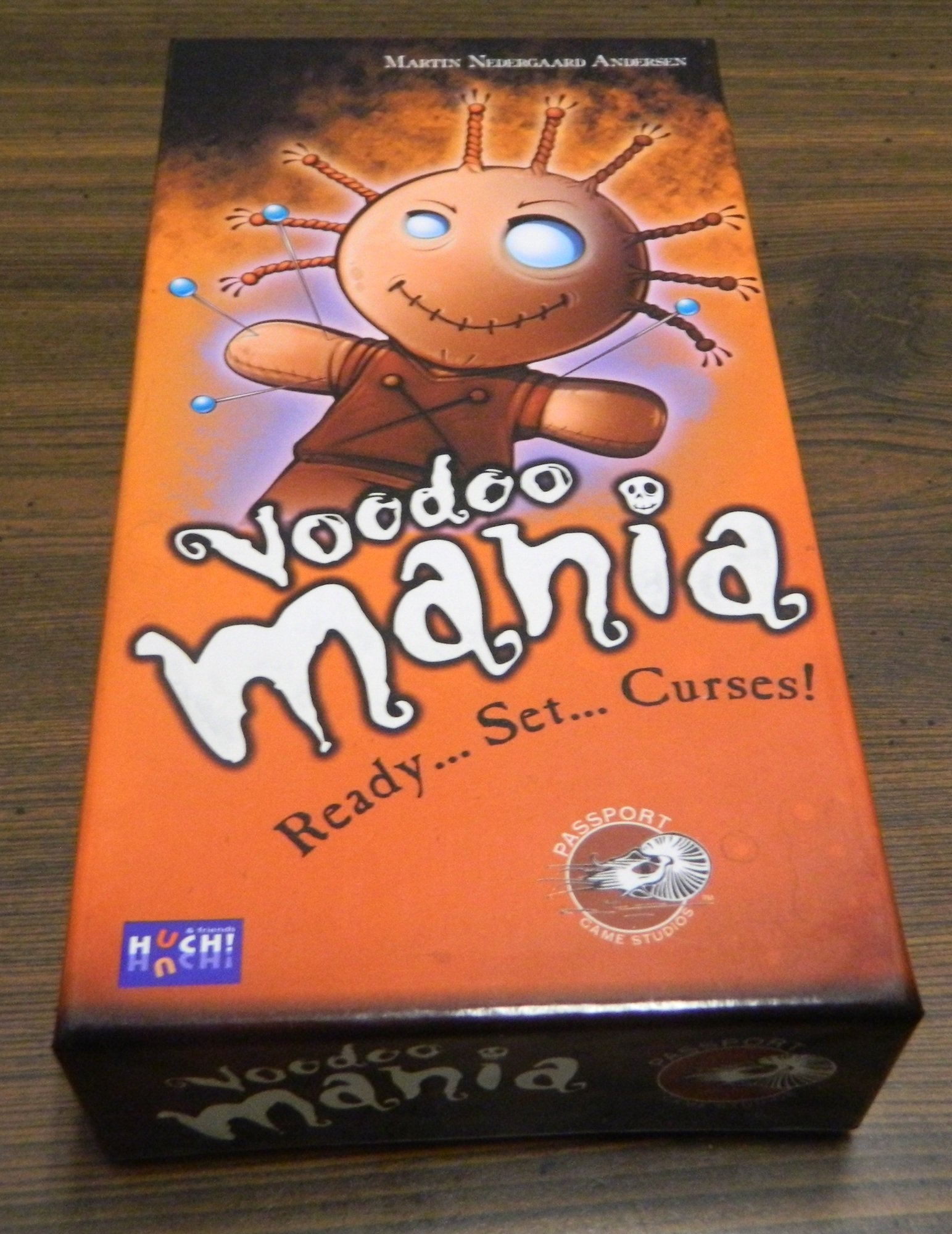 Over the last couple years I have looked at quite a few speed games. At least in my experience you can usually expect a pretty solid game from most games in the speed genre since it is pretty hard to mess up a game where you need to play cards/tiles/etc as quickly as possible. While you don’t see many bad speed games, you also don’t see a lot of great speed games either. The genre is kind of stuck in a rut where most of the games are just slight variations of one another. So does today’s game Voodoo Mania break out of the speed game rut of being a solid but unspectacular game? Unfortunately it does not.

How to Play Voodoo Mania

Players stack their cards into a draw pile and take the top three cards from their pile.

Voodoo Mania is a speed game where there are no turns. Players can play cards whenever they are able to. Once the game begins all of the players look at the top card of the pile in the middle of the table. In Voodoo Mania there are five different ingredients (doll, mask, potion, amulet, and top hat) and five colors (green, yellow, red, blue and purple). Each side of every card shows four of the ingredients in four of the colors. The players need to figure out what color and ingredient are missing from the top card and then play a corresponding card. The players can play any card that matches one of these criteria:

When a player plays a card they tell the other players what card they played. For the first option they say the color and ingredient that was missing. For the second option they call out “voodoo”. If they were correct in playing the card, all of the other players will take one of the cards from the bottom of the discard pile and add it to the bottom of their pile. If there are not enough cards for every player to draw a card, start with the player left of the player who called “voodoo” and each player takes a card until there is only one card left.

A round is played until one of the players has played their last card. Play immediately stops and all of the players who still have cards count up how many they have remaining and receive the corresponding number of points. The players will play a total of three rounds. Whichever player has the least points after the three rounds wins the game. If there is a tie, all of the tied players share the victory.

After reading the how to play section, Voodoo Mania probably sounds similar to quite a few other games that I have reviewed here on Geeky Hobbies in the past. I definitely won’t disagree with you as the game does share a lot in common with many other speed games that I have played in the past. Basically Voodoo Mania is another game in the long line of games where you need to quickly recognize what is missing and play an appropriate card. While Voodoo Mania slightly tweaks this formula, there are many other games out there that do something very similar to Voodoo Mania.

It shouldn’t come as much of a surprise that like most speed games Voodoo Mania is a pretty easy game to pick up and play. Basically you need to just look at the current card to see what color and ingredient are missing and find an appropriate card to play. With the rules being so simple, it takes just minutes to learn how to play the game. While the game is easy to play I actually think Voodoo Mania is harder than quite a few speed games. While the premise is pretty basic, it actually takes more thought that you would think to figure out what cards you can play. First you need to determine which color and ingredient are missing. This isn’t that difficult but you then have to find a card that either has the missing ingredient of the missing color or you need to find a card that is also missing the same ingredient and color.

One area that Voodoo Mania actually differs from a lot of speed games is that it actually takes longer than most games in the genre. Voodoo Mania is far from a long game but three rounds of the game will probably take around 10-20 minutes. The length can mostly be attributed to the number of cards that each player gets in the game. While the game is probably faster with more people since each player will get less cards, when you have to get rid of 30+ cards it will take time. Usually players should be able to play cards every 10-20 seconds but that is still longer than a lot of these speed games. While it will still work as a filler game, Voodoo Mania won’t take minutes to complete like Blink does.

While Voodoo Mania has two different ways to play cards, I will admit that my group basically only ever used one of them. Maybe it was just my group but we rarely ever used the second option for playing cards. It just doesn’t seem to be worth it since it is harder to find these cards. While it is nice to force the other players to draw cards, the extra time it takes to play these cards just doesn’t seem to be worth it. With Voodoo Mania being a speed game you likely will lose out on playing quite a few more cards than you would force the other players to draw. If you are good at finding these cards you can benefit greatly but otherwise you are probably better off just playing cards that meet the first criteria.

The word solid is basically the perfect word to describe Voodoo Mania. The game really doesn’t do anything wrong and you can have fun with the game if you like speed games. The game is not highly original though. There really isn’t much in the game that you can’t find in many other games. Voodoo Mania is also the type of game that you will put away after only a game or two and then come back to another day. Basically Voodoo Mania would work well as a filler game to play between other games.

Should You Buy Voodoo Mania?

Voodoo Mania is basically a very solid but unspectacular speed recognition game. I like the speed genre and I enjoyed playing Voodoo Mania. The mechanic of finding the missing color and ingredient and playing a card based on what is missing is fun. I was actually surprised that the game was more challenging than I was expecting.  While Voodoo Mania is a fun game I wouldn’t consider the game to be highly original.

Basically if you like speed recognition games I think you will enjoy Voodoo Mania. If you already own a similar speed game, Voodoo Mania is not special enough to warrant a purchase. If you can find the game for a couple dollars though it is probably worth picking up.

If you would like to purchase Voodoo Mania you can find it online: Amazon