When you talk to board gamers, Fluxx seems to be one of those games that people have wildly different opinions on. There are a lot of people that love the game while there are other people that can’t stand it. I personally would classify myself as somewhere in the middle as I like playing the various versions of Fluxx but I recognize that it is not a perfect game. There have been plenty of versions of Fluxx released over the years with most versions playing basically the same with only slight tweaks. When I heard about Math Fluxx though I was intrigued because I was interested in seeing how math was going to be added to the Fluxx formula. While Math Fluxx plays a lot like the other versions of Fluxx, the little tweaks to the formula actually create some interesting new options for the game.

How to Play Math Fluxx

If you have ever played a Fluxx game before you already know everything you need to play Math Fluxx so you can skip the how to play section.

Place the basic rules card in the center of the table. All of the players need to decide whether they would like to use one of the meta rule cards. If the players choose to use one of the cards it is placed on the table and the rules printed on the card are followed. Otherwise the meta rule cards are put back into the box. The rest of the cards are shuffled and three cards are dealt to every player. The remaining cards form a draw pile. Whichever player chooses to draw a card first becomes the first player.

Math Fluxx (like all Fluxx games) is an ever changing game. At the beginning of the game every player will draw a card and play a card on their turn. Additional rule cards will be played throughout the game though which will change the basic rules. 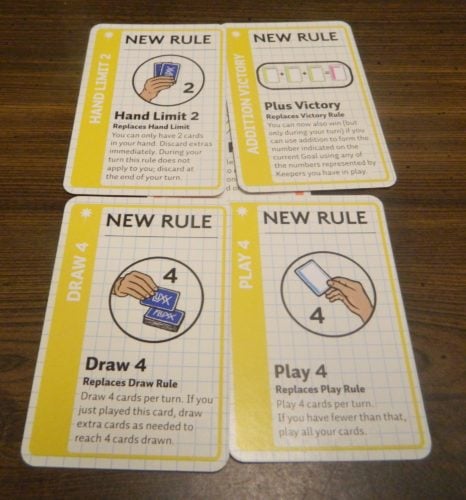 At this point there are four different rules in place. Players will draw and play four cards each turn. Players can only have two cards in their hand at the end of their turn. Finally players can add cards together to reach the number on any goal card.

The basic steps you will follow on your turn are as follows:

In Math Fluxx there are four different types of cards that you can play on your turn. Each type of card has a different effect on the game. 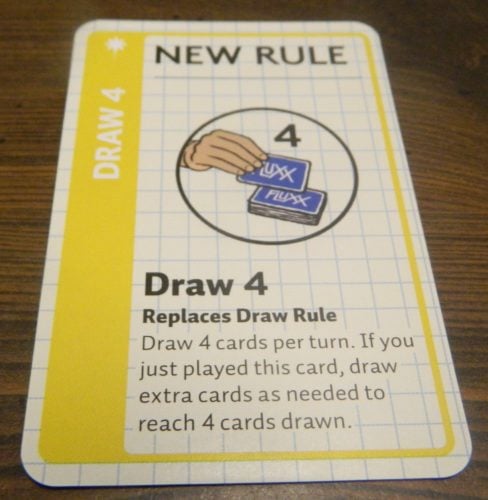 New Rule Cards: When a player plays a new rule card (yellow border) it will be played to the middle of the table. This rule goes into effect immediately. If the new rule card contradicts any rule cards already on the table (other than the basic rule card), the previous rule card is discarded and the new rule card replaces it. With new rules going into effect immediately, all players must comply with the new rule which includes discarding cards from your hand or keepers from out in front of you (the current player can wait until the end of their turn). If a card is played that forces players to draw or play more cards, the current player has to draw/play additional cards to reach the new limit. 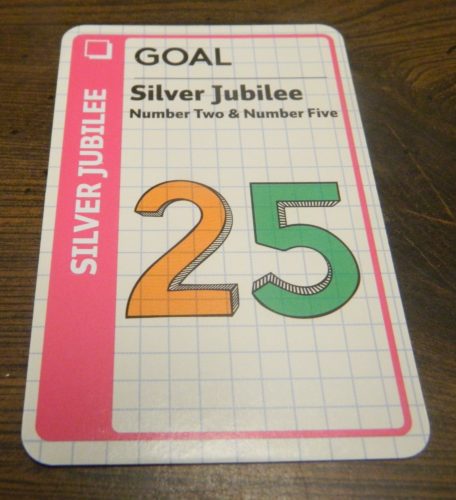 Goal Cards: When a player plays a goal card it replaces any goal card that is currently in the center of the table. Whichever goal card is in the middle of the table is the current winning condition for the game. If any player meets the conditions on the goal card, they will automatically win even if it is not currently their turn. 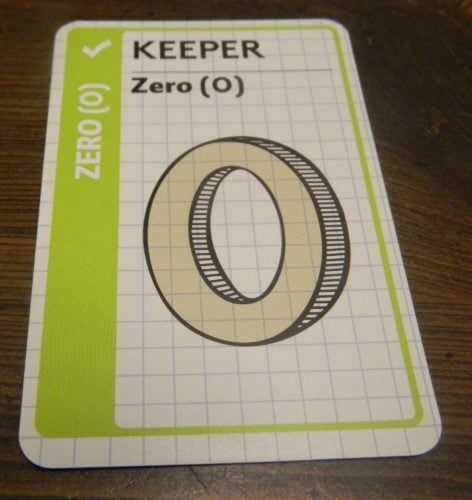 Keeper Cards: Keeper cards are played out in front of the player who played the card. These cards are used to fulfill the conditions on goal cards. Players can have as many keeper cards as they want in front of themselves unless there is a keeper limit. If there is a keeper limit the player has to discard down to the limit at the end of their turn. 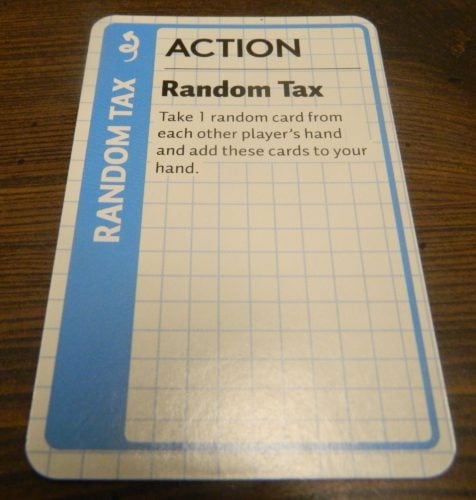 Action Cards: Action cards are played for their effect and are then discarded. When an action card is played, you must perform all of the actions on the card that are possible even if they hurt you. 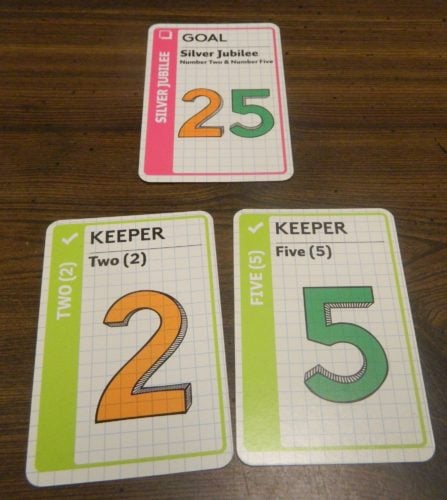 This player has both the two and the five keeper card so they met the current goal and have won the game.

My Thoughts on Math Fluxx

Being part of the Fluxx family of games, Math Fluxx shares a lot in common with the other games in the series. The basic mechanics in the game are exactly the same as every other Fluxx game that I have ever played. With Math Fluxx playing a lot like every other Fluxx game, if you have already played a Fluxx game you should already have a good idea of how much you will like Math Fluxx. If you like Fluxx I would be surprised if you didn’t like Math Fluxx. If you don’t like Fluxx though I can’t see you enjoying Math Fluxx either.

Seeing as we have reviewed a couple other Fluxx games on Geeky Hobbies in the past (Fluxx, Firefly Fluxx) I am not going to spend a lot of time talking about my thoughts on Fluxx in general. I have enjoyed Fluxx in the past and the same holds true for Math Fluxx. Fluxx has never been considered a really strategic game and relies quite a bit on drawing the right cards at the right time. While Math Fluxx somewhat fixes this reliance on luck, it is still very prevalent in the game. Fluxx is not meant to be a highly strategic card game though. It is meant to be a quick game to learn and play that you can just sit back and enjoy. In these ways Fluxx does a very good job.

Instead of talking about Fluxx in general I want to talk about what is different in Math Fluxx. The most obvious difference is that it is “Math” Fluxx. So you might be wondering if Math Fluxx is just an educational version of Fluxx. Along with Chemistry Fluxx (Board Game Geek, Amazon

) Looney Labs appears to be trying to create an educational line of Fluxx games. After playing Math Fluxx I would say that it is and isn’t an educational game. I could see Math Fluxx working pretty well as a tool to help children work on their basic math skills (addition, subtraction, multiplication, division). While kids can work on their math skills with Math Fluxx, that is mostly a secondary objective of the game. The main idea of the game is to add some new mechanics to the Fluxx formula. If you want to use the game for educational purposes it should work pretty well but you also don’t have to worry about it being too focused on being educational.

While Math Fluxx is very similar to normal Fluxx, I think you could make an argument that Math Fluxx is better than normal Fluxx due to the math mechanics added to the game. All of the goals in Math Fluxx involve getting different sets of keepers which are all numbers in Math Fluxx. This seems like every other Fluxx game at first. With the keepers being numbers though Math Fluxx is able to add some additional mechanics where you can add, subtract, multiply, or divide your keepers in order to arrive at the number on the current goal card.

While this might seem like a simple addition it actually adds a decent amount to the game. In most Fluxx games each keeper can only be used for two to three of the goals and doesn’t have much value outside of those couple goal cards. Being able to add, subtract, multiply and divide gives most keepers value for every goal though. This actually adds a decent amount of strategy to the game as you try to figure out ways to use the different cards in your hand to reach the total on the current goal card. With many more options to win a hand, you can actually put a lot more thought into choosing which cards you want to play on your turn than a normal game of Fluxx.

There is a catch to this mechanic though since the basic rules don’t allow you to add, subtract, multiply or divide. These rules come into play when the appropriate rule card is played in the game. This means that in a normal game these mechanics don’t come into play as often as you would think. While they come into play every so often, they can come and go really quickly. This is why I would recommend using the meta rules for the game. These meta rules stay in place for the entire game and basically force these additional math rules to be used in the game.

The other difference I noticed between Math Fluxx and other versions of Fluxx is that the “take that” mechanic does not seem to come into play as often in Math Fluxx as it does in other versions of Fluxx. One of the biggest elements of the Fluxx franchise is that you can really mess with the other players. Most games of Fluxx involve players stealing cards, forcing players to discard cards or even changing out the winning conditions just as another player is about to win the game. With the play of one card you can ruin another player’s plan.

While the “take that” mechanics are alive and well in Math Fluxx, they just didn’t seem as prevalent as in other versions of Fluxx that I have played. I don’t know if there are just less “take that” cards in the deck or we just didn’t draw them or have an opportunity to use them. You can still really mess with people in Math Fluxx but it just doesn’t seem to happen as often. I don’t know if I would consider this a positive or a negative for the game. I am not a huge fan of “take that” mechanics so I kind of see it as a positive. These mechanics are a big part of Fluxx games though so it might disappoint some people that like this mechanic in Fluxx games.

Should You Buy Math Fluxx?

As a whole Math Fluxx plays a lot like your typical Fluxx. There is a high reliance on luck but the game is also really easy to learn and play. The game is fun if you don’t mind that your fate in the game is quite reliant on luck and the other players. While most of the game plays like your typical Fluxx the math mechanics actually add more to the game than I was expecting. Being able to combine cards together in order to meet goals actually adds a decent amount of options/strategy to Fluxx which improves the game in my opinion. The theme does suffer a little though since math is never going to compete with the themes of the other Fluxx games.

If you have never been a big fan of Fluxx or you don’t really like the idea of adding math mechanics to Fluxx, Math Fluxx is probably not going to be for you. If you are a fan of Fluxx though and are looking for some interesting little tweaks to the game, I think you will enjoy Math Fluxx.

If you would like to purchase Math Fluxx you can find it online: looneylabs.com, Amazon