Players try to score as many points as possible by playing colored tiles to form hexagons.

Shuffle the tiles. Each player draws two tiles for themselves that only they can see. Four tiles are then drawn and turned face up to create the communal pool. The rest of the tiles are placed face down off to the side.

Each player selects a color of tokens that they will use for the game. The players randomly choose who will start the game.

During a player’s turn they must play at least one tile but can play as many tiles as they want. A player can play their own tiles and tiles from the communal pool. The first tile played to create the gameboard can be any tile. Every other tile has to played next to another tile. Tiles can only be played next to a tile next to them on the color wheel. Each tile can be played next to the following tiles: 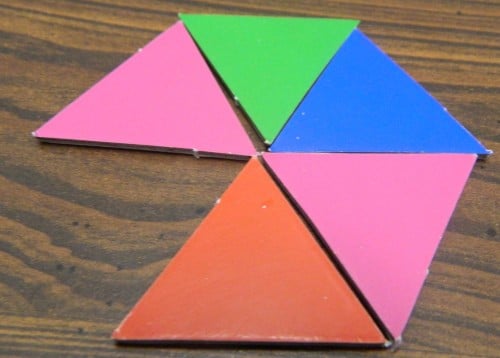 This is an invalid move because the purple tile could not be played next to the green tile since they are not next to one another on the color wheel.

If a player is able to complete a hexagon of six tiles, they place one of their tokens in the center of the six tiles. This indicates that the player completed a hexagon which means that they will score points at the end of the game. 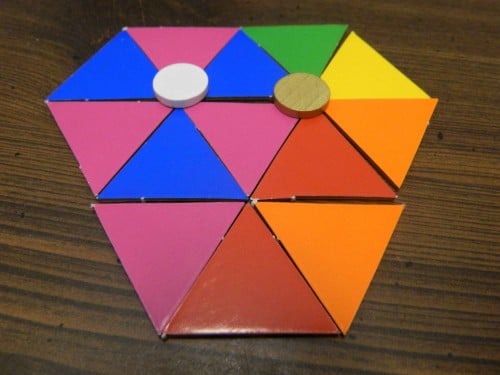 The current player has completed the hexagon at the bottom. They would place one of their markers to indicate that they were the player that completed it.

The game ends in two different situations. If one player is able to place all twelve of their scoring tokens on the gameboard, the game ends immediately. The game otherwise ends when all of the tiles have been played. Once the game ends, each player’s score is calculated.

Here are some of the additional rules that you can use in Vizia.

Group Bonus: Players score bonus points equal to their largest group of connected tokens. If a player has five tokens that are connected, the player scores five bonus points.

Purchase: Players can purchase a tile that is only connected to the other tiles on one edge and move it to any other place on the gameboard. The cost to purchase a tile is to remove one of your tokens from a hexagon that you completed. The hexagon that the token is removed from will score points for no players at the end of the game.

Team Play: If players play in teams, the teams sit opposite one another. Players score points individually and then the team’s scores are added together.

Vizia is an interesting idea for a game.  While Vizia plays like a lot of tile placement games, it is an interesting idea that is pretty well designed. It plays a lot like Qwirkle, Iota, and Froop. While it might not look like it uses a lot of strategy, there is a lot more strategy to the game than you would expect. There is a lot to think about in every given turn and if you make the wrong decisions you will hurt your chances in the game.

Vizia really works on your perception skills. While the game is pretty simple with easy rules that take just minutes to learn, Vizia is not the type of game that I would call easy. To do well in the game you really need to concentrate and figure out what you can do during your turn. It is harder than you would think trying to figure out what tiles you can play at a given time. If your perception skills need work, you could have some trouble with Vizia. Unless you are a master of the color wheel you will need to keep the instructions/box handy for a constant reference to the color wheel.

As the gameboard grows, the possibilities grow as well. Analysis paralysis can become a real problem with Vizia. You can spend a lot of time each turn if you want to analyze every single different option looking for your best option. Vizia will take forever if you allow players to have as much time as they want to make a decision. Its too bad that you can’t really even plan out your next move since one move by another player can easily mess up any strategy you would come up with. Unless you are playing with noncompetitive people, expect to spend a lot of time waiting while other players figure out what they are going to do on their turn.

While the game has a decent amount of strategy/decisions to make, luck still plays a big role in the game. What tiles you draw and the tiles available in the general pool will determine how successful you will be in the game. If none of the players miss easy scoring opportunities, the luckiest player will likely win the game. Luck is so important in the game because to win the game you usually need to get a couple of the two and three point scores. Outside of having bad luck, you should be able to score at least one point each turn. The only way to get ahead of the other players though is to create the more valuable layouts to score two and three points. The only way to score those layouts is to draw a good distribution of colors. If you somehow get five different colors between your own tiles and the community tiles, you are guaranteed to get a three point score. If you have little variety in colors open to you though, there is a chance you might not even be able to score in a given round. No matter how good you are at the game, if you don’t get the right tiles you can’t win.

I don’t know what to think of the length of the game. The game will usually play in around 30-40 minutes which seems about right. If the game would go much longer it would start to drag. The problem with the length is it just seems like not enough happens in any given game. It just feels like there aren’t enough tiles included with the game. The game feels like it just ends abruptly. I kind of wish the game included more tiles which would have allowed players to make more moves in the game. This would make the analysis paralysis problem worse though.

One of the biggest complaints with the game is the fact that the component quality is not good. The tiles feel kind of cheap since they are only made of thicker cardboard. The game could have used better cardboard, plastic or wood which would have made the tiles feel more durable. The wood player tokens aren’t bad but the paint seems to chip off pretty easily. Being from a small publisher like MJ Games this is somewhat to be expected but the components still could have been better.

Overall Vizia is a very solid game. The game makes you really think at times and has enough strategy/decisions to make that it feels like your decisions actually impact the game. The game is fun and is an interesting twist on the tile placement genre. The biggest problems with the game are that it relies a little too much on luck and it can have a serious analysis paralysis problem if players take too long to make their decisions.

If you would like to purchase Vizia, you can purchase it on Amazon. Vizia

Lanterns: The Harvest Festival Board Game Review and Rules