To score the most points by collecting the most valuable set of goal cards.

Each player selects a set of 25 influence cards of the same color. Each player shuffles their cards and draws the top three cards for their hand. The rest of the cards form the draw pile.

Shuffle the 36 goal cards and create stacks of six cards for each player. For example if there are four players create four stacks of six goal cards. All of the goal cards that aren’t used are returned to the box since they won’t be used in the game.

The players choose by any method who will be the first player.

Ruse and Bruise is played in six rounds. To begin each round turn the top card from each stack of goal cards face up.

For each player’s turn they play one of their cards face down below one of the goal cards. If there is a face down card above the card that was just played, that card is flipped over. If this card has a special ability it is either applied immediately or is applied at the end of the round (see Special Abilities section). The player then draws a card from their draw pile. If the player runs out of cards in their draw pile, they shuffle their discard pile and draw a card from the new draw pile. Play then passes to the next player. 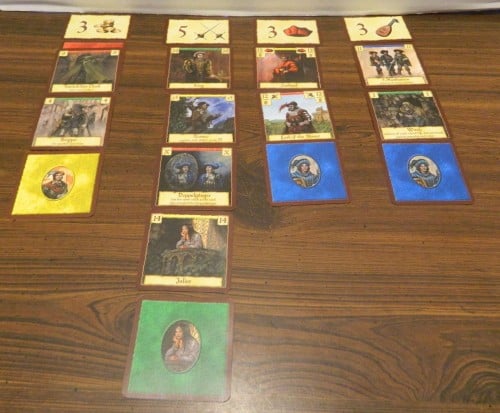 When a new card is played to a column, the card that was face down in that column is flipped over.

Play continues like this until the end of the round. The round ends when each goal card has at least as many cards underneath it as the value of the card. For example if the goal card is worth three points, at least three cards must be placed under it. Players can play additional cards underneath a goal card though. A round ends immediately once enough cards have been played underneath each goal card. All face down cards are flipped over but if the card had an immediate special action, that action is nor performed.

Before scoring is completed, all special abilities that aren’t immediate are performed. Each column is then scored separately. Each card played is worth the number of points printed on the card plus or minus any special abilities. If a player played multiple cards in a column, their points are added together. Whichever player has the most points in the column collects the goal card. If two players tie, the tied player who has the card closest to the goal card breaks the tie. 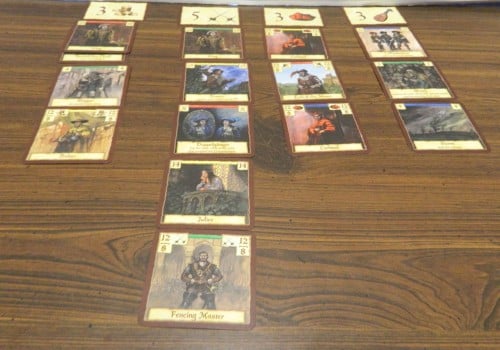 The round has ended so the goal cards are handed out. In the far left the red player has the highest total so they take the 3 coin card. The green player would take the 5 swords card because they have 32 in the row while yellow has 29 and red has 14. The yellow player takes the third column because while they tie the blue player at twelve points, their card is closer to the top. Finally the blue player will take the final column.

After all of the goal cards for the round have been distributed, everyone discards the cards that they played during the round. The top card from each goal pile is turned over and the next round begins.

The game ends when the sixth round ends and all of the goal cards have been given out. Players then tally up their scores. Players can score in two different ways.

The player who earns the most points wins the game.

Multi-Point Value Cards (Alchemist, Fencing Master, Lord of the Manor, Trader, Cardinal, Minnesinger): These cards have two different point values (8 and 12 points). The card is worth 12 points if it is played under a goal card with the same symbol as the symbol printed on the card. If the cards is played under a goal card that doesn’t match the symbol on the card, it is worth 8 points.

Cards Whose Ability Is Applied Immediately

Assassin: When the assassin card is flipped over, it immediately discards the card played after it. After the assassin’s ability is used once, the ability affects no other cards played below it.

Cards Whose Ability Is Applied After the Round Finishes

Musketeers: This ability must be applied first. When this card is flipped over, all special abilities from cards in the column that the card was played in are no longer applied.

Wizard: The Wizard’s ability is applied after the Musketeers. All cards valued 10 or higher are removed from the column. The Wizard affects cards that are boosted over 10, Doppelgangers, and cards underneath invisibility cloaks. If two wizards are played in the same column, they neutralize one another and the wizard’s ability no longer affects the column.

Witch: The Witch’s ability is applied after the Wizards. All cards valued 9 or lower are removed from the column (except for the witch card itself). This also affects Doppelgangers and cards placed under invisibility cloaks with values less than 9. If two witches are played in the same column they cancel out one another and their effect is not applied.

Hermit: The card loses one point for every other card in the same column as the Hermit.

Small Giant: The Small Giant increases in value by three for every additional card played in the column.

Dragon: The Dragon reduces the value of every card played by the other players in a given column by two points. A value of a card cannot be lowered below zero.

Ruse and Bruise is a really interesting game. It plays a lot like a filler game. The rules are pretty simple when you don’t factor in the special abilities on the cards. The game plays pretty quickly at around 30-40 minutes. Ruse and Bruise is a lot deeper than your typical filler game though due to all of the special abilities of the cards. Your decisions will matter in the game and you need to have a good strategy in order to win the game.

The thing I like most about Ruse and Bruise is the different abilities of all the different cards. The special abilities are pretty unique with each card having specific situations where it is really powerful. What is interesting about Ruse and Bruise is that all of the players use the same cards so no player will end up getting to use cards that the other players aren’t able to. When you get the cards and how you play them will likely determine who will win the game. Since every player has the same cards, players with good memories can figure out what cards a player hasn’t used yet to determine what cards they may play in a future round.

With each card having its’ own special abilities, it takes a while to adjust to your first game of Ruse and Bruise. The first couple of rounds of the game can move a little on the slow side as everyone is trying to figure out what they are supposed to do in the game. As you get more familiar with the game though it starts to pick up. Once the players are familiar with the cards, Ruse and Bruise can move quite quickly.

Ruse and Bruise really shines when you come up with clever ways to use some of the cards throughout the game. For example in one game it was the last round and three players needed one of the symbols in order to complete the set of six symbols to score the bonus points. While two players went after that symbol, I focused on a different column as I was setting up a strategy to steal the necessary symbol. I was able to set it up where I used the traitor card to move the goal card with the symbol everyone needed to the column I controlled which at the same time ended the round so no one could steal it back. There are plenty of situations like this where you can use some of the special abilities in clever ways.

Ruse and Bruise has quite a bit of strategy since you need to make decisions about what cards to play as well as which goals you want to go after. Which goal cards you go after in the game is really important. While you could technically win the game without getting a goal card from all six groups, I think it will be really hard to win if at least one of the other players gets all six symbols. The bonus of doubling your score is huge in the game. This means that players are going to try and collect all six symbols. Players need to pick and choose which goal cards they are going to go after though since you can’t win every card. There might be a card you want in a given round but you might want to consider giving up on it if too many other players are fighting for it since you would be better off going after some of the other cards.

My biggest problem with the game is that the order in which you draw your cards will have a big impact on how well you do in the game. Luck has a role in who ultimately wins the game. Several cards rely on other cards being available in order to be valuable. For example the Romeo card is pretty pointless if you don’t get it at the same time as the Juliet card. The Squire card is also not very valuable without the Prince. While every player will likely have the ability to play all of their cards once, when you get each card is really important.

I really wish the game would give players larger hand sizes. This would have really helped with some of these issues. With only three cards in your hand, you really can’t waste room in your hand waiting for the other card from a pair to show up. I think the game would have benefited from a four or five card hand size because it would give players more flexibility of when they wanted to play a particular card.

The game’s component quality is really good for the most part. The card’s have great artwork and are designed really well. I question why the cards are square shaped though. I think the game would have benefited from having normal sized cards since it would have allowed more room to add text to explain some of the abilities better or just added larger text since some of the text on the cards is quite small. I also don’t know why the Explorer for some reason doesn’t explain its’ special ability on the card itself.

Ruse and Bruise is kind of a peculiar game. It plays a lot like a filler game but it actually has a lot more strategy than you would typically expect from a filler game. Ruse and Bruise is a fun game that gives you quite a few options/decisions to make with regards to the special abilities on the cards. My only real complaint with the game is that there is too much luck in the game. While all of the players get the same cards, when you draw particular cards can have a pretty big impact on how well you do in the game.

If you only like highly strategic games that have little to no luck involved, Ruse and Bruise is not going to be for you. If you like light to moderate strategy games though and are looking for a new filler game, Ruse and Bruise may be the game for you.