To be the first player to play the last card from their hand.

Shuffle all of the playing cards (not the instruction cards). Deal seven cards to each player. The top card from the deck is played on the table to start the Froop (play field). The rest of the cards form the draw pile. The dealer gets to go first.

On a player’s turn they get to play one card from their hand onto the Froop pile laid out on the table. In order to play a card to the Froop at least two of the symbols have to overlap matching symbols on the cards already played. A card cannot be played if it overlaps a non matching symbol. All cards must be played facing the same direction but cards can be rotated 180 degrees to match cards already played. 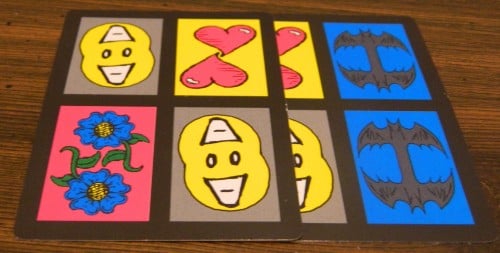 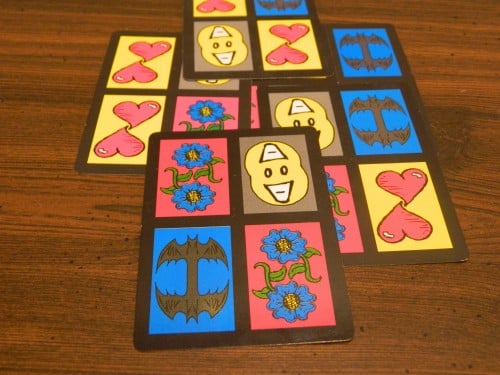 If you cannot play a card on your turn you must draw a card and your turn ends.

The first player to play their last card wins the game.

These rules can be added to the normal game in order to add more challenge or change things up.

Strategic: Every player has to play the game with their hand face-up so everyone else can see every card in their hand.

Froop! is a good example of not judging a game at first sight. Looking at the artwork on the box and the cards in particular you would think that Froop! was a terrible game. When I first saw the cards I was positive that the game was not going to be very good. Froop! might have some of the worst artwork I have ever seen in a card game. I am far from an artist but I actually think I could do as good of job as the artist did for Froop. It’s not like a lot of artwork needed to be drawn since there is only four different symbols included on the cards.

Adding to the poor artwork is the quality of the cards themselves. The cards appear to have been printed pretty cheaply. The cardstock is typical for a card game but for some reason the cards had a bunch of residue on them which felt like dust. This is strange since the copy I bought still had the cards sealed. I also hated that the instructions were printed on cards instead of using a sheet of paper. Using cards is especially bad for Froop! since the instructions are written in many languages which means that there are probably at least twenty instruction cards included with the game.

At this point you probably think that I hated the game. Before playing the game I thought I would hate it since it gives such a terrible first impression. After playing a couple hands I have to admit that I was a little surprised by the game. It is far from a masterpiece but it does some interesting things that make for an interesting card game.

Froop! plays a lot like Dominoes, Qwirkle and other similar games. The key to the game is trying to match symbols. While this concept seems a little overdone, Froop! mixes things up by having you play cards on top of each other so matching symbols overlap one another instead of playing them next to one another. While it is similar to those other games, this makes Froop! play quite a bit differently.

Two positives with the game is that it is easy and quick to play. The instructions fit on one and a half cards and take a couple minutes to read and explain to other players. While everyone is not going to be good at the game right away, players should know how to play the game almost immediately. As long as you can grasp that at least two symbols must match while playing a card and you can’t overlap non-matching symbols you pretty much understand the whole game. The game plays quickly with most hands taking around ten minutes.

One interesting mechanic in Froop is that the Froop pile continues to grow as players play cards. The game starts with it being really easy to see where you can play cards. The longer the game plays more options are added which gives you more chances for matches but also makes those matches harder to find. Player can use the expanding gameboard to their advantage by trying to set up a chain for their cards where each card can be played off one another. As long as the other players don’t mess up their plan, a player can set up several moves in a row.

The one problem with the expanding game board is that it becomes easier and easier to find a match which means that you will rarely ever have to draw cards due to not being able to play a card. This means that the winner of each hand will come down to who plays earlier and whose cards work better with the cards already on the table to form three and four symbol matches. The advantage of playing first is kind of offset by the fact that the first player will be unable to make a three/four symbol match on their first turn so they won’t be able to get a free turn while the other players could possibly get one on their first turn.

The most important thing in the game is to play cards that match three or four of the symbols on the board. The free turn you earn is crucial. Since players rarely ever have to draw new cards, whoever gets an advantage in cards played is likely to win the game. Most of your time/strategy has to go towards finding as many three and four match situations as possible. Generally you are probably going to want to focus on three symbol matches since in the games we played I believe we only had one four symbol match in all of the games. This means you should focus on the corners of the game board where two cards intersect creating an area with only three symbols showing.

With all of these different possibilities of where to play cards, some players might suffer from analysis paralysis. As the board continues to grow in size, players that like to analyze every possible move to find the best option could become frustrating. Each card that is added to the table grows the possible moves which could make the game drag on if one player feels like they need to analyze every possible move. While I don’t think the “Speed” rule gives players enough time, I think you should consider using something similar if one or more of your players need to analyze everything before making a move.

I have two tips that could help people who have trouble matching the cards from their hand with the cards on the table. First if you find a match with a card in your hand and a card on the table I would turn the card to the direction that you plan on playing it to help you remember where you were planning on playing it. Second I would try to group cards in your hand together so you can build a chain. While your chain may get ruined by other player’s moves, sorting your cards in this way makes it easier to find matches for cards in your hand.

Despite the game being better than I originally expected, Froop! still isn’t much more than an average game. It is a game that I might occasionally come back to and play a couple games but it will never be a game that I will be clamoring to play. Froop! acts as a good distraction but not much else.

Despite the poor artwork and subpar content quality, Froop! is not a bad game. It is a very solid but unspectacular card game. The game is easy to learn and quick to play. If you like symbol matching games like Dominoes and Qwirkle you might enjoy Froop!