Shuffle all of the cards and deal out four cards to each player face down. The rest of the cards form the draw pile. Take the top card from the draw pile and place it into the center of the play area. This card will be used as the starting card for the game. The “teeniest” player gets to start the game.

During a players’ turn they can either add cards to the play area or they can pass their turn.

This first move is allowed since all of cards differ in color, number, and shape.

All cards played also have to follow these additional rules:

Wild cards can take the place of any other card in the game. When played they give 0 points to the player who played the card. If on a future turn a player has a card that could replace a wild on the board, they may exchange their card for the wild card. 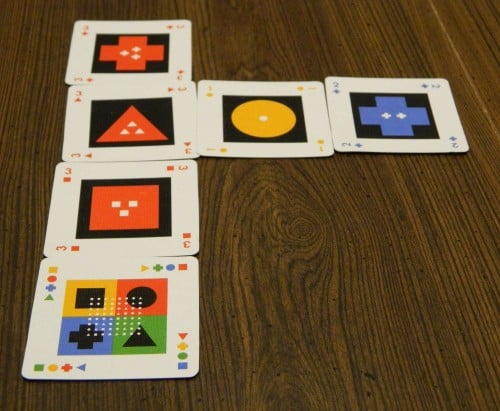 With this second play the player ends up playing three cards from their hand. The bottom wild card takes the place of a three red circle card. This line has all of the cards match colors and numbers while the shapes are all different. The player would score 18 points for this play ((3+3+3)*2).

After playing cards, the player draws enough cards in order to refill their hand to four cards. 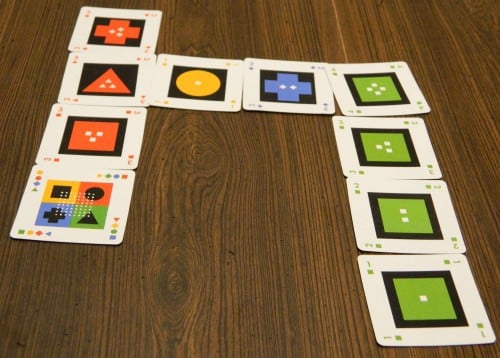 In this third play the player adds all four green cards on the right. The top green card can be played since it is a different number, color, and shape from the cards already on the board. The other three cards can be played since they match shape and color and their numbers differ. With this play the player would score 10 points for the left to right line, 10 points for the top to bottom green line, X2 points for completing the left to right line, X2 for completing the top to bottom line, and X2 for playing all four cards in their hand. The player would end up scoring 160 points (20*2*2*2).

When a player passes their turn they can choose to discard whichever cards they want from their hand and draw the same number of cards from the top of the draw pile. The discarded cards are added to the bottom of the draw pile.

Players score points for every line created and/or added to by the cards played. Each line is counted individually and cards that are used in multiple lines are counted in each line scored. Each card awards the player points equal to the number on the card. So a line with a two, three and four card would be worth nine points.

A game of Iota ends when all of the cards have been drawn and a player plays their last card. That players’ score for their last turn is doubled. Everyone’s score is tallied and whoever has the most points wins the game.

For those of you who have played either Qwirkle or Set, the how to play section probably sounded quite familiar. It should since Iota borrows significantly from both games. Iota takes elements from both games, adds them together to try and create a new game. From Qwirkle, Iota takes the “Domino” gameplay where cards are played in lines where elements on the cards have to either match or differ from one another. From Set, Iota takes the three element of color, shape and number. It also takes the idea of being able to create sets where the cards either all match or differ on the three different elements.

Since I like both Qwirkle and Set I was excited to give Iota a chance. While still an average to an above average game, Iota doesn’t really improve on Set or Qwirkle. I had fun playing the game and I plan on keeping the game. I was just disappointed that more couldn’t have been done when combining the two games

By combining the two games, the creator ended up actually creating a more difficult game than both games individually. The game is harder than both games individually because there is so much to look at before being able to play any cards. There will be many times that you think you have your play lined up just to notice that one of the three elements are preventing you from playing.

A Big Game In A Little Package

When you first see the tin for Iota you will probably be shocked by how small it actually is. The game even brags about its’ size by calling the game “the great big game in the teeny-weeny tin”. The teeny-weeny part is far from an exaggeration since the tin is actually only a couple inches tall. Space conscious board gamers will love this game since it will take up very little space on your shelf. You actually might have a bigger problem losing the game due to its’ small size. 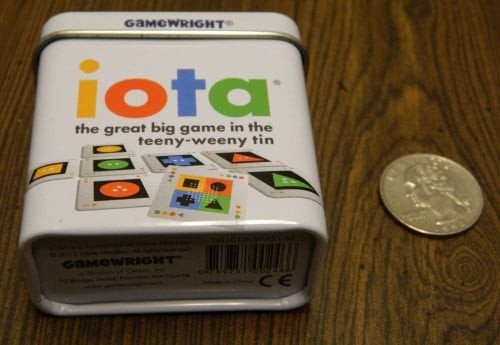 Here is an example showing how small the tin for Iota truly is.

Once you take the game out of the tin it is far from a tiny game. In order to play Iota you actually need quite a bit of space. If you play the game on a small surface you will quickly run into problems with space since while each card is pretty small by itself, the space required to lay out all of the cards expands quickly. By the end of the game, you will fill up most of a large table. While the tin is very portable, the space required to play the game hurts the game’s potential as a travel game.

For those of you not familiar with “analysis paralysis”, the term is generally used to refer to situations where certain players will take forever to make a move since they have to look through every possible move in order to find the best possible move. If you have one of these type of players in your group, you could be in a lot of trouble with Iota.

Iota is one of those games that could take forever if you want to find the best move every turn. Early in the game its not a huge issue since there aren’t that many places where you can play cards. Turns can still take quite a while when players analyze their cards to make sure all the requirements are meant. Turns take considerably longer than Qwirkle because there is a lot more that you need to check before playing tiles than you have to in Qwirkle. As more cards are played there are more potential areas to play cards so each turn takes longer and longer to complete. In the later game, thinking through all of the possible options becomes unbearable since there are way too many potential options for locations to play cards from your hand.

This was my biggest problem with Iota. At times the game can be kind of overwhelming if you try to go through all of the possible plays on every turn. You will spend forever going through all of the different combinations which will suck pretty much all of the fun out of the game. While some people may not have a problem with this, this was an issue for me. To enjoy the game I think a time limit needs to be established and all players need to acknowledge that they will not find the best move every turn. If you play the game casually where it is not that important who ends up winning, I think you will get a lot more enjoyment out of the game.

One Is Such A Lonely Number

After the analysis paralysis, the second biggest problem with Iota is that there are just too many scenarios where you are only able to play one of your cards. While this just could have just been a case of bad luck, I think it is a problem with the game mechanics. Since there are so many restrictions on what cards can be played in a line, it makes it hard to be able to play multiple cards from your hand on the same turn. At times it is hard to even find a match for one of your cards.

I didn’t like that some cards are worth more than others. In Qwirkle every tile played is worth the same amount of points. In Iota each card is worth a different value (1-4) which in my opinion is kind of unfair. For example why should a four card be worth four times as much as an one card. The four card is no harder to place than a one card so I don’t know why it should be worth so much more. This point disparity just adds more luck into the game since a player that draws higher valued cards has an advantage over players that draw low value cards. A player could play three one cards and score less points than a player that plays only one four card. That doesn’t seem to be very fair in my opinion.

The scoring system also seems to have an issue with creating a runaway winner. Due to the doubling rules a player could end up scoring a ton of points in one round which would put them in such a huge lead that no other player could even dream of catching up. Since the doubling compounds, a player could actually score over 200 points in one round. It would take a player many rounds to even come close to scoring that many points. Without having an equally high scoring round, the other players will never be able to catch up.

Iota is an interesting idea. The creator tried to combine the two successful games of Set and Qwirkle. While I had fun playing it, Iota doesn’t really improve on either game. At times it is hard to find places where you can actually play a card and there is a serious analysis paralysis problem in the game.

If you have played Qwirkle or Set and didn’t like one or both of them, you are not going to like Iota. If you love both games individually, you may like Iota. Iota is actually more challenging than both. If you are looking for a more challenging Set and Qwirkle I think you will like Iota quite a bit. If you only like (not love) Set and Qwirkle you are probably better off just sticking with those games since I think both are individually better than Iota. 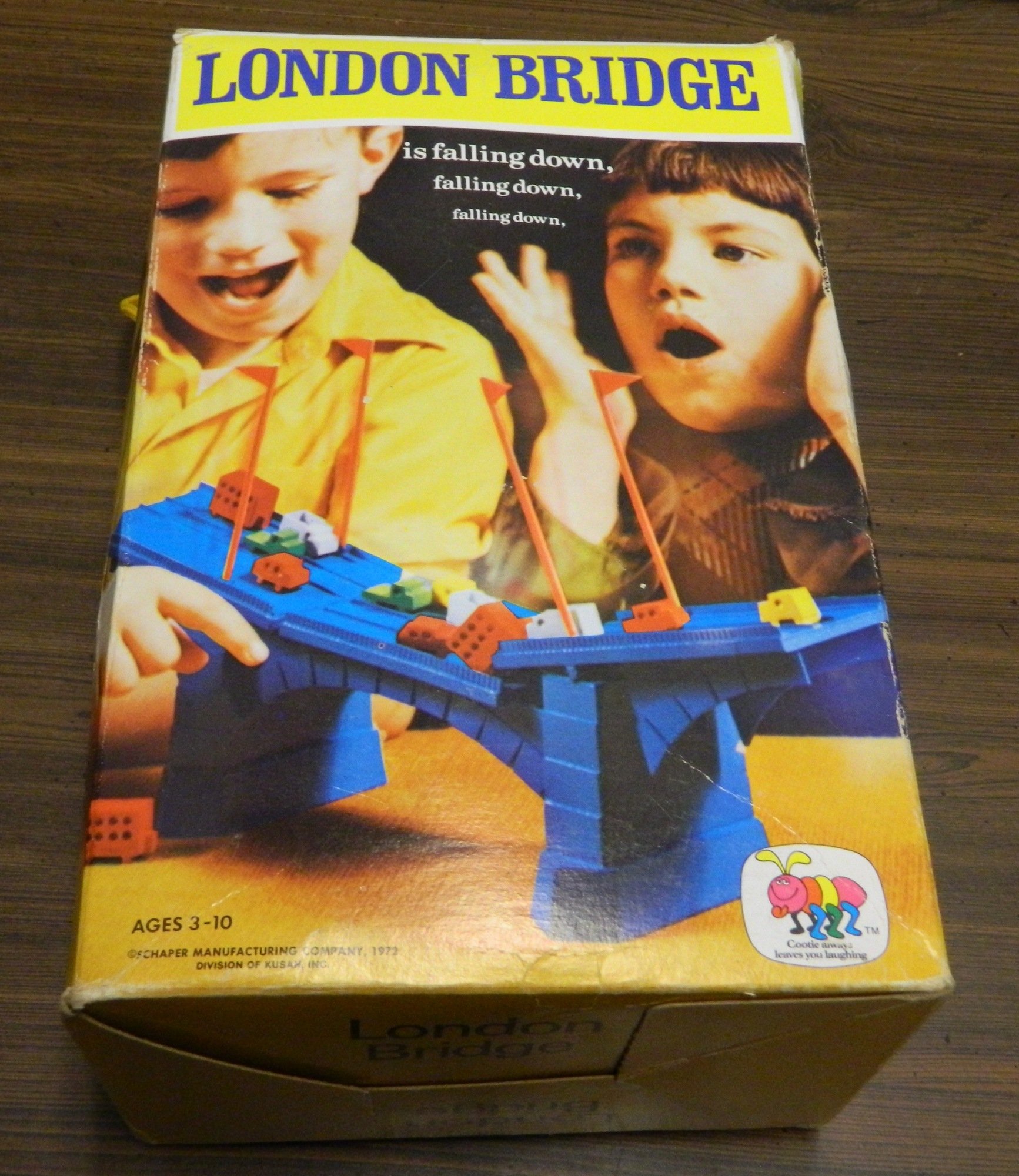 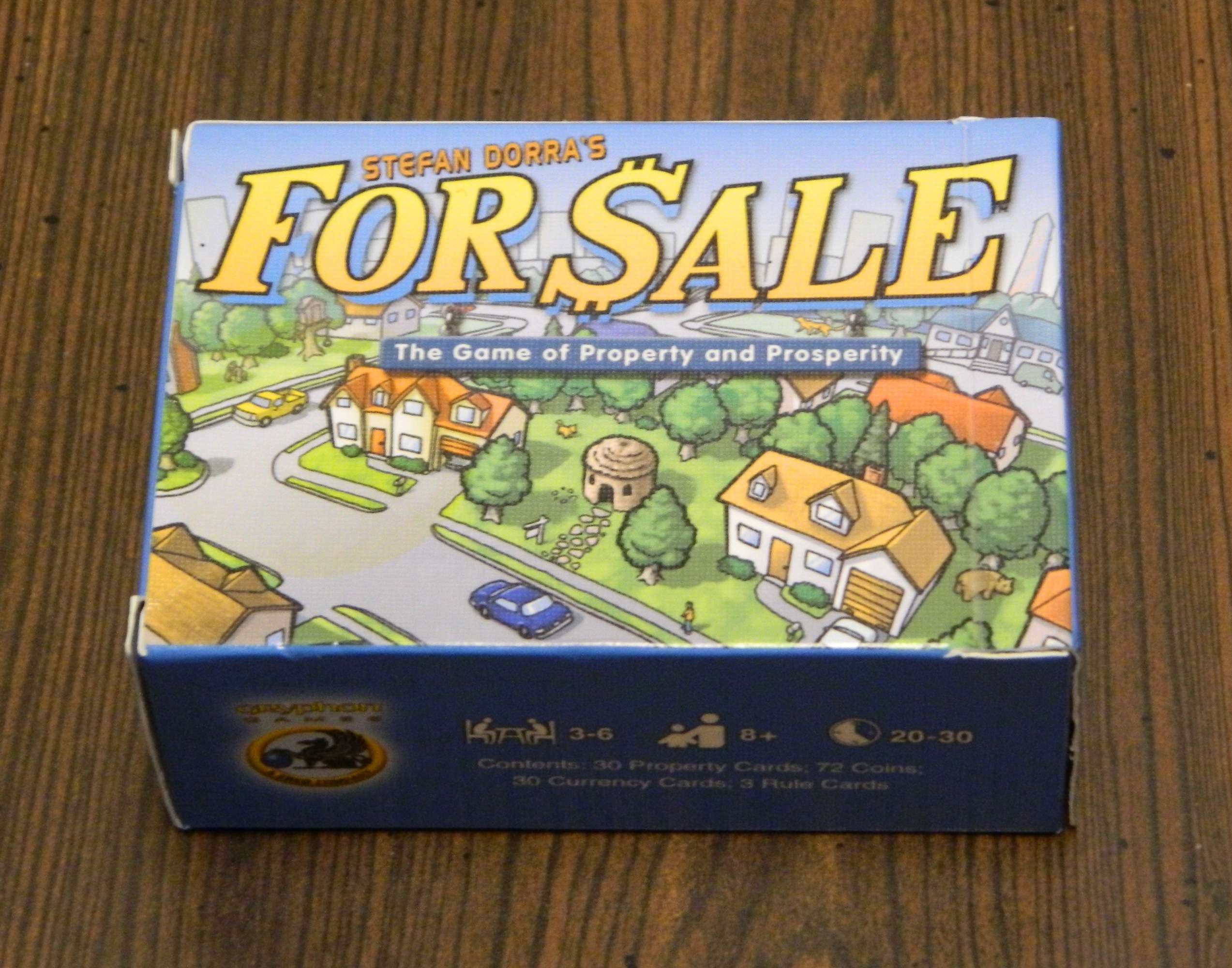 […] time with the rules at first, but Mollie is an expert Googler, and found help. I am pretty sure this is the site she found with great instructions. We also used a spreadsheet on the computer for keeping […]