Whether you love it or hate it, UNO has been a very popular card game ever since it was released in 1971. Because of it’s popularity it is not surprising that there have been a lot of spin off games in the UNO franchise. At this point there have probably been close to 20 different unique UNO games created including UNO Dominoes, UNO Hearts, and UNO Wild Tiles. Today I am looking at UNO Flip which takes the normal UNO mechanics and adds a flipping mechanic. The flipping mechanic in UNO Flip had potential but the game ends up being another very generic UNO game.

Note: This review is of the 2009 version of UNO Flip. If you are interested in the 2019 game UNO Flip! you can find that review here.

How to Play UNO Flip 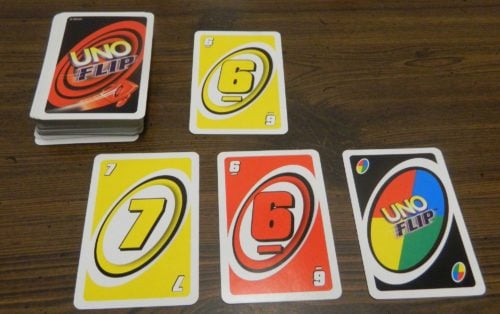 The top card on the discard pile is a yellow six. The next player can play any yellow card, any six card, or a wild/wild draw four.

Other than the number cards the game includes some special cards. 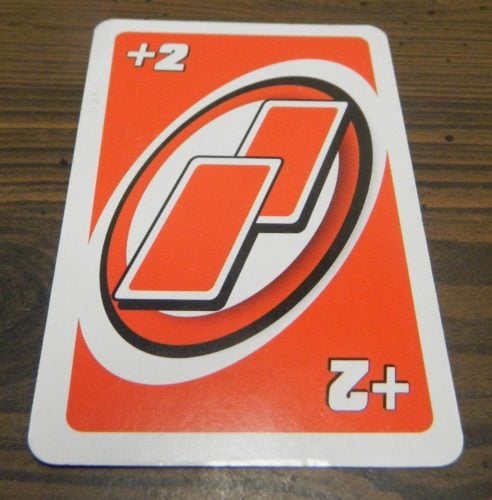 Draw Two: The next player will draw two cards and they will lose their turn. 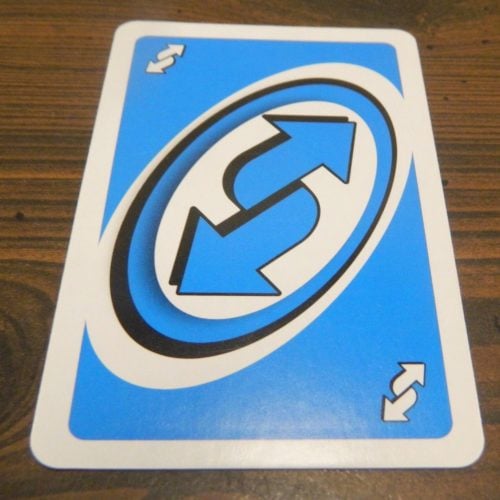 Reverse: The direction of play will reverse to the opposite direction. For example if play was moving clockwise it will now move counter clockwise. 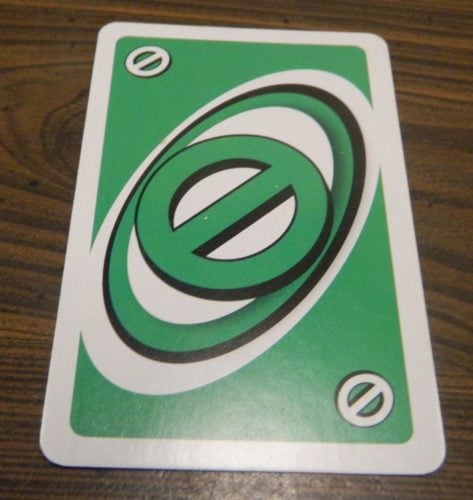 Skip: The next player will lose their turn. 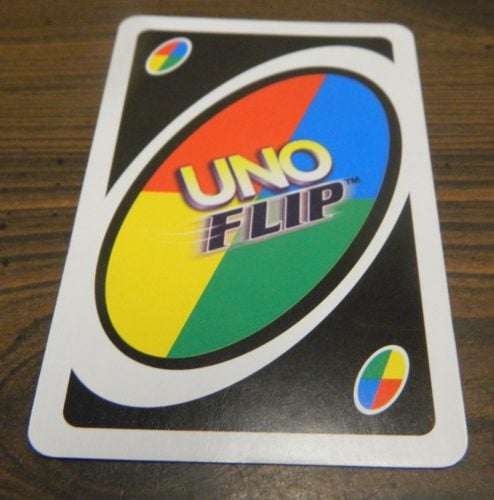 Wild: The player who plays the card gets to decide the color for the discard pile. 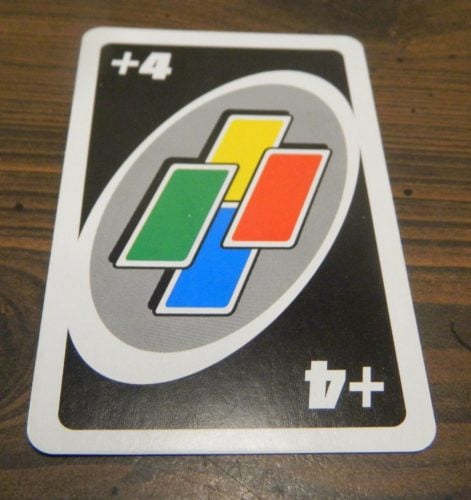 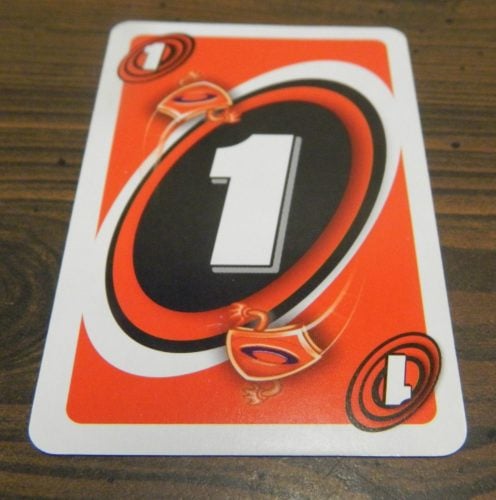 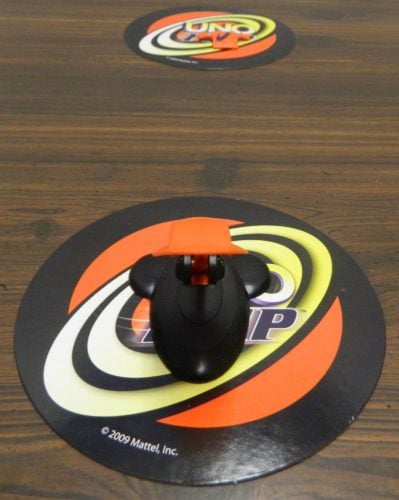 This player has successfully landed an UNO guy on another player’s crash pad. They will be able to give one of their cards to the player that controls the crash pad that their UNO guy landed on.

If a player is unable to play a card or doesn’t want to, they will draw one card from the draw pile. If the player draws a card that they can play, they can play it immediately.

Once a player has either played a card or drew a card, play passes to the next player.

When a player only has one card remaining, they must say UNO. If they don’t and someone else calls them out, they will have to draw two cards. When a player gets rid of their last card the round ends. The player that went out will score points for all of the cards left in the other players’ hands. The cards are worth the following number of points:

After scoring a new round is played (if none of the players have scored enough points to win) with the next player clockwise starting the round.

My Thoughts on UNO Flip

Before playing UNO Flip I was well aware that the game wasn’t going to be drastically different than basic UNO. I felt like it was going to be a normal game of UNO with the flipping mechanic added in to mix things up. While it didn’t seem like it was going to be that unique, I was intrigued by the flipping mechanic because I have always liked dexterity games with this type of mechanic. After playing UNO Flip I unfortunately have to say that the game is significantly more UNO than flip.

If I had to break down UNO Flip I would say that 90-95% of the game is UNO with the flipping mechanic occasionally coming into play. Based on how much of the game it entails I should spend most of this review talking about UNO. Pretty much everyone has played UNO at least once in their lives though so you probably already have your own opinion of the game. In general I would say that UNO is a solid but unspectacular card game. I like that the game is quick, easy to learn and is a game that you don’t have to put a lot of thought into. On the downside though the game relies almost entirely on luck and can get a little repetitive.

With basic UNO out of the way lets address the one unique thing in UNO Flip, the flipping mechanic. Before playing the game I had high hopes for the launching mechanic since I generally like these type of mechanics. While I knew the mechanic wouldn’t add a lot to UNO, I thought it would work well as a short distraction from playing cards to the table. I actually think the mechanic could have improved UNO except for two things that prevent that from happening.

The first problem with the flipping mechanic is that it feels like an afterthought in the game. The mechanic doesn’t come into play that often and when it does it doesn’t drastically change the game. As I said before I would estimate that only 5-10% of the game involves the use of the flipping mechanic. The only time it comes into play is when a player plays a card with the UNO guy on it or when a wild draw four card is played and you are using the alternate rule. Even when the flipping mechanic comes into play it doesn’t usually make that big of difference in the game. Unless it is one of the player’s last cards, being able to get rid of one card doesn’t make that big of difference in the game. You will occasionally win a hand by getting rid of your last card but more often than not you will just shift one of your cards to another player.

The bigger problem with the flipping mechanic is that it just doesn’t work that well. The problem is that it is hard to flip the UNO guy more than a couple inches because they tend to fly straight into the air and then fall down. Unless everyone sits right next to one another it will be hard to launch the UNO guy far enough to reach another player’s pad. Thus the mechanic rarely works which means it has an even smaller impact on the game. I am guessing the flipper doesn’t really work for a couple reasons. First the flipper feels kind of cheap so it just doesn’t work that well. It also doesn’t help that the UNO guys aren’t very aerodynamic.

Other than the flipper not working that well I would say the components are decent but far from special. While they don’t fly well, I have to admit that I kind of liked the UNO guys. They are pretty durable and just look kinda cool. The crash pads are just basic cardboard pieces. Finally the cards are basically typical UNO cards. You get the same number of cards as a normal version of UNO and the cards basically look the same except for the cards that feature the UNO guy.

Should You Buy UNO Flip?

When you get down to it there isn’t a lot to UNO Flip. Around 90% of the game is exactly the same as normal UNO. Play cards that match the color, symbol or number that is on top of the discard pile. The only unique mechanic in the game is the flipping mechanic. I had a lot of hope for the flipping mechanic as I generally like these type of mechanics. Unfortunately the mechanic doesn’t really work for UNO Flip. First the mechanic rarely comes into play and when it does giving away only one of your cards doesn’t drastically change the game. The bigger problem is that it just doesn’t work that well. Most of the time the flipper can only shoot the UNO guy a couple inches so you will rarely be able to shoot your UNO guy far enough to land on another player’s crash pad.

So would I recommend UNO Flip? In most cases I would say no. If you don’t care for UNO, UNO Flip does nothing that will change your mind. If you like UNO I probably still wouldn’t recommend UNO Flip because the flipping mechanic doesn’t really add much to the game and mostly just distracts you from the normal flow of a game of UNO. I would only recommend picking up UNO Flip if you can find it for really cheap and love UNO.

If you would like to purchase UNO Flip you can find it online: Amazon

While I have never played the game after a brief look at the rules I personally would say that you probably wouldn't have to draw the two cards. In order for you to be forced to draw the penalty cards one of the other players has to call out that you missed saying "UNO". If you play the second card before anyone calls you out you shouldn't have to draw the penalty cards as they didn't call you out in time. There is also the rule that says you only have to draw the cards if another player calls you out before the next player starts their turn. As you will also have the next turn as soon as you start playing the second card your turn would have started and thus you would no longer be subject to the penalty.