In 1971 International Games created the game that they would become most famous for, UNO. Due to the success that they had with UNO, International Games and later Mattel tried to introduce as many UNO spinoffs as they could in order to take advantage of the popularity of UNO. UNO has ended up with a dice game, a dexterity game, an electronic game, a dominoes game, among many others. Today we are going to look at UNO Wild Tiles which asks what it would be like to take the card game and turn it into a tile laying game. Turning UNO into a tile laying game adds some interesting mechanics but adds just as many issues.

To begin the game place all of the tiles face down inside the bottom of the box. Each player draws one tile (if it is not a number tile they must draw another tile). The player who draws the highest number gets to play first. Each player then draws seven tiles and places them into their rack.

The first player will place one of their tiles onto the start space and point the arrow on the tile to the space that they would like the next player to play their tile. The arrow can be pointed towards any of the eight spaces surrounding the center space (including diagonals). 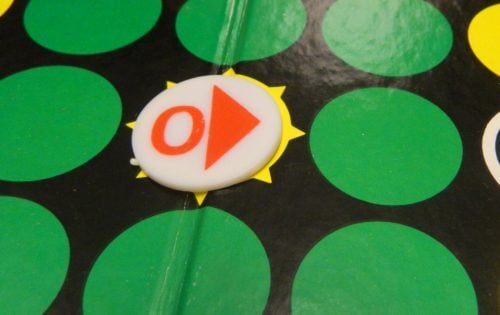 The first player has played the first tile into the center of the gameboard. The next player will have to play a tile to the space to the right of the first tile.

After the first tile is played all future tiles must be played in the space pointed to by the previously played tile. A tile can only be played if it matches one of the following: 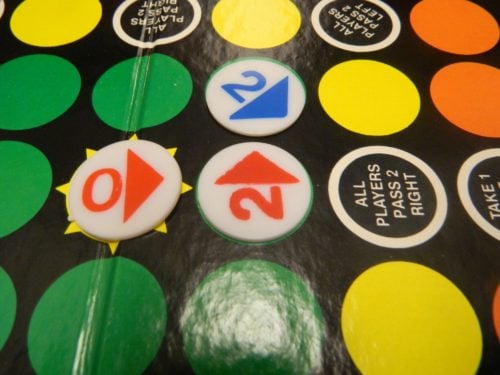 The second tile played matches the color of the first tile played. The third tile matched the number of the previous tile.

When a new tile is played the player must always choose the direction of the arrow pointing it to an unoccupied adjacent space.

If a player is ever unable to play a tile, they must draw a tile from the box. If the player already has fourteen tiles or there are no tiles remaining, no additional tile is drawn. If this tile can be played the player can choose to play it immediately or add it to their hand. The player’s turn then ends. A player can also willingly choose to pass on playing a tile (even if they have a tile they can play) and draw a new tile as long as:

Eventually a player may be forced into playing a tile onto a space where there are no adjacent unoccupied tiles to point the arrow on their tile towards. This player has played a tile into a dead end. This player still plays the tile but then is forced to draw five tiles. The next player gets to play on any unoccupied “Play Any Tile Here” space on the gameboard. If there are no unoccupied “Play Any Tile Here” spaces, the game ends immediately. 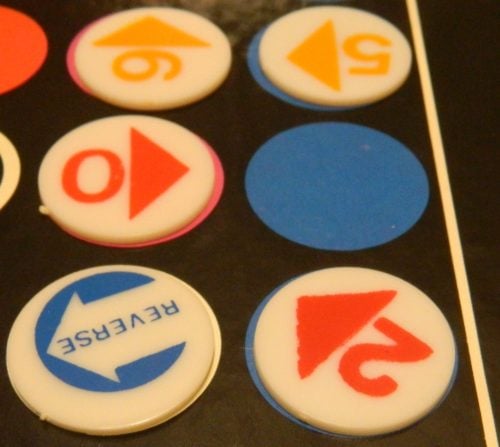 The next player to play a tile will be forced to play into a dead end since there are no unoccupied tiles to point their tile towards.

The special tiles in UNO Wild Tiles mostly follow the rules of the corresponding cards in UNO.

Draw Two: The next player must draw two tiles and they skip their next turn.

Reverse: The current direction of play is reversed. For example if play was currently moving clockwise it is now moving counter clockwise.

Skip: The next player has to skip their turn.

Wild: The player who plays the tile gets to choose the color of the next tile played.

Wild Draw Four: The player who plays the tile gets to choose the color of the next tile played. The next player has to draw four tiles and their next turn is skipped. A wild draw four can only be played if the player has no tiles that match the current color.

Tough Tile: This tile can only be played on spaces that say “Play Any Tile Here”. Otherwise the only way to get rid of the tile is to give it to another player. 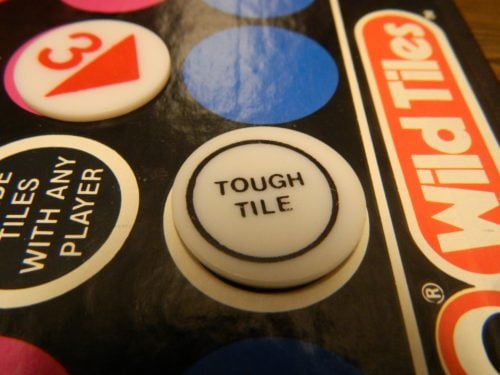 This player was able to get rid of their tough tile since they were able to play it on a “Play Any Tile” space.

The first player to get rid of all of their tiles wins the game/round. When a player is down to one tile they must say “Uno” before playing their second to last tile or any player can call them out and the player has to draw another tile. If players are playing multiple rounds the players tally up the amount of points of the tiles left in their hand which count as negative points for the player.

I have to say that I am a little conflicted about UNO Wild Tiles. There are things that I like about the game and there are other things that I don’t really care for. For the most part UNO Wild Tiles is UNO with tile laying mechanics. I would say around 80% of the game is the same as the original game with cards being replaced with tiles. While there are a lot of people that hate UNO, I have to say that I have always found UNO to be a fun yet flawed game. With that said if you don’t like UNO it is very likely that you won’t like UNO Wild Tiles either.

So lets start with the things I like about UNO Wild Tiles. The thing I like most about the game is just the idea of using a gameboard. While there is not a lot to the gameboard mechanics, they add an interesting twist to your typical UNO game and actually add a little more strategy to the game. Most of the strategy comes from choosing where to force the next player to play their tile. This allows players to direct another player towards a harmful instruction space or can even trap them into a dead end.

This dead end mechanic is actually a really interesting idea since it adds the most strategy to the game of all of the new mechanics. It is surprisingly satisfying being able to trap another player into a dead end. This allows good tile play to make up for some of the luck elements of traditional UNO. I will admit that it is pretty hard to trap another player though.

The problem I had with UNO Wild Tiles though is that I didn’t particularly care for any of the other new mechanics. The first thing I didn’t like was the instruction spaces on the gameboard. I understand why they were added to the game but I feel like they just get in the way for the most part. The instruction spaces just feel like a wasted opportunity and just mess with a game that already relies heavily on luck. While some of the spaces don’t have a huge impact on the game, a lot of the spaces can have a drastic effect on the game. Some of these spaces can easily take you from first to last and vice versa. You could be one tile away from winning the game and then have to trade with a player that has ten tiles.

The other added rule that I don’t really like is the idea of the tough tiles. The idea of a tile you can only play on specified spaces is an interesting idea. The problem with the tough tile is that it is too hard to get rid of. In the game I played we played until a stalemate with all of the tiles being drawn. In the entire game only one player was able to play a tough tile to the board. The problem is that it is too hard to guide the path toward one of the “play any tile” spaces since they are all around the edges of the board. No player is going to let a player get to that space if they can prevent it. This creates a problem where the tough tiles essentially have to be passed between players since there is no other way to easily get rid of them.

What I was most surprised by with UNO Wild Tiles was that while the game shares a lot with the original game, the two games actually feel quite a bit different. What I like most about UNO is that the game is really quick and doesn’t require a lot of thought. It is the type of game that you can just play and relax because you don’t have to put a lot of thought into the game. While UNO Wild Tiles is quite simple, it doesn’t really feel as carefree as UNO. Also while UNO is a quick card game, UNO Wild Tiles kind of overstays its welcome. Unless a player gets lucky you can expect a game to last 20-30 minutes.

Finally I can’t say that I am a huge fan of the components. My copy, which I found at a thrift store, had some issues with the tiles. The paint on the tiles seemed to fade off pretty easily and the chips are so thin that if you look close enough you can see through the back of a tile to see what is on the other side. I also am not a big fan of the tiles being circular. The gameboard is decent but is very bland.

The reason I am most conflicted about UNO Wild Tiles is that there are things I like about the game but there are a lot of things that feel like a waste. I like the idea behind the gameboard since it adds some strategy to UNO. While I would mostly play the original UNO, UNO Wild Tiles has a unique feel to it where I would consider playing it every so often. The problems come from the instruction spaces and the tough tiles. You really don’t have any control over either and they have too much impact on the game.

If you don’t like traditional UNO, I see no reason why you would like UNO Wild Tiles. If you like UNO I am not sure what you will think about UNO Wild Tiles. I liked some things about the game but I didn’t like other things. I personally don’t know yet whether I am going to keep my copy of the game. If you find UNO Wild Tiles for cheap (you can regularly find the game at thrift stores) and think the idea of UNO turned into a tile laying game sounds like a fun idea, UNO Wild Tiles may be worth checking out.