UNO Dominos follows most of the normal rules of Dominoes. Brushing up on the rules on how to play Dominoes may be helpful.

The game begins with each player drawing six dominoes randomly. Whichever player has the highest numbered tile where both numbers are the same (a doublet) gets to play that tile first. If no one has a numbered doublet, players continue to draw tiles until someone gets one and plays it. All future tiles are then played off that tile.

Once a player has only one domino remaining they must yell out “UNO”. If someone catches them before they say UNO, the player with only one tile must draw two additional tiles from the draw pile.

When one player plays their last domino, they win the current round. The player receives points based on the dominoes still held by the other players. Points are awarded as follows:

A new round is then played. When one player reaches the point total agreed to by all of the players, they win the game. 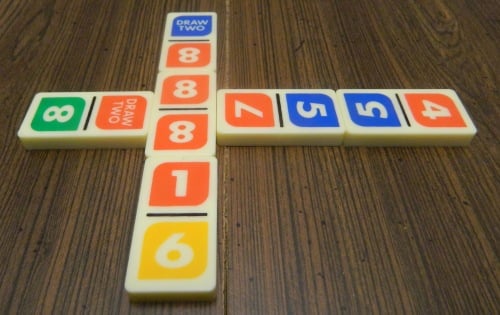 In 1971 International Games first introduced the game UNO. UNO became a hit and is still a hit toady. Due to its’ popularity, UNO has had many spin-offs over the years with UNO Dominos being one of them.

While UNO is far from a strategic game, I enjoy playing the game. The game is simple to learn and easy to play. It works well as a warm up game. Since I like UNO I have given quite a few of these UNO spin-off games a chance. Some are pretty good while others are not. After playing UNO Dominos, it unfortunately falls into the second category.

UNO Dominos is essentially UNO combined with the game of Dominoes (not surprising given the name of the game). I have actually never played Dominoes before but I was familiar with the concept of the game. In UNO Dominos you are essentially playing UNO with dominoes instead of cards while also following the placement rules of Dominoes. UNO Dominos is a little more difficult than normal UNO since you have to implement the Dominoes rules but it is still easy to pick up.

I had some fun playing UNO Dominos but the biggest problem with the game is that it is way too easy to place tiles. In the five rounds of the game that I played, not once did anyone have to draw a tile due to being unable to play any tiles. On every turn each player was able to play a tile. I actually had to check the rules several times to make sure I wasn’t missing something and I wasn’t. I can see having an available move on most turns, but having one on every turn is pretty ridiculous.

With it being way too easy to play all of your tiles, there is essentially no strategy/skill to the game. The winner of the game will be the player that gets the most turns. The way to get the most turns is to get lucky in your selection of tiles. In the original game of UNO, the special cards were always valuable since they gave you an advantage over the other players. In the original UNO, these advantages were lessened somewhat by the fact that every player would likely have to draw cards at some point. In UNO Dominos players essentially get to play a tile every turn so these special effects become even more powerful. All of the tiles that make a player skip a turn give players a turn advantage which is crucial to winning the game. Tiles that force players to draw additional tiles are even worse. These tiles give a player between a three and five turn advantage almost guaranteeing that the player they were played against won’t be able to catch up unless they are able to play a similar draw tile against the other player.

The ease of playing tiles doesn’t ruin the game but it does hurt the game a lot. The game is still somewhat fun to play but it kinda feels pointless at the same time since whoever gets the best tiles will always win. The original UNO had little strategy but I honestly think UNO Dominos has even less strategy. UNO Dominos is just not a good combination of UNO and Dominoes. I think you would honestly be better off either playing UNO or Dominoes separately. UNO Dominos could work as a warm up game where the outcome isn’t important but you could just as easily play a normal game of UNO.

UNO Dominos suffers trying to do too much. Combining UNO and Dominoes results in a game that is too easy. With tiles being too easy to place the game ends up relying almost exclusively on luck.

If you are a really big fan of UNO and Dominoes you may enjoy UNO Dominos. Otherwise you should probably skip the game altogether.

I purchased a uno dominos game but there was no instruction. I wish I had a picture of what the colour numbers are worth.

If I am understanding your question correctly, the numbers are worth their own value. For example a four is worth four points. Points are awarded to the player that is first to get rid of all of their tiles. They will score points for all of the tiles that the other players had left in their hand.