These rules are for the 1965 version of the game. From what I can tell the older versions of the game play the same but have different mileage cards more appropriate for the time period of the game.

Shuffle all of the cards and deal five to each player. In four and six player games players play in teams of two and must sit across from their partners. In three and six player games one Stop to Refuel, one Missed the Curve, one Burning Oil, one Broken Spring, and one Brake Adjustment card should be removed from the deck.

A player’s turn begins with a player drawing a card. That player then either has to play or discard one of their cards. Players can play cards in front of themselves if they meet the requirements or can play cards in front of the other players/teams. If the player can’t play any of their cards on their turn they have to discard one card from their hand. 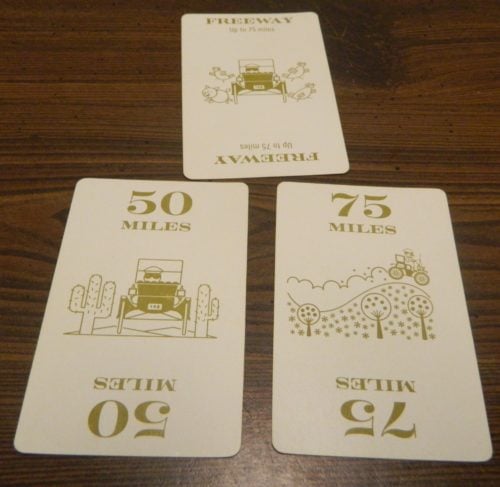 This player has played a freeway card. This player/team can now play 50 and 75 mile cards.

Players can play cards against other players/teams to hinder their journey. These cards can only be played against a player/team if they don’t already have one of the cards played against them and they have an exposed go card. 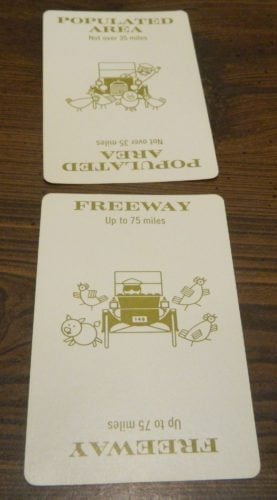 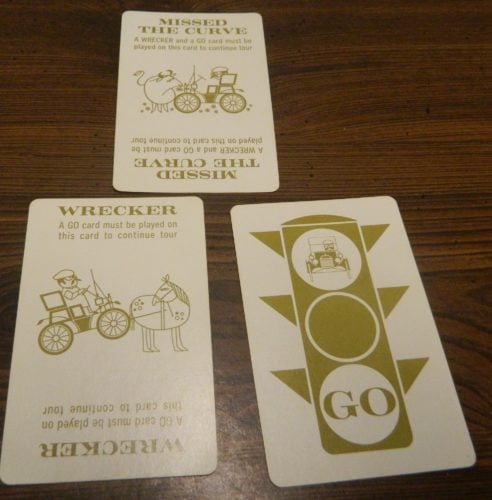 The Missed the Curve cards prevents the player/team that it was played against from playing any mileage cards until they play a wrecker and go card. 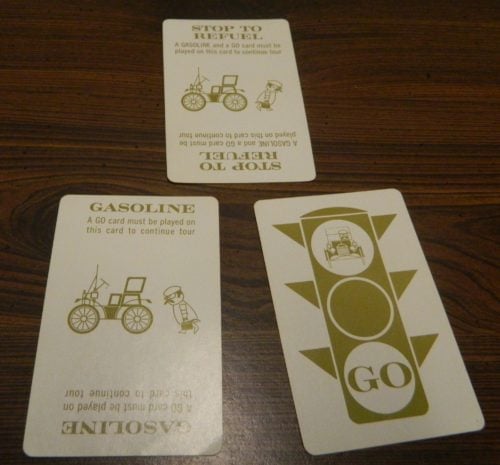 The Stop to Refuel card prevents the player/team that the card was played against from playing any mileage cards until they play a gasoline and a go card. 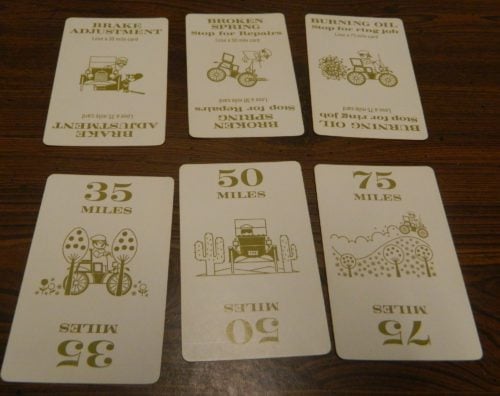 The burning oil, broken spring, and brake adjustment cards remove a mileage card indicated on the card from the player it was played against. These cards can only be played if the player/team it is played against currently has a go card exposed.

If at any time the draw pile runs out of cards, all cards from the discard pile and any Go, Freeway, Populated Area, Missed the Curve, and Stop to Refuel cards no longer in use are shuffled and form the new draw pile.

The game continues until one player or team reaches the 590 miles (two or four player games) or 295 miles (three or six player games). Players have to reach the total using the following cards: 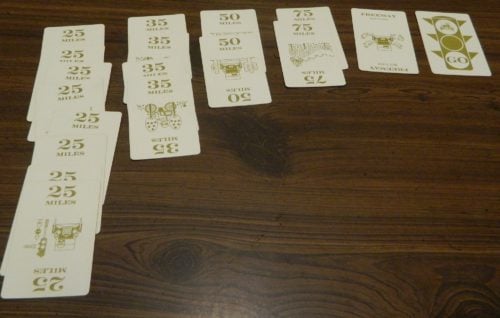 This player/team has played all of the cards needed to win the game.

Created back in 1906, Touring is probably one of the oldest card games that I have played. In Touring players go on a trip in their car and try to reach their destination before the other players. For a lot of people Touring might sound a lot like the game Mille Bornes. It is generally assumed that Mille Bornes is the updated version of Touring since it shares many of the same mechanics of Touring. Being such an old game I was worried that Touring may be a little outdated. While it was probably good for its time, Touring feels outdated today.

To illustrate the biggest problem with Touring I am going to tell you the story of my amazing journey in the game. To begin the game it took my partner and I quite a few turns just to get a single go card. When we finally got a go card we were immediately hit with a hazard card from the other team that they had kept for when we actually got a go card. It took us quite a few turns to get the cards to get rid of that hazard. We then got hit with another hazard. This continued for half to two thirds of the game. We actually went through the deck a full time before my partner and I were even able to play a single mileage card. All this time we had to keep discarding cards while the other team got to play quite a few mileage cards. After we finally got moving we started to make some progress but we were so far behind that there was no way we could have caught up.

As this story should have made abundantly clear, Touring has a serious problem with the hazard cards. There are way too many of them in the game and there are not nearly enough of the cards that are used to fix the hazards. This makes it quite easy to totally block a player/team from making any progress in the game. The other team struggled quite a bit with hazards as well. While my group probably spent around two thirds of the game dealing with hazards, the other group probably spent close to half of the game dealing with them. No game should have the players spending half or more of their time trying to recover from “gotcha cards” played by the other players.

Its shouldn’t come as a surprise that luck plays a big role in who ultimately ends up winning the game. If you don’t get the right cards at the right time you won’t win the game. This reliance on luck starts immediately with having to get a go card in order to do anything to help yourself in the game. Having to waste a bunch of turns waiting for a go card can be devastating since while the other players can play cards, you are forced to discard cards. Then you can get stuck with a hazard card which takes a long time to get rid of. Finally since you need specific mileage cards in order to win the game you could get stuck in a situation where you are just waiting to get a specific card in order to finish the game. I really don’t see anyone winning Touring without some luck on their side.

When you think about it there really is very little strategy to Touring. Basically you just draw cards and play/discard them. There really isn’t much strategy to how you play them either. The only real strategy I could think of was to play your 50 and 75 mile cards whenever you were able to since a player may take away your freeway card and if you have already played all your required 50 and 75 mile cards you wouldn’t have to play a new freeway card. Other than that it doesn’t really matter what order you play your cards in since you have to play specific cards to win the game with no flexibility on what mileage cards you can play. I personally thought this requirement to play specific cards was kind of stupid.

The two main decisions you make in the game is whether you want to play cards to help yourself or hurt the other players and what cards you will discard.

Since you can only play one card on your turn, you need to choose whether you are going to play a card to help yourself or hurt another player. Personally I think playing the card to hurt another player is better since the player has to waste at least one turn reversing the card you played. In most situations it is quite a few more turns. If you are way ahead though you may just want to play cards that help yourself in order to finish the game before the other players/teams catch up.

Which cards you decide to discard is probably the most important decision in the game since it could have a huge impact on how you deal with issues that arise on future turns. This is where the hand size limit becomes a problem since you have to decide between keeping cards to hurt other players, cards to help when others play hazards against you, or to keep mileage cards you need to win the game. What cards you end up keeping can have a huge impact on the game but since you have no idea what is going to happen next you are pretty much guessing what cards you should keep.

Even though it is not a good game, it is kind of hard to be too harsh on Touring when you factor in that the game was originally made in 1906. In 1906 it was probably one of the best games you could find since a lot of games from that era were just bland roll and move games. I find it quite interesting that the game apparently kept updating the mileage cards in order to keep up with the times. If you like old classic card games you may enjoy Touring.Even though the game is outdated it is still better than newer takes on the game such as XLR8.

While it was probably a good game for its time period, Touring really hasn’t stood up well over time. The game relies almost entirely on luck. There are way too many hazard cards in the game which brings the game to a standstill. The game has some interesting mechanics but has too many problems to be anything more than a curiosity due to its’ age.

If you hate luck or “take that” games you will hate Touring. Other than playing the game for curiosities sake I don’t think the game is worth picking up unless you have really fond memories of the game or really like older card games.

The art is MUCH better on the Touring cards vs. Mille Bornes. It is much easier to play with children as the cards are better illustrated.