To begin the game everyone takes a speed-o-meter and a times table card. During the game the players use their speed-o-meter in order to keep track of their current speed. The cards are shuffled and every player is dealt 5 cards.

If a caution, blow out or pit stop card is played, the player can also play a MPH card.

After playing a card(s), the player draws either one or two cards to get back to five cards total. Play continues until one player’s speed reaches 200 MPH or more. 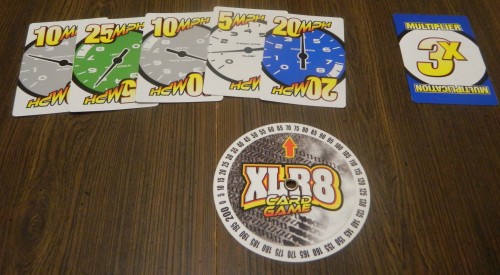 In the past several companies have taken a stab at creating a card based racing game which include games such as Touring and Mille Bornes. XLR8 is a recent entrant into the racing card game genre. Created in 2008 by the United States Playing Card Company, XLR8 tries to combine math skills with a fast paced racing game. Unfortunately XLR8 is a broken down junker of a card game.

The single biggest issue I had with the game was that is was just so boring. The game doesn’t do anything special and doesn’t really keep your attention. Essentially the game boils down to playing some cards to increase your speed. When someone’s total gets too high you play a card that will reset it to 0 or 25 MPH. Rinse and repeat. Eventually someone will get lucky and be able to play enough cards to be able to use a multiplication card to get their total over 200 MPH and win the game.

While playing the game it feels like you have no actual control over the game. You just play a card and draw a new card. There is really no strategy to the game since it is pretty obvious what cards you should play at any given time. If no one is currently at a high speed, just play speed cards to your own total. If one player is close to 100 MPH, play one of the cards to reduce their speed to 0 or 25 MPH since they likely will have a X2 card which means they will win if you let them get to 100 MPH. If you reach 100 MPH play the X2 card that you most likely have been saving. The whole game essentially boils down to this sequence until someone is lucky enough to be able to play one of their multiplication cards in order to get over 200 MPH.

In addition to being monotonous, the game is also quite frustrating. Whenever you make any progress, someone will reset your speed to either 0 or 25 MPH. This constant resetting means most of the game is totally pointless. I was one card away from reaching 100 MPH several times in the game. Since I had a X2 card in my hand from the initial deal of the cards, I would have won if the other players let me play the card. Every time I even got close to 100 though, I was reset to 0 or 25 MPH. The game just becomes a exercise on who is first to get lucky and get to 100 points with no other player having any cards to reset everyone’s speed.

The icing on the top of the issues with the special cards is the X3 card. If you get the X3 card you are pretty much guaranteed to win the game. Since players need to save their reset cards until players get close to 100, they are unlikely to reset the players when they get close to 70 MPH which is all that is needed to win with a X3. Even if someone resets the speeds, the player can just hold the X3 since they cannot lose the card unless they play it. Therefore the player just needs to wait out all of the players until they get their total above 70 MPH. The only way a player who gets the X3 could lose would be if either none of the players stop a player before they reach 100 MPH (and they have a X2) or if the player for some reason uses the X3 before they reach 70 MPH. Otherwise the player who gets the X3 is likely to win the game. Essentially the game boils down to whoever gets lucky enough to get the X3 card.

In addition to the problems with the gameplay, the game is so poorly produced that the game either misprinted the instructions or the cards themselves. The instructions have the pit stop cards making a player skip their turn while the blow outs are supposed to reset a player’s speed to 0 MPH. On the cards themselves the opposite is printed. This misprint doesn’t really affect the game since there is the same number of each type of card. You can just play the game with the text that is printed on the cards. A mistake like this truly shows how little care really went into the game though.

The rest of the components are not much better. Other than the printing errors, the cards are not terrible. They are made of pretty good card stock and should last if taken care of. The artwork is nothing special though. The speed-o-meters work pretty well even though sometimes they are pretty hard to turn. I found the packaging to be pretty stupid. The packaging seriously looks like a bag of snacks. I am so glad that this trend in card game packaging appears to not have taken off.

As you can probably tell, XLR8 is not a good game. When I think of XLR8 I can find only two positives.

The biggest positive is that the game could be used as an educational opportunity. The main concept of the game revolves around teaching children addition and multiplication. I can actually see the game helping younger children with their counting skills of numbers in multiples of five. For older children the game gives a decent lesson in multiplication (X2 and X3). The game has a recommendation of 7+ and that seems about right if parents want to have a game to help their children’s addition skills.

The other positive is that the game is dirt cheap. When this review was written the game was only a couple dollars new with shipping included. Purchasing XLR8 will not break the bank.

XLR8 is not a good game. It is actually probably one of the worst games I have played. The game is broken with overpowered special cards. The game is monotonous with the constant resetting of everyone’s total. Your success in the game relies entirely on luck. The game is just boring to play.

The only reason I see to play this game is to help children with their addition and multiplication skills. I think the game could actually do a decent job of that. Otherwise I could not recommend this game to anyone.