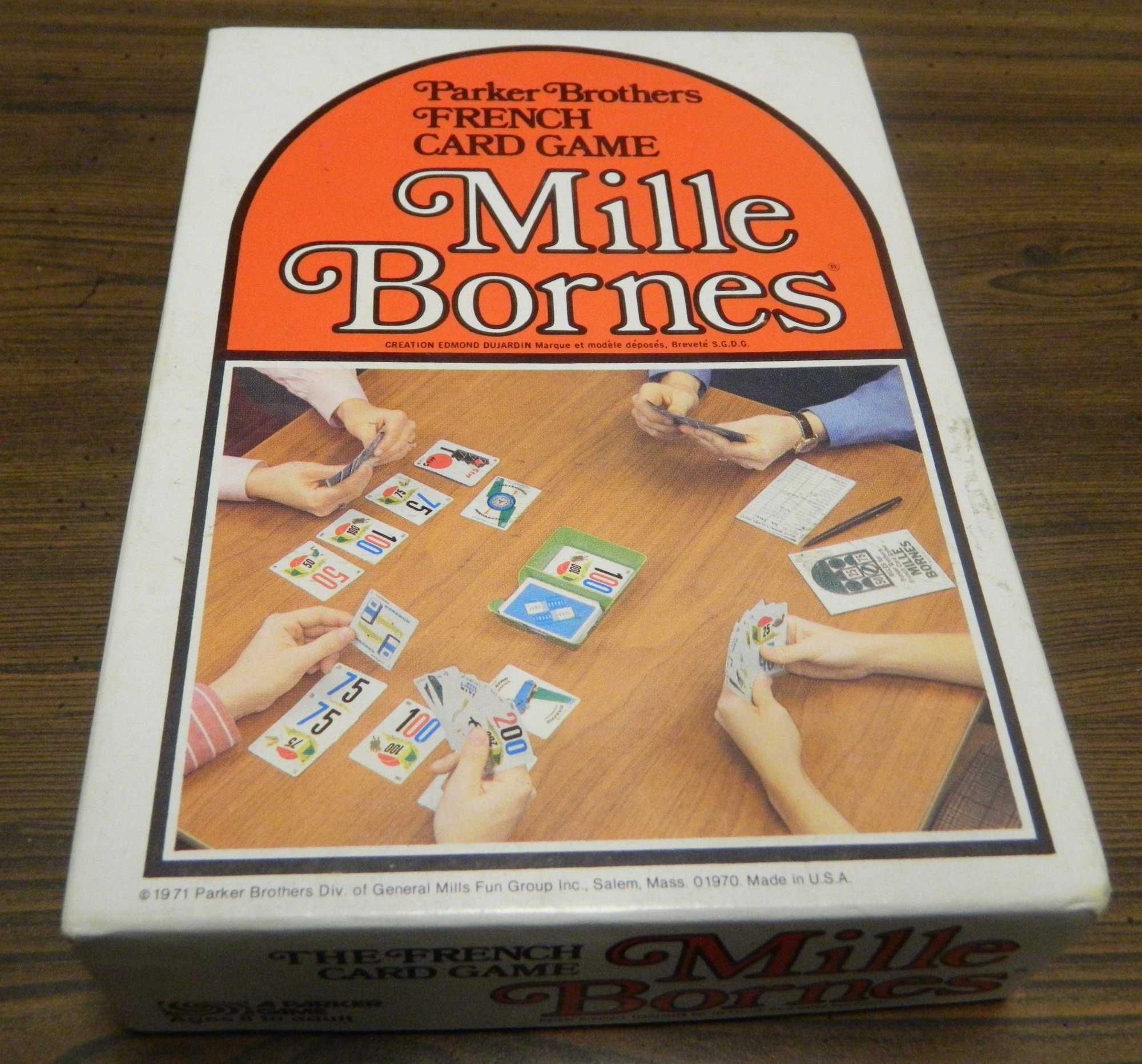 If there are four or six players, teams play in pairs and sit across from one another. The six instruction cards are removed from the deck and the rest of the cards are shuffled. Each player is dealt six cards.

Mille Bornes is played in rounds with the goal of reaching exactly 1,000 miles each round. A player’s turn begins with the player drawing a card from the draw pile. The player then either plays a card or discards a card.

A round ends when either a player/team reaches 1,000 miles or all of the cards have been played. Players score points as follows:

The game ends when one player/team gets more than 5,000 points. If two players/teams get over 5,000 points at the same time, whichever player/team had more total points wins the game.

Yesterday I looked at the game Touring. Touring is generally considered the precursor to Mille Bornes since Mille Bornes borrows the basic concept from Touring along with a lot of the mechanics. I didn’t particularly care for Touring because the game relied way too much on luck and the hazards get way out of control. So with time to refine Touring and improve the gameplay, was Mille Bornes successful? While Mille Bornes is far from a great game, it does a good job of refining Touring into a solid little card game.

While the hand size only increased by one card in Mille Bornes, that one card makes a bigger difference than you would think. The extra card gives you more flexibility in being able to hold cards as a precaution in case of a hazard card being played against you. In Touring you can’t hold a lot of remedy cards since you need to use some of your hand to hold the specific distance cards that you still need to play.

The most interesting thing about the safety cards is that you can play them right away or you can hold them in your hand and wait to play them until another player plays the corresponding hazard card against you. This creates an interesting dynamic and could make a player/team second guess playing a hazard card if they think the player/team has the corresponding safety card. You want to prevent a team from playing a safety card in this manner since they will get 300 bonus points. They also get to take their next turn immediately so your teammate’s turn could get skipped.

For the most part I like the idea behind the safety cards since they speed up the game. They are good at preventing players from getting stuck in a never ending chain of hazards. The only problem I have with them is that they are way too powerful. Basically whichever player/team gets the most safety cards will likely win the hand. Preventing certain hazard cards is powerful enough on its own so when you add in getting points for playing the cards, they become too powerful. They can also lead to a lot of worthless cards getting stuck in players’ hands.

Even though the hazard cards don’t seem to impact the game as much as they do in Touring, they still have a big impact in the game. The player/team that gets hit with the most hazards will likely lose the hand since they are still quite hard to overcome. I honestly think the game should have considered implementing a system where you score points for each hazard you overcome in a hand. This would make players more hesitant to play hazard cards since they could be giving points to another player/team. With hazards still controlling the game, there is still a high reliance on luck in Mille Bornes. Whoever draws the best cards is going to win a given hand of Mille Bornes. While there is some strategy in Mille Bornes, you pretty much have to just lay back and see how the game unfolds since luck is going to play a bigger role in who wins than who has the best strategy. Strategy doesn’t play a huge role in Mille Bornes since it is usually pretty obvious what card you should play at any given time.

Other than reducing the hazard gridlock, I really liked the elimination of the requirement of playing specific distance cards like you had to in Touring. I thought it was a stupid idea forcing players to play specific distance cards since players could be way ahead and end up losing just because they couldn’t draw the one distance card that they needed. Letting players play any distance card they want is better since it adds more strategy to the game. You don’t have to wait for a specific card to show up (except for the end of a hand) and you get to make decisions on which cards you want to play.

The biggest decision regarding the distance cards is whether to play 200 mile cards in a hand. Since you get bonus points if you don’t play any 200 mile cards, you need to really consider not using them unless you fall behind. They make the trip much easier but the bonus points are really tempting. I personally think you should hold off playing them unless you fall behind quickly and need to catch up to the other players/teams quickly.

Another thing I like that Mille Bornes did was to reverse how the speed limits/freeway worked. In Touring players could only play the high mileage cards after they had played a freeway card. This made the game start really slow as players waited to get a freeway card. Players could easily take the freeway card away as well so it was hard to play high mileage cards. Mille Bornes actually reverses how this mechanic works allowing players to play any distance card unless a speed limit card is played against them. While players do get slowed down by these cards, it is not as prevalent as it is in Touring.

Overall I found the scoring system in Mille Bornes to be pretty interesting. It does make Mille Bornes a more difficult game than Touring. The scoring is not super complicated but it takes a while to understand all of the different ways to score points. For your first several hands you will need to reference the instructions/reference cards to see how many points you earned in a round. I like the scoring system though since it gives players some choices on how to play a given hand as they pursue different ways to score points.

If I had to compare Mille Bornes and Touring, there really is no comparison. Mille Bornes is clearly the superior game in my opinion. Mille Bornes took the basics from Touring and tweaked them in order to eliminate some of the luck from the game. Mille Bornes is still far from a fantastic game since the hazards are still a problem and the game mostly relies on luck over strategy. Mille Bornes isn’t very strategic but is a simple casual game that you don’t have to put a lot of thought into.

If you would like to purchase Mille Bornes, you can purchase it on Amazon here