The youngest player starts the game as the reader. Each card has three different games on it and each game is played before the next player becomes the reader. The reader reads the questions to the other players and does not participate except for the third game on the card. After all three games have been played, play moves to the next player. 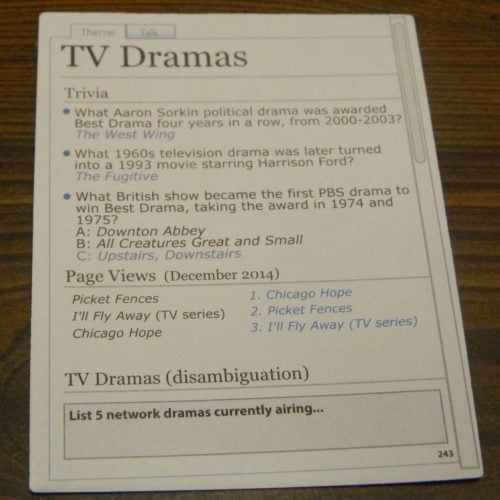 This player answered the first two questions correctly so they would get two tokens.

The second game is Page Views. The reader flips over the timer and reads the three topics related to the card’s theme. The players need to rank these three topics from the topic that had the most page views on Wikipedia to the topic that had the least page views. Players have until the timer runs out to rank the topics. Each player gets one token for each correctly ranked topic. 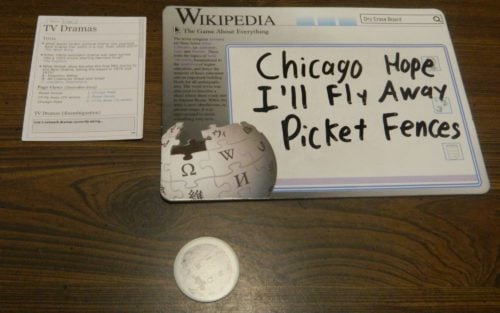 This player ranked one of the topics correctly so they will get one token.

The third game is called Disambiguation. In this game the card gives the reader a topic and the reader has to write down five things that match the topic. All of the other players write down answers hoping to match the answers wrote down by the reader. Players get to write up to five answers and have until the timer runs out. The reader then reads out their answers and sees how many matches they have with the other players. For each matching answer the reader and the player who provided the answer get one token. The reader can only earn a maximum of five tokens from this round though. 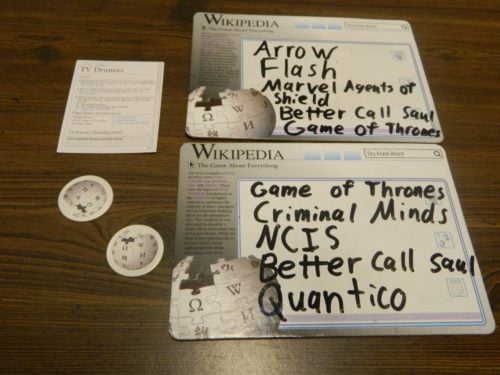 Wikipedia is one of the most popular websites on the internet. I love Wikipedia as a quick source to find information about a given topic. Being as popular as it is, it should not come as much of a surprise that there would eventually be a trivia game made about Wikipedia. Even though I love Wikipedia, I was hesitant about picking up the game because these type of games are regularly cash in games that are made to make a quick buck. Since I found the game for only $2 at a thrift store I thought it was worth giving it a shot. While Wikipedia The Game is far from original, it does a surprisingly good job at combining mechanics from different trivia games into a pretty good trivia game.

Just to get it out of the way, Wikipedia The Game is not an original trivia game. The game doesn’t do anything particularly original. Wikipedia The Game has three different games and all of them borrow pretty heavily from other board games. The first game is just a typical trivia game. The second game is probably the most original. I have never played a game where you have to rate topics based on page views but I have played games where you rank topics based on popularity. Finally the third game involves matching answers given by other players which has been used in quite a few games.

With the lack of originality, I would normally not like the game since I don’t really like games that lack originality. Despite the lack of originality I actually still liked Wikipedia The Game. The main reason I liked the game is that the game does a great job combining mechanics from different trivia games and making them into a fun package. The three different games work well together and create a trivia experience that gives players with different trivia knowledge a chance at winning the game.

Overall I would say that the trivia questions are easy to moderately difficult. If you are a trivia buff you will likely find the game to be too easy but I thought the difficulty was about right. Wikipedia The Game is not the type of trivia game where you will go rounds without answering correctly. Every player should get at least a couple tokens every round. This makes the game a much more accessible trivia game and since the game seems to have a pretty good distribution of trivia topics, the game should appeal to most people who don’t hate trivia games.

I like that the game bases each card on a different topic. I like when trivia games do this since it makes the game flow better and gives you some hints for what type of questions you should expect. As I already mentioned the card themes seem to be pretty diverse since in the short game that I played we had themes about specific states, colors, food, animals, and television. As a whole Wikipedia The Game is mostly a general trivia game.

Before playing the game I thought the most interesting game was going to be the page view game since it was the most original of the three different games. After playing the page view game I actually think it is the worst game for one reason. The problem with the game is that you will either get three, one or zero tokens. When ranking things each incorrect guess leads to at least two incorrect answers. The cards seem to have one obvious answer that would be first or last but the other two topics were pretty similar which lead to players just randomly guessing. This means that if you guess correctly you can gain a quick lead on the other players.

The best game is probably the third game Disambiguation. I have always liked these type of games where you try to match answers provided by the other players. Some of the questions are kind of hard to find five answers for but other questions provide a lot of options for answers. It is fun to see what answers the other players come up with for these questions.

The problem with the third game though is that the reader can kind of cheat. This is due to the fact that the reader is capped at only getting five tokens. This restriction is needed because otherwise the reader could get a ton of points in a given round. The unintended consequence though is if the player knows that they will easily get their five tokens, they will purposely come up with incorrect/ridiculous answers knowing that the other players won’t match them. A player would do this because why give out more chips to other players when you won’t benefit out of any matches above five. For example one of the questions we had was name five states where Alligators or Crocodiles (I can’t remember which) originally come from. Two or three of the answers provided by the reader were southern states which all of the players chose. The last two answers were random states in the center of the United States which were obvious wrong answers to prevent the other players from scoring additional points. The only way to prevent this problem would be to remove the limit for how many chips a reader can earn but that would cause its own problems.

Another small issue with game three is that since the cards does not provide any correct answers, the game does not verify that the answers provided by the reader to some of the questions are actually correct or not. You wouldn’t think two players would come up with the same incorrect answer but it is possible. Do these players still score points if they matched even if both are wrong. The game never explains what happens in this situation.

For the most part the reader is generally at a disadvantage. The reader will score the most points in game three but will rarely end up scoring as many tokens as the other players in each round. This means it is a disadvantage to be the reader. This wouldn’t be a big problem if all players were the reader the same number of times but that will rarely happen since the game ends whenever all of the chips are claimed. This means that it is likely that some players will end up being the reader more than other players. I would highly recommend forcing all players to be the reader for the same number of rounds.

The components of Wikipedia The Game are pretty standard for a trivia game. I give the game credit for the number of cards included. The game includes 300 cards and since you will only use around ten cards for each game you can get about 30 games out of it before having to repeat cards. The problem with the cards though is that the text size is quite small. The correct answers for multiple choice questions are also presented in blue which is pretty hard to see. Players without good eyesight might have trouble reading the cards.

I found the chips to be kind of cheap. They are made of pretty thin cardboard and I think the game could have come up with something better to keep score with. Only having 100 chips makes the game quite short as well. Unless the players struggle, there is a good chance you will get through all of the chips in a four player game with each player being the reader only twice. I personally would just play the game as a normal trivia game and keep track of the score on a sheet of paper.

Finally the timer is kind of pointless in my opinion. The timer is used to speed up the different games but it really isn’t necessary. For the first two games there is no reason to use the timer. All of the players will come up with their answers way before the timer runs out. My group abandoned using the timer for the first two games since we always were just waiting for the timer to run out. The timer only really serves a purpose for the last game since it limits the amount of time the players get to brainstorm answers.

Wikipedia The Game is an interesting trivia game. In general I would not like games like Wikipedia The Game since it doesn’t really do anything original. I liked the game though because it does a good job combining things from different trivia games into a nice package. The game is one of the better trivia games that I have played since it has a fair difficulty level that while not particularly hard feels fair as well.

If you would like to purchase Wikipedia The Game, you can purchase it on Amazon here