The object of the game is to score the most points by making sets with your dice. Each side of the dice has three features:  color, symbol, and number. A set consists of three dice which meet all of the following conditions: 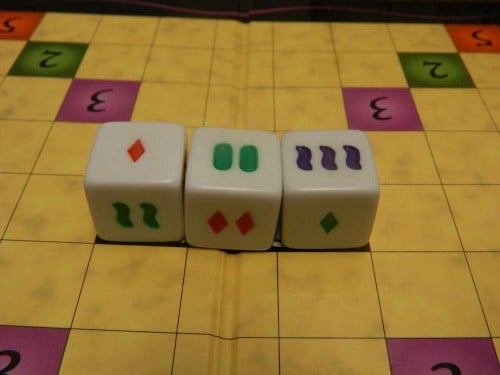 To begin the game all players take five dice from the bag at random. Once everyone has their dice, they all roll them at the same time. Each player looks at their dice and tries to find a set. If no one can find a set, all of the players re-roll their dice. When someone finds a set they place it into the center of the gameboard. 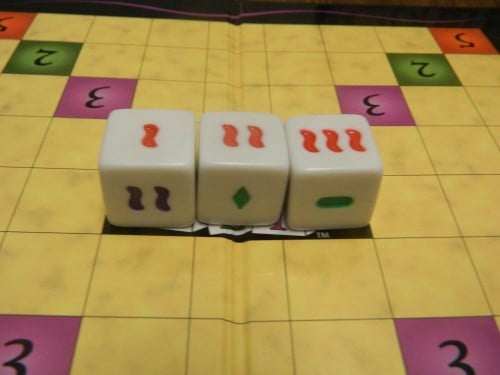 This group of three dice would create a set since all three dice have the same shape and color and all three have a different number.

Play moves to the next player in a clockwise fashion. That player can use up to three of their dice along with the dice already on the gameboard to try and form sets. Sets can only be formed horizontally or vertically (not diagonally). Dice can only be played to the gameboard if they form a set. The dice that are played only have to make a set in one direction and can touch other dice that they do not make a set with. If a player ends up forming multiple sets, they receive points for each set that was formed. 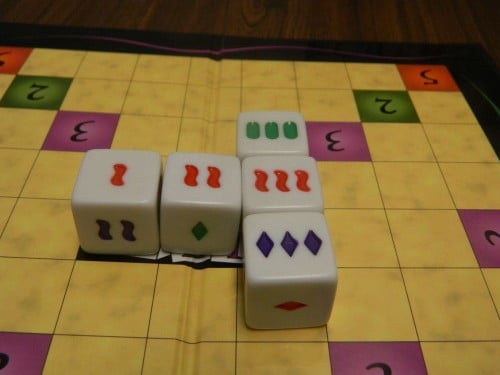 A player added the three green oval and the three purple diamond dice to the gameboard. The player will score three points for the set they created.

A player could end up rolling a wild symbol. When a player plays a wild, they must state what features the dice represents (example one blue oval). These features cannot be changed in future rounds. In a future turn if a player has a dice that matches all of the features of a wild dice that was played, that player may swap their die with the wild die. The player scores no points for the move and the move doesn’t count towards one of the player’s three dice they can play during their turn. When the player takes the wild die, they must re-roll it before they can use it.

Once play returns to the first player, a new round will begin. Each player (starting with the first player) draws enough dice to get back to five dice. Before the next round begins, each player has the opportunity to re-roll as many of their dice as they want.

When all of the dice have been removed from the bag, players use up the dice that they have remaining in order to end the game. When one player uses their last dice, the players who have yet to play that round get to take their turn. After everyone has taken their turn, the game ends. Whoever has the most points at the end of the game wins. 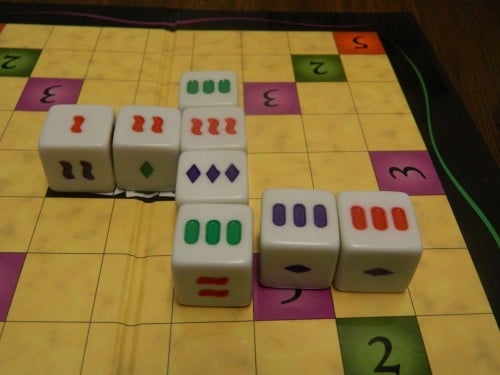 A while back I looked at the card game Set. While not a fantastic game, Set was a very solid speed/pattern recognition game. Like most popular games, the creators decided to branch off and make another game utilizing the game concepts from Set. Instead of using cards, Set Cubed utilizes dice that feature the different symbols. Set Cubed can best be described as Set + dice + the board mechanics from Scrabble. While Set Cubed tried to do some new things, it fails to add anything new to Set and is actually a worse game.

What I liked about the original Set was the game’s speed. There was little downtime as all of the players were trying to find the next set at the same time. Set Cubed pretty much ruined all of this with the dice rolling mechanic. All of the players roll their own dice and then just wait around until it is their turn to play. Without the speed element of the original game, Set Cubed just becomes a boring game to play.

Set Cubed also has a lot more luck in it than the original game had. If you roll poorly you will lose out on points that the other players are able to get with better rolls. You will usually roll well enough to make at least one set on your turn but you will need to roll really well in order to get multiple sets in one turn. The only way to build up a lead over the other players is to create multiple sets in a turn.

Luck also comes into play in how the gameboard shakes out. Being able to score bonus points on a turn is huge. Since on most turns you will only be able to make one or two sets, getting some bonus points is almost like getting an extra turn. If you get bonus points in several rounds you will very likely build up a pretty big lead over the other players.

The original Set did not have a lot of luck  in it since everyone played with the same cards. The original Set relied more on skill than luck since you needed to be able to quickly spot the sets in order to beat the other players to them. In Set Cubed you don’t need as much skill since you have a lot more time to find the various sets.

The components are solid. The dice are pretty big and are well made which makes the symbols easy to see. The gameboard could have used some work though. The artwork on the board is bland. The board is also made of pretty thin cardboard which was starting to warp in my copy of the game.

For fans of Set you probably are interested in the Set Cubed based on its’ connection to Set. Set Cubed is not a very good game though. If you want a game like Set that uses tiles, I would highly recommend Qwirkle. Qwirkle kind of plays like a mix of dominoes and Set. You play tiles to the gameboard in patterns that either match the shape or color of tiles already on the gameboard.