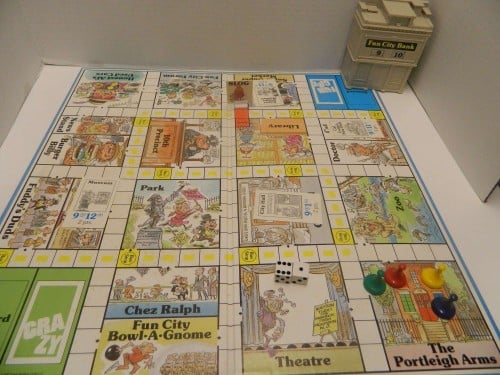 Before starting the game, place the cards on their corresponding spaces on the gameboard.

On each player’s turn the following actions occur:

The object of the game is to try and collect as many of the fun city cards that are spread around the board. In order to collect cards players need to visit the various locations around town where they are located. Players do not need to land on the locations by exact count. Fun city cards can only be collected by players if the current time is within the range printed on the card. If the current time is at the lower or upper limit the player can still collect the card. If the time has passed the upper limit the card is removed from the board and replaced with a new card. If a new card is placed on a location already occupied by a player, that player automatically collects the card. 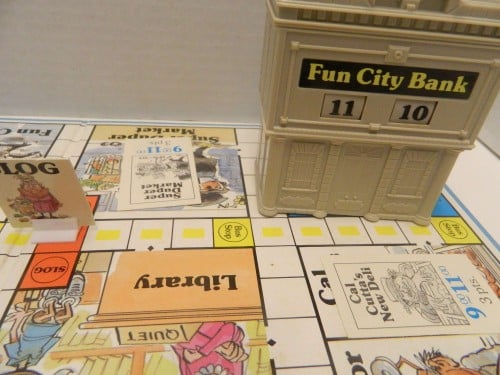 With the bank clock reaching 11:10, the two cards in the picture have expired. Both cards will be removed from the gameboard and will be replaced with two new fun city cards.

If a player does not like the crazy cards in their hand, they may at the beginning of their turn discard all three cards and draw three new cards.

Players can move in any direction around the gameboard. Players may choose not to use their entire roll but once they pick up a fun city card they cannot move any further. Players can use the different buildings for shortcuts through the city. Entering a building uses up one movement space and exiting the building uses up another movement space. To enter a building the player must enter through one of the spaces that have a small black diamond on it. 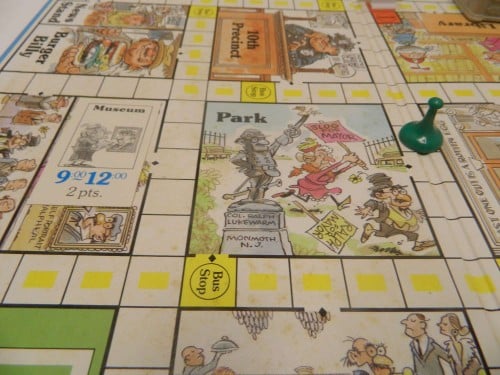 When a player lands on a bus stop space, they can choose to take the bus. If a player is taking the bus, they must announce this to the other players before moving their piece. By taking the bus a player can move to a connected bus stop and the movement only counts as one movement space. If the player moves through multiple bus stops, each bus stop counts as a movement space. A player can get on a bus during their turn, get off, and continue moving from where they got off. 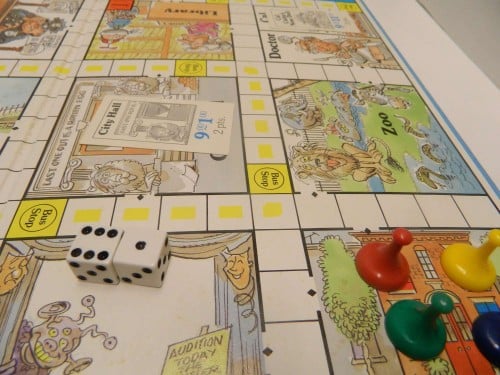 In this situation the player rolled a seven. The player can reach the city hall and collect the card that is on the space. The player could also stop on the bus stop space in order to more quickly move to the other side of the board.

The SLOG (Somebody’s ‘Lil Ole Grandmother comes into play when the symbol pops up on the bank clock. When the symbol pops up the SLOG moves from either the library or the Super Duper Market onto the street space between the two buildings. The first player to land on the space between the two buildings helps the SLOG cross the street. As a reward the player gets to move to any of the four spaces where a fun city card is located and the player gets to take the card. If a player is on the street space when the SLOG enters the street, that player gets the reward even if it is not their turn. 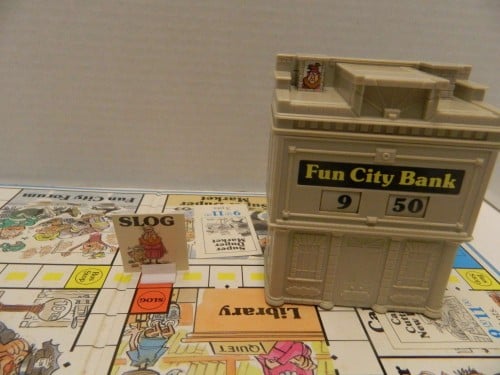 On the bank clock the SLOG indicator has popped up. The SLOG is moved into the street between the Super Duper Market and the library. The first player to help her cross the street gets to immediately move to any space on the gameboard and take the fun city card on that space.

Cards played on your turn before you roll the die:

Cards played on your turn against opponents:

Cards played on another player’s turn:

Cards that can be played at any time:

When the clock strikes 5:00, the current player gets to finish their turn and then the game ends. The players add up the points on the cards they collected. Whoever has the most points wins the game.

The thing that I enjoyed most about Fun City is that it tries to add some unique mechanics to the roll and move genre.

One of most notable mechanics added is the ability to ride the bus. The bus mechanics are far from revolutionary but they are a nice addition since they make it easier to move from one side of the board to the other. The bus gives players more flexibility on how they would like to move around the board. To balance out the power of taking the bus, the game includes crazy cards that specifically hurt players when they use the bus.

Another addition to the game is the bank clock. The bank clock is used to randomize the length of game, determine when cards are changed, and when the SLOG is put into play. While I didn’t test it, I do believe the clock is somewhat random. The randomization is not big enough to make the game that much different each time you play it but it makes it so you are never 100% sure how the game will play out. I am kind of a sucker for games that have these types of gimmicks, and that holds true for Fun City.

The SLOG (Someone’s Lil Ole Grandmother) mechanic is a pretty strange mechanic. I never thought I would play a game where you had to help a grandmother cross the street. The only problem I have with this mechanic is that it is too powerful. If you can reach the SLOG on your turn you are going to do it since you can move to whatever space you want on the board. This means that you will get to take the most valuable card on the board. Even if you could have reached the building with the most valuable card with your normal roll, you are better off helping the SLOG since you will deny the other players the opportunity to help her.

I have mixed feelings about the crazy cards. I like the creativity in the pickpocket and taxi cards. While things like flipping cards are more common in games today, back in 1987 the mechanic was probably pretty original. While those two cards are original, I wish there was more variety in the different types of cards. While playing the game it just seems like the same cards keep coming up time after time. At one point in the game each player had an Uh-Oh card played against them so no one was able to roll for a turn.

One thing I give the game credit for is the writing on the cards. I think the game did a great job by adding text to the top of every card explaining when the card can be played. For the most part the text printed on the cards also do a good job explaining what the cards do. A couple cards (the Uh-Oh card in particular) have some misleading text on the cards though that may confuse players if they don’t reference the rules.

Both a positive and a negative is the fact that there is really no reason not to try and play your cards as quickly as possible. Since you get to replenish your hand at the beginning of your turn, you should try to play all three of your cards before your next turn. I don’t know if I have ever played a game were players played their cards so freely. Generally players tend to hold back their cards to use them at the best time.  Towards the end of the game it was a rare event when players had any cards left at the beginning of their turn.

In the game I played there was actually a time where someone played a card against another player. That card was cancelled with a no way card. That no way card was then cancelled by another no way card, which was cancelled by another no way card. Another example of the chaos created by the crazy cards involved a player ending up with a negative roll since so many negative cards were played against the player that their roll and the cards they played couldn’t offset it. The chaos created by all of the cards being played adds fun to the game but it also eliminates a lot of potential strategy that could have come from players holding cards waiting for the right time to play them.

Another selling point for Fun City is its’ charming theme. What other game can you walk a grandmother across the street while completing your daily chores. Some of the Uh-Oh cards are also kind of clever/funny. What really sells the theme though is the game’s artwork. The artwork was supposedly done by Jack Davis who is known for his work at MAD Magazine. If you like Jack Davis’ art style you will probably love the artwork in Fun City.

Overall the components are pretty nice. The bank clock works well. I bought my copy second hand and the clock still worked well. Like most mechanical components though, if the game is played a lot the clock will probably eventually break. The rest of the components are what you would expect from a typical Parker Brothers game.

I have said quite a few positive things about Fun City. Even with all of those positives the game is still a pretty average game. This is due to the fact that the game is a roll and move game. The game has very little strategy so you feel like your actions have very little impact on the outcome of the game. Luck will pretty much always determine who wins the game. From rolling the dice well, to what crazy cards you get, to where and when fun city cards are put out on the board; luck has a huge impact on what happens in the game. In the game I played the winner ended up winning since they were really good with the pickpocket cards and ended up stealing most of their points from the other players.