The T-Shirt Game is a 2007 party/card game from Buffalo Games that takes a lot of mechanics from Apples to Apples. If you’ve ever played that game or have read my review of the game, you already know most of the basics of how to play this game. In The T-Shirt Game, instead of playing cards you think best represent a word, you are playing slogan cards that best fit humorous t-shirt designs.

Play begins with setup. Separate the three different types of cards (t-shirt cards, slogan cards, and hot or not cards) and shuffle each deck separately. The youngest player is the first judge and deals three slogan cards face down to each player (3-6 players can play the game). The judge then picks a t-shirt card from the deck (sample t-shirt designs include a water cooler spilling all over someone’s pants, a person actually being kicked out of his boss’s office, or two guys beating each other with books) and places it on the table so everyone can see it. Everyone except for the judge then looks at their hand and decides which slogan card (they each will have a funny caption like “At long last… the prophecy is fulfilled!,” “I am a mighty warrior!,” or “You ARE the weakest link. Goodbye.” on them) they think fits the t-shirt the best or will make people laugh the most.

When each player has selected the best slogan card for the current t-shirt, they lay it on the table face down. When everyone is done, the judge mixes them up on the table (so they don’t know who played each card) and then flips them over one at a time and reads them out loud. The judge then selects the slogan card they like the best (it’s completely up to the judge whether to pick the funniest, wackiest, or most sensible slogan). 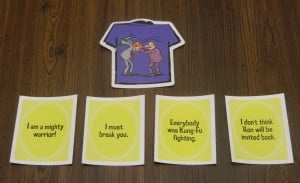 This is an example of judging in The T-Shirt Game. This round’s t-shirt is two guys fighting each other with books. The yellow cards are the submitted slogan cards. The judge will have to pick which of the four slogan cards are the best.

The player who played the winning slogan card gets to draw a card from the hot or not card deck. The hot or not cards tell the player what the “world thought of their t-shirt and slogan” and award anywhere from 3.14 (“42% of people like this shirt 60% of the time. That’s ok, but 53% of 78% would be 13% better. Keep trying!”) to 2000 points (“Chuck Norris seen in your shirt while slamming a revolving door! Nice!”). There are also a handful of “boo yah!” cards which can either be worth 400 points or traded in (only during the turn it is drawn) for the chance to steal a hot or not card from another player (any player they wish but most likely the player in the lead or with the most valuable hot or not card). If a player elects to steal from another player, that player shuffles their hot or not cards and the stealing player randomly selects one of them, keeps it, and adds that amount of points to their total. 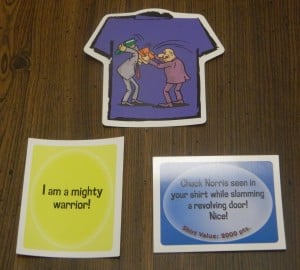 In this situation, the judge thought the “I am a mighty warrior!” slogan card was the best. The blue card is the hot or not card the winning player selected. They got really lucky and pulled the 2000-point card.

After the hot or not card is drawn, a new round of The T-Shirt Game begins. All played slogan cards and the t-shirt card from the previous round are discarded (slogan cards that weren’t played are kept). The role of the judge then moves to the next player on the left. They deal a new slogan card to all players who only have two slogan cards (players will always have three slogan cards in their hand) and pick out a new t-shirt card. The rounds continue to be played the exact same way until one player has a collection of hot or not cards worth 3000 points or more. That player is the winner of The T-Shirt Game and according to the rules can do the dance of joy.

This player got extremely lucky to pull two very valuable hot or not cards. Since their point total is now over 3000, they win The T-Shirt Game.

While The T-Shirt Game is pretty much a glorified ripoff of Apples to Apples, I still relatively enjoyed it. I would even say the game is funnier (at first) than Apples to Apples due to the humorous t-shirt designs and funny slogans. Unfortunately, the game has one absolutely terrible rule which adds a lot of unnecessary luck to an already highly luck-based game. That rule is the hot or not card rule. While the text on them can be kind of funny at times, these really hurt the game (so much that we actually ditched them before our second game). Games like this and Apples to Apples already have a lot of luck in them since you need to draw good cards (in this case slogans) that fit the current card well. If you don’t draw the right cards, you aren’t going to win.

For some reason, Buffalo Games thought there wasn’t already enough luck in The T-Shirt Game so they added another variable in the form of hot or not cards. If the cards ranged from 100 to 500 points this wouldn’t be nearly as bad of an idea (still bad just not absolutely horrible like the actual hot or not cards). However, the range on these cards is absolutely ridiculous. You could play a slogan card that fits the t-shirt card so well that everybody laughs for five minutes straight and be rewarded with 3.14 points (the lowest possible). Meanwhile, the winning player in a round where none of the answers were any good could draw the 2000 point hot or not card and be a thousand points away from winning just like that. A range of 3.14 to 2000 points is crazy and makes the game even more luck-based than it already was. A player could actually win the entire game in two rounds if they draw the 2000-point card and one of the many other cards with a value over 1000 points. Another player could win 10 or more rounds but keep drawing all the low hot or not cards and not get as many points as the other player did with just one card. Thankfully, you could easily ignore the hot or not cards and just play the game without them.

If the game would have just ditched the hot or not cards they could have added some additional t-shirt and slogan cards instead. While 209 slogan cards and 70 t-shirt cards is fine, I wish the game would have come with more. The T-Shirt Game still has a lot of re-playability (since even when a repeat t-shirt comes up, players will have different slogan cards to play with) but not quite as much as Apples to Apples. The t-shirt cards will eventually become boring and repetitive and you won’t laugh as much in subsequent games. The T-Shirt Game is probably a game you’ll get five to ten sessions out of. That isn’t bad but compared to a game like Apples to Apples, that I could see myself playing for years and years, it pales in comparison.

Oddly though, I think you will laugh in your first game of The T-Shirt Game more than you will in any game of Apples to Apples. Some of the t-shirt designs and slogan cards are really funny, especially when combined together. Even the hot or not cards I hate so much will get some laughs out of players. However, once everyone has seen all of the t-shirt designs and the slogans, the game becomes a lot less funny.

After we played a normal game of The T-Shirt game, we decided to try out our favorite house rule from Apples to Apples in this game. If you haven’t read my Apples to Apples review, that house rule is the addition of a randomly selected card thrown in with the normal submissions the judge can select from each round. If the judge picks the random card instead of any of the player’s cards, nobody wins that round. The addition of a random card isn’t quite as funny in The T-Shirt Game as it is in Apples to Apples, but they are usually much more competitive. Most slogan cards work at least somewhat well with most of the t-shirt cards, so they usually make some sense instead of being completely off-the-wall like some random Apples to Apples cards can be. However, the random card still brought some laughs and I like the added competition the house rule brings to the game.

Another rule we modified during our second playing is the hand limit of three. There were a lot of rounds where nobody had a slogan card that fit the t-shirt perfectly and everyone just decided to throw in their “worst” card, giving the judge a tough decision to make (they had to pick which card was the least terrible). We decided to increase the hand size to five cards. While this makes the cards run out quicker (especially if you are playing with five or six players), it should give you some better options for each t-shirt that comes up.

The T-Shirt Game is a pretty average game from a design standpoint. The box and the contents are very plain (and the card stock is average or below average quality). However, the t-shirts are pretty funny and the art on them is generally pretty good. While not a major concern, the t-shirt cards are a little hard to shuffle as they are actually cut like t-shirts.

The T-Shirt Game is definitely family friendly. While I’m guessing some players wish Buffalo Games would have included some more adult or risque slogan cards, I’m glad that they kept the game PG. There isn’t any swearing at all and I really wouldn’t give any of the cards more than a PG rating. The box says ages ten and up and I agree with that assessment. The T-Shirt Game is definitely a game you can play with your family and I think children will enjoy it quite a bit.