Tell Tale is a 2010 storytelling “game” from Blue Orange where the objective is to tell the best story you can based on the cards you draw. The rules include multiple ways to play, but they are all more or less the same.

The first option is called “storytime” and is used for telling a bedtime story. Have your child pick out ten or so cards and give them to you either one at a time or all at the same time. You are tasked with telling them a cohesive story using the cards as a guide. Option two is called “round ‘n round.” All players take four cards and put them in a pile in front of them without peeking at the other side. The first player flips over their top card and starts a story based on the image. The player to their left then flips over their top card and continues the story based on their image. This continues until all of the cards have been used and the story reaches its conclusion.

“Showtime” is the name of the third game. Each player takes six cards in this game and again places them in a pile in front of them without peeking at the other side. The first player starts their story by flipping over their first card but unlike “round ‘n round,” they continue using their own cards to form the complete story. After the first player has used all six cards and finished their story, the next player does the same. Each player takes their turn telling their own story and at the end of the game you can decide whose story was the best (if you wish). 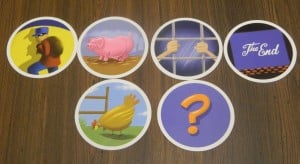 This is an example of the “showtime” game in Tell Tale. For example, this story could be about a thief who stole a farmer’s prized pig. Since this pig was famous in the town, they quickly found the thief and threw him in jail. The end. Just kidding, he didn’t learn his lesson and when he got out of jail he stole a chicken. Nobody knows what happened to him afterwards.

“Storyboard” is very similar to “showtime,” except each player gets to look at all of their cards and place them in the order they wish. Finally, the last game is the one we enjoyed the most. It’s called “the stack.” In this game, everyone is telling the same story. The first player flips over the top card in the deck and starts the story. Then the player to their left takes the next card and adds to their story and so on. Continue telling the story until no cards remain. 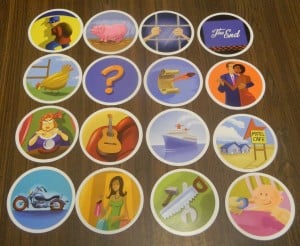 In “storyboard,” players take turns flipping over a card and adding to the story until all of the cards have been used.

None of these “games” have an actual competitive element to them but if you’d like, you could make the “winner” the player that told the best story.

Calling Tell Tale a “game” is kind of debatable. I’d say it’s more a creative activity than anything else. With there being no way to strategize, score points, or actually win, I don’t see how it can be called a game. Still, Tell Tale does have some value, just as a tool to fuel creativity, not as a game.

By far the funnest version of Tell Tale to play is “the stack.” It’s pretty boring to just tell your own story but add in a few other players who will twist and turn the story to their liking, and things could get pretty funny. The more people you have telling the story, the better and funnier it will get. For example, in our game we told the tale of Alien Bob (who you might remember from our Imaginiff review, he seems to get into all of the creative games we play nowadays) who got into a lot of crazy situations that really didn’t make much sense but still made us laugh out loud (especially when the second card we drew was “the end”). If we were just creating our own story (like most of the other game modes in Tell Tale), it wouldn’t have been nearly as funny because we wouldn’t have had as many people to collaborate with.

The other “game mode” I think is a good idea is “storytime” because Tell Tale is absolutely perfect to create a bedtime story for you kids. Letting your kids pick the story elements they wish is a good idea and then you get to tell them a custom story completely from your imagination. Tell Tale isn’t really a game, it’s a creative and storytelling tool.

However, there are a lot of problems with this “game.” First of all, you really don’t even need Tell Tale since you could just use your imagination (think of random things and put a story together using those elements), cards from Dixit or other games, or pretty much anything else to play a game like this. Also, 60 double-sided cards (for 120 total images) really isn’t that many. While the variety is pretty decent, a lot of the cards don’t work together very well. Our stories would always meander quite a bit because of how different the cards were.

Also, the cards are printed on really cheap card stock and are very flimsy. The tin is nice but the cards are cheaply made. However, the art on the cards is actually pretty good and kids should really like it.

On the positive side, Tell Tale is pretty cheap usually ranging from $10-12 on Amazon for a new copy. The game also comes in a few different versions, the original (which is the version I’m reviewing), Tell Tale Fairy Tales

, and finally a Toy Story

Tell Tale is not a game and should not be bought as one. As a tool for storytime or to help build your kids’ creativity, it’s decent but not really essential (since you could use the cards from a game like Dixit instead).