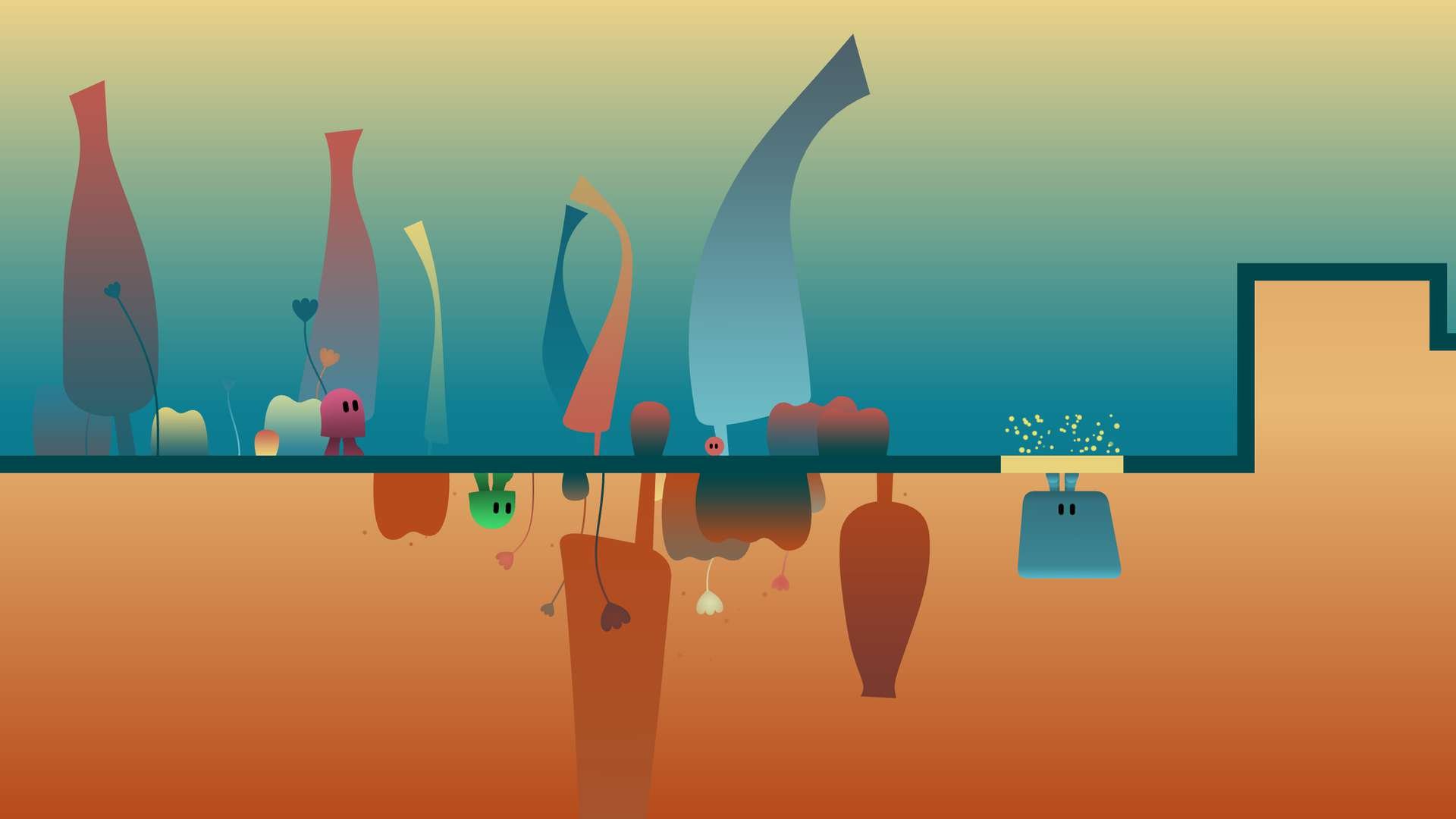 ibb and obb is a 2013 indie puzzle platform game. The game is played cooperatively where one player takes control of ibb and the other takes control of obb. The world of ibb and obb is separated into two halves. On the top half gravity works like normal while gravity is reversed on the bottom half. The two players need to work together to take advantage of both halves of the world in order to proceed in the world and solve the various puzzles that they will encounter.

ibb and obb is a unique game in that you have to play the game co-op. There is no single player so f you either don’t have a friend to play the game with, you will be unable to play ibb and obb. That would be a shame since it is a great co-op game. I actually would say it is one of the better co-op puzzle platform games since Portal 2.

The reason ibb and obb is such a good co-op game is that the two players have to work together in order to complete the game. Unlike some co-op games, one player is not able to sit back and watch the other player do all of the work. A lot of the puzzles require that both players do something at the same time. The players may need to jump at the same time or move together in order to solve a puzzle. If you like cooperative experiences, I think you will love ibb and obb.

ibb and obb really shines when it comes to puzzle design. A lot of the puzzles can be solved pretty quickly and won’t tax your brain. Some of the puzzles are intricate though and require quite a few steps to complete. Your timing and communication with your partner will be tested by ibb and obb. While some of the puzzles require a decent amount of trial and error, the designers did a good job making the punishment for failure limited. The only real punishment for failure is waiting to be respawned and being sent back a little to the last checkpoint. Since there is pretty much a checkpoint after every puzzle, you won’t have to worry about backtracking.

A couple of the puzzles can be frustrating to solve though. This is usually due to the puzzles being so clever that it is not obvious what you need to do in order to proceed. In these situations you need to just try everything until you figure out what the designers had intended for you to do. There were a couple times where I came up with a crazy idea that I thought had no chance at being right and it turned out to be the right solution. When you finally figure out the solution to a puzzle, you feel smart for solving the puzzle which is always a good sign for a puzzle game.

I would say that ibb and obb takes around five to seven hours to complete. If you are a completionist you are looking at probably 10-12 hours. The game is spread out into 15 levels with each level being longer than you would expect. At $11.99 the game is a little expensive for the length but you could also do a lot worse. If you have a friend that doesn’t currently have the game you may want to consider purchasing the double pack since it is only $2 more at $13.99. Price conscious buyers may want to wait until a game bundle which is how I picked up the game.

Before playing ibb and obb I thought it was going to be just another average indie puzzle platformer. I was pleasantly surprised by the game though. The game has creative puzzles that do a great job of utilizing the cooperative element of the game. At times the puzzles can get frustrating but once you have solved them you feel a sense of accomplishment. If you have another friend that enjoys puzzle platformer games, you should really check out ibb and obb.