Imaginiff the love of your life were a piece of advice. What would they be?

That’s the gist of “Imaginiff,” a game where players must answer questions about their families, friends, and loved ones (in occasionally insulting ways) and try to match the responses of the other players in the game.

The game begins with setup. The game board has eight spaces that you can write names on using a dry-erase marker. Write down the names of each of the players in the game and add some other people everybody knows if you need more names to fill in all eight spaces. All players are then given a pawn and a set of answer cards (with the numbers 1-6 on them) which they will use to lock in their answers.

The game then begins. One player rolls the dice and moves the grey token that many spaces around the name track (those eight names you wrote down during setup), which is on the outer ring of the game board. Whichever name the token lands on is the subject for this round’s question (for this example, let’s say the name landed on was Steve). The player who rolled the dice then draws a question card and reads it out loud (adding Steve’s name since the question will be about him). All players (including the one who read the question) then pick out the answer they think fits Steve best and lay down the corresponding answer card. 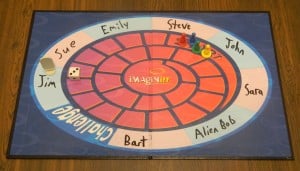 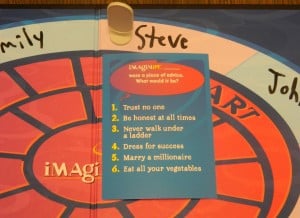 In this round, the question will be “Imaginiff Steve were a piece of advice. What would it be?” All players think and then lay down the numbered answer card that corresponds with it (if they think the best answer is “marry a millionaire” they should lay down their #5 answer card).

When all players have locked in their answers, everybody reveals their answer cards and the results are tabulated. Anybody who picks the answer with the most votes gets to move a space on the game board. If the person who rolled the dice and read the question got the answer “right,” they get to move two spaces instead of just one. If two or more answers are tied (for example three of the six players picked #1 and the other three picked #4), everybody with one of those answers gets to move forward one space (and the reader still gets two spaces). If everybody managed to pick a different answer (which did happen in my four player game a couple times but with bigger games is either completely impossible or very unlikely), nobody moves ahead. The first player to get their pawn to the center of the board (24 spaces away) is the winner. 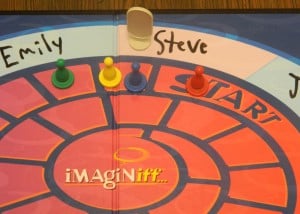 There is a special space on the name track that says “challenge.” If a roll takes the grey token to that space, the player that rolled the dice gets a chance to play a “challenge round.” They pick one other player to play with them, roll the dice again to move the grey token and determine who the question will be about, and reads the question. Only the two players involved in the challenge round may answer this question. If the two players match, they each get to move four spaces forward. If they fail to match, they move backwards two spaces. The game then continues as usual.

I played and am reviewing the 2006 revised edition from Buffalo Games. The back of the box says that over 100 of the 183 question cards are new and updated and that appears to be the only thing different about the revised edition (compared to the original Buffalo Games version). However, there have been many versions of Imaginiff made since the game was created in 1998 (the initial Buffalo Games release, the revised edition, a 10th anniversary edition, and a newer release from Mattel in 2010) and some of them include new rules. The 10th anniversary edition includes a new type of card, a “pick-a-player” card where you choose a player that fits the description provided instead of choosing an answer to fit the player (basically the opposite of what you normally do in the game). The 2010 Mattel version changes the rules quite a bit and includes a third type of card, “versus” cards, which have players pick between the card reader and the selected name on the name track for the question. Since I played the older version of the game I have no idea how these new ideas play, but they do sound like positive changes.

If I was forced to grade the 2006 revised edition of Imaginiff as just a game, I would say its mechanics are lacking and that the game is basically just a heavily luck-based game that allows you to insult your friends and family a bit. However, I don’t grade just based on the game mechanics. While original and great game mechanics are certainly welcome, the most important factor in grading a game is the fun factor. Imaginiff scores very high in fun factor, in fact it was one of the funniest games I have ever played.

At first, our game wasn’t exactly going well. Since I was playing with my family and we didn’t really want to insult each other, the game wasn’t really that funny because we would always pick the boring answers. However, things changed completely when we decided to ditch our own names and replaced them with fictional characters and people we dislike (various politicians including the current governor of my state, a certain real estate mogul known for his “hair”, and other annoying or horrible people). This increased the fun factor ten-fold since we could be much more candid and the questions became much funnier. For example, one of the names on our board was Mickey Mouse. We got a question about what Mickey Mouse would do if he were honked at by an impatient driver. One of the possible answers (which ended up being the “right” answer in our game) was “get out of the car and threaten the driver.” Imagining Mickey Mouse threatening someone because he got honked at had me laughing hysterically.

We also decided to get creative and made up our own completely fictional character for one of the spaces. We simply wrote Alien Bob with no further explanation of who he was and developed him as the game went on. Every time his name would come up, we would all lock in our answers based on what we thought Alien Bob would do and whatever answer was most popular would become part of his official backstory (subsequent questions would be answered based on the information we knew thus far). By the end of the game we found out that Alien Bob was at one time a defendant in a court of law, that he could contact the spirit world which eventually made him go crazy, has a huge collection of garden gnomes, and hates “The Sound of Music.”

Obviously if you are playing with friends that won’t hold back and will rag on each other, Imaginiff is fine the way it is meant to be played. I would definitely make sure that everybody in your group has a sense of humor and doesn’t mind being insulted (even though the answers are pretty tame and some don’t even have an insulting answer). However, if you are playing with your family and don’t want any arguments or hurt feelings, I definitely recommend playing with fictional characters, celebrities, and other real-life people you love or hate. It will make your games so much more fun and have you laughing out loud. Adding a blank canvas character (like our Alien Bob) could also be a fun idea as long as your group is creative and not particularly competitive (since this obviously adds a lot more luck to the game since you have to guess that your version of the character is the same as your opponents’ versions). It is a very fun experience to build a character completely from scratch.

Imaginiff is definitely better with more players, it is a party game after all. We played with only four players and it was way too easy to match with the top answer. With four players you just have to match one other person and you will at least tie for the top vote getter. The game can support up to eight players and I definitely recommend playing with at least five or six (preferably the full eight).

Compared to most party games, Imaginiff isn’t even in the same realm of raunchiness or inappropriateness. This definitely isn’t Cards Against Humanity, the worst cards we had only had slight insults on them (for example a card that asks what role the person would play in a court of law includes “defendant” as a possible answer). The game isn’t for children but not because of the subject matter, just because they won’t understand a lot of the questions or answers and even if they do, they probably wouldn’t enjoy a party game like this. The box says the game is for ages 10 and up (other versions have raised the recommended age to 12 or even higher) but I personally think only teenagers or older players will enjoy Imaginiff.

Outside of not really being a great “game” from a gaming standpoint (which the fun factor more than makes up for), the only other real problem with Imaginiff is the lack of cards. The version I played only has 183 question cards, which really isn’t that many. It doesn’t sound too bad but even in a four player game like ours, we went through 20-30 cards per game (and that amount will only get higher as the number of players increases). That means that you will only get through about six games of Imaginiff before you start seeing repeat questions. However, the game does have some re-playability since the names on the board can be changed and if you get a repeat question, it will likely be about somebody else than the first time it was asked. Buffalo Games still should have included at least twice as many cards as they did. The Mattel version has raised the amount of question cards to 264 but that still isn’t enough.

The card stock for the question cards is also kind of poor and the cards are a lot bigger than they would have had to be. The rest of the components are just average quality. The board erases fine but it would be very easy to accidentally move your piece the wrong way (the board layout is quite odd).

At the time of this review, Imaginiff is very cheap to buy. New copies are less than $20 on Amazon and used copies are dirt cheap. It is also a very common find at thrift stores, I will almost always see a copy of the game in at least one thrift store during a thrifting run (for $2-3 or even less). Even though I haven’t played it, based on the new card types the Mattel version has I would probably pick that version of the game but if you find a great deal on one of the older versions, they are worth picking up as well.

Imaginiff is a party game so it really isn’t a great game from a gaming standpoint. It is more of a game to play when you just want to have fun and insult some people instead of playing a highly competitive game. Jokes will be told, feelings may be hurt (just slightly), and quite a few laughs will be had. If you like party games (especially less raunchy ones), Imaginiff is definitely for you.