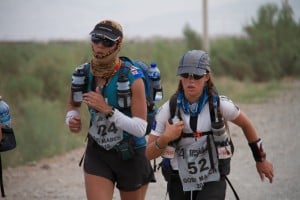 As a runner who has completed a handful of races (including two half-marathons, though with some very slow times), the concept of ultramarathon running has always fascinated me. I obviously still have a lot of training to do, but some of the top items on my bucket list are some of the craziest ultramarathons on the planet. While I don’t think I could ever complete any of the four races featured in Desert Runners (except for maybe The Last Desert Antarctica) due to the heat (as a Wisconsinite I’m more of a cold weather runner), as soon as I heard about the documentary I wanted to watch it. I almost universally love the endurance racing documentaries I’ve seen (Spirit of the Marathon, Running the Sahara, The Ride, Ride the Divide, the TV series Boundless, etc.). Unfortunately, while Desert Runners is still good, I just didn’t enjoy it as much as the other similar documentaries I’ve seen.

Desert Runners features four runners who aren’t satisfied with just completing one of the four races in the 4 Deserts Ultramarathon Series, they are attempting to run all four in a calendar year to complete the Grand Slam. Each race covers 250 km (a little over 155 miles) and is run over five consecutive days (they will run almost six marathons in five days), all in some of the most grueling deserts in the world. The four racers are Dave (an older, ordinary guy from Ireland), Ricky (a 33-year-old American living in England who had only run a 10K before signing up for this series), Samantha (a 25-year-old Australian trying to become the first female and youngest ever racer to complete the Grand Slam), and Tremaine (a former military man who lost his wife to cancer and is using these races as part of his grieving process).

These four racers are tackling some of the toughest races in the world. The first race takes place in the Atacama Desert in Chile, the driest desert on Earth which hasn’t seen rainfall for the last 400 years. Next, the racers tackle the Gobi Desert in China, which is the windiest desert on Earth (this doesn’t sound too bad until you realize that the temperature can vary by as much as 60 degrees in a single day). The third race is in the Sahara Desert in Egypt and is the hottest of the four races (the Sahara can reach temperatures of up to 122 degrees). Finally, they head to Antarctica (which is technically a desert because of its lack of rainfall), which is obviously the coldest desert on Earth (this is the one race I could actually see myself being able to complete someday). 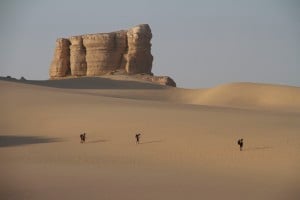 Unlike most endurance racing documentaries, Desert Runners doesn’t really show any training or spend some time to stop and smell the roses. I think the documentary bit off a more than it could chew in some ways. Focusing on four racers through four different races forces the documentary to spread itself a bit too thin. In most similar endurance racing documentaries (that focus on just one race), they have the time to really develop their racers and make you love them. You also get to see just how much effort it takes for them to complete the race. While the racers are pretty likeable (especially Samantha, Tremaine, and Dave), I just didn’t feel like I got to know them as well as I would have liked. Tremaine is really the only racer that actually gets a good amount of development. The documentary also shows next to no training and just focuses on a couple problems the racers have during the races. Without seeing the process, a normal person who doesn’t know much about endurance racing will have no idea how big of an accomplishment completing these races is. The documentary doesn’t even show all the runners finishing each race.

I think Desert Runners should have tried to just focus on two racers (probably Samantha as their competitive runner and Tremaine for his story) so that more time could be spent on them (instead of having to be spread amongst four different racers). Otherwise, I would have cut out one of the races (or more likely just go through it in a couple minutes) or increased the length of the film (even though it’s already 95 minutes long).

In addition, there is also a bit too much text to read in Desert Runners. I don’t mind reading text in documentaries from time to time, but they really should have had a narrator or asked the four racers to explain things on camera instead of relying on text. I personally don’t mind but the documentary also has quite a bit of swearing, especially a lot of F-bombs from Ricky so it really isn’t suitable for children (though I doubt they would be interested in watching people run anyway).

On the positive side, it isn’t shocking that the four deserts are a great setting for some gorgeous scenery. While the first three deserts are pretty similar looking, there are some very beautifully shot scenes in all of them. However, The Last Desert in Antarctica is where the beauty really comes out. I want to visit Antarctica someday and Desert Runners definitely made me want to visit it even more. The documentary also has some pretty high quality video and audio.

Desert Runners is surprisingly one of the more terrifying documentaries I’ve seen lately. Tragedy strikes (to a non-featured racer) during a particularly bad day in the Gobi Desert race. In addition, all four of the featured racers struggle with some very scary problems. Tremaine gets injured (not during a race but it still slows him down), Ricky and Dave struggle with keeping food down in the middle races (Ricky even has a bit of a health scare), and Samantha almost gets assaulted during the Sahara Desert race in Egypt. Samantha’s situation is especially terrifying and I can’t imagine how much pain Ricky and Dave went through.

While I have mentioned quite a few negatives, Desert Runners is still a very solid documentary and I would recommend it for runners and endurance racers (especially ones who love documentaries). However, I’ve just seen too many superior endurance racing documentaries to give it more than just a slightly above average rating. If you watch Desert Runners and like it, make sure to check out Spirit of the Marathon

(my personal favorite, I’m sure the sequel

is good too but I haven’t seen it yet), The Ride

(to see The Amazing Race’s Phil Keoghan ride a bike across the United States), and the TV show Boundless (which is basically the same as Desert Runners only it features just two racers and can go more in-depth since it has forty minutes to spend on a single race).