To be the last player that still has chips remaining.

Give each player ten chips. If you are using the deluxe set of cards, remove one of the two “Snafooey” cards. Shuffle the rest of the cards and deal four to each player. The players roll the dice and high roller becomes the first player.

Each round begins with the count at zero. Players take turns playing cards to the discard pile and announcing the new total to the rest of the players. Each number card is worth the number of points printed on the card. For example if the current total is ten and a player plays a three card, the new total is thirteen. After the player plays their card, they draw a new card to get back up to four cards. If the player forgets to draw a card, they lose that card for the rest of the round. If a player runs out of cards because they forgot to draw new cards, they are eliminated from the game. 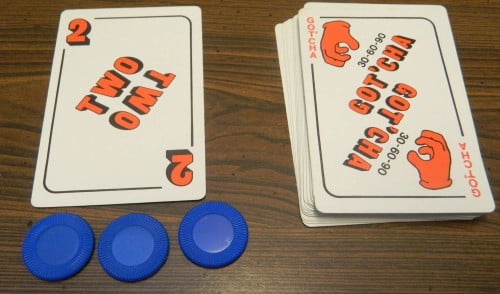 The previous player played a got’cha card raising the total to 90 points. Since the current player only has number cards, they take the total over 90 points which means they lose three chips.

All of the numerical cards in the game are worth the number of points printed on the card. The deck includes several wild cards though that don’t add to the current total but have their own special abilities that are activated when they are played. 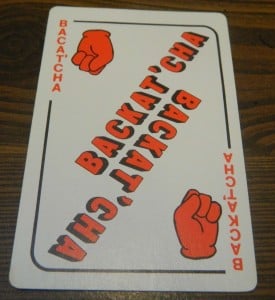 Back-At-Cha: When the card is played, the turn order reverses to the opposite direction. If play was previously going clockwise, play will now go counter-clockwise and vice versa. 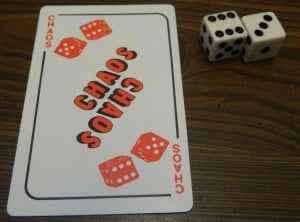 The current player has rolled an eight. They will add eight to the current total. 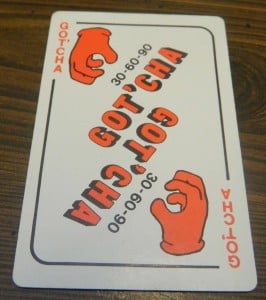 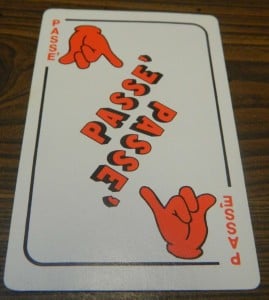 Passe: When played the card adds no points to the current total and the player’s turn is over. 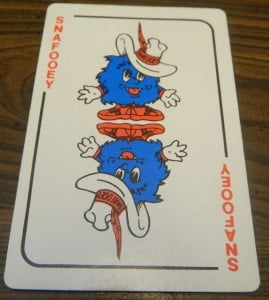 Snafooey: The Snafooey card can only be played if the current total is 30, 60, or 90. When this card is played all of the players, other than the player who played the card, have to roll the dice. The player who rolls the lowest number doesn’t lose any chips. All of the other players lose the corresponding number of chips based on the current total (30-1 chip, 60-2 chips, 90-3 chips). If there is a tie for the low roll, the tied players roll again to break the tie.

After a Snafooey card is played, the player that increases the total past the current threshold won’t lose any chips. If a player plays a Got’Cha card the total will be increased to the next threshold number.

If there are only two players remaining the rules for the Snafooey card are altered. The player who didn’t play the cards rolls the dice. If they roll less than seven they don’t pay a chip penalty, and the number rolled is subtracted from the current total. If the player rolls seven or higher the players loses the corresponding chip penalty.

A game of Snafooey ends when all but one of the players have lost all of their chips. The player who still has some chips remaining wins the game.

We at Geeky Hobbies have played a lot of card games over the years. When you play a lot of games you are bound to run into games that feel very similar to other games that you have played in the past. While playing Snafooey I kept having a sense of deja vu. As it turns out I have played several games that share a lot in common with Snafooey which include 5 Alive, Boom-O, O’NO 99, and Over and Out. Despite the obvious case of deja vu, Snafooey is not a bad card game.

While Snafooey lacks originality, you can still have a decent amount of fun with the game. Snafooey is never going to be a game that you put much strategy into but it works pretty well as a filler game. The game plays quickly and it is simple enough that you can easily teach it to new players. Shafooey is the type of game that you just play and see who ends up winning.

When you get to one of the threshold numbers the game becomes a game of who has the most non-number cards. Players who have few non-number cards are going to lose their chips quickly. Players who have a lot of non-number cards will rarely ever lose chips. The Snafooey card in particular is really strong since you can force multiple players to lose chips. This is the perfect illustration of why luck is so important in the game. If you draw good cards you have a good chance at winning the game. If you draw bad cards you have no chance at winning the game. In one round you could lose most of your chips (happened to me) or you could quickly go from first place to being eliminated (happened to another person in the game that I played). Snafooey has a lot of luck involved which means that there are large swings in momentum in the game.

The biggest problem with Snafooey is just the lack of originality. I have played at least four games that are essentially the same as Snafooey with only minor differences. All of these games, except for O’NO 99, came out after Snafooey so Snafooey didn’t copy them but they are still very similar. O’NO 99 was created two years prior to Snafooey though and Snafooey shares a lot in common with it. The only real differences between Snafooey and O’NO 99 are a couple of the special cards and the fact that you count to 30, 60 and 90 instead of 99 like you do in O’NO 99.

I wouldn’t say Snafooey is significantly better or worse than all of these other similar games. The games just share so much in common that they don’t differ enough to distinguish themselves. Basically if you already own one of these games, you own all of them. Unless you prefer some of the special rules in one of the games, there really isn’t much reason to have one game over another. If you already own one of these other games I don’t think it pays to pick up Snafooey.

The one area where Snafooey distinguishes itself from the other games is the Chaos card. The Chaos card is interesting since it adds a little strategy to the game. Generally you are only going to play it when the total is 30, 60 or 90 but there are some other uses for the card. If you want to increase the total quickly you can use the card and hope to roll higher than a seven which will increase the total quicker. If the total is close to 30, 60, or 90 you can also use the card to try and lower the total a little so you aren’t stuck playing on one of the threshold numbers on your next turn.

Finally I think Snafooey’s components are kind of dull. Usually the artwork in these type of games is dull since the theme is rarely important to the game. I give the game credit for trying to create a mascot for their game but otherwise the artwork is pretty boring. The cards serve their purpose though but they could have looked a little more interesting.

After reading the review section you probably think that I did not enjoy Snafooey since I spent a lot of time talking about Snafooey’s problems. Snafooey is not a bad game though. I had fun playing the game and I like that the game plays quickly. Snafooey just isn’t that original. There are so many other games that have the same premise as Snafooey with only slight differences in gameplay. Add in the high amount of luck and Snafooey fails to be anything more than another average board game.

If you already own another similar card game, I probably wouldn’t recommend Snafooey since other than a couple small differences, the game isn’t that different from many other games. If you don’t own any of the other games, I would probably pick up one of the other games since they are generally cheaper than Snafooey and they don’t play that much differently. If the concept interests you though and you can find a copy of Snafooey for cheap, I don’t think you will be disappointed with Snafooey.

If you would like to purchase Snafooey you can find it on Amazon. Snafooey