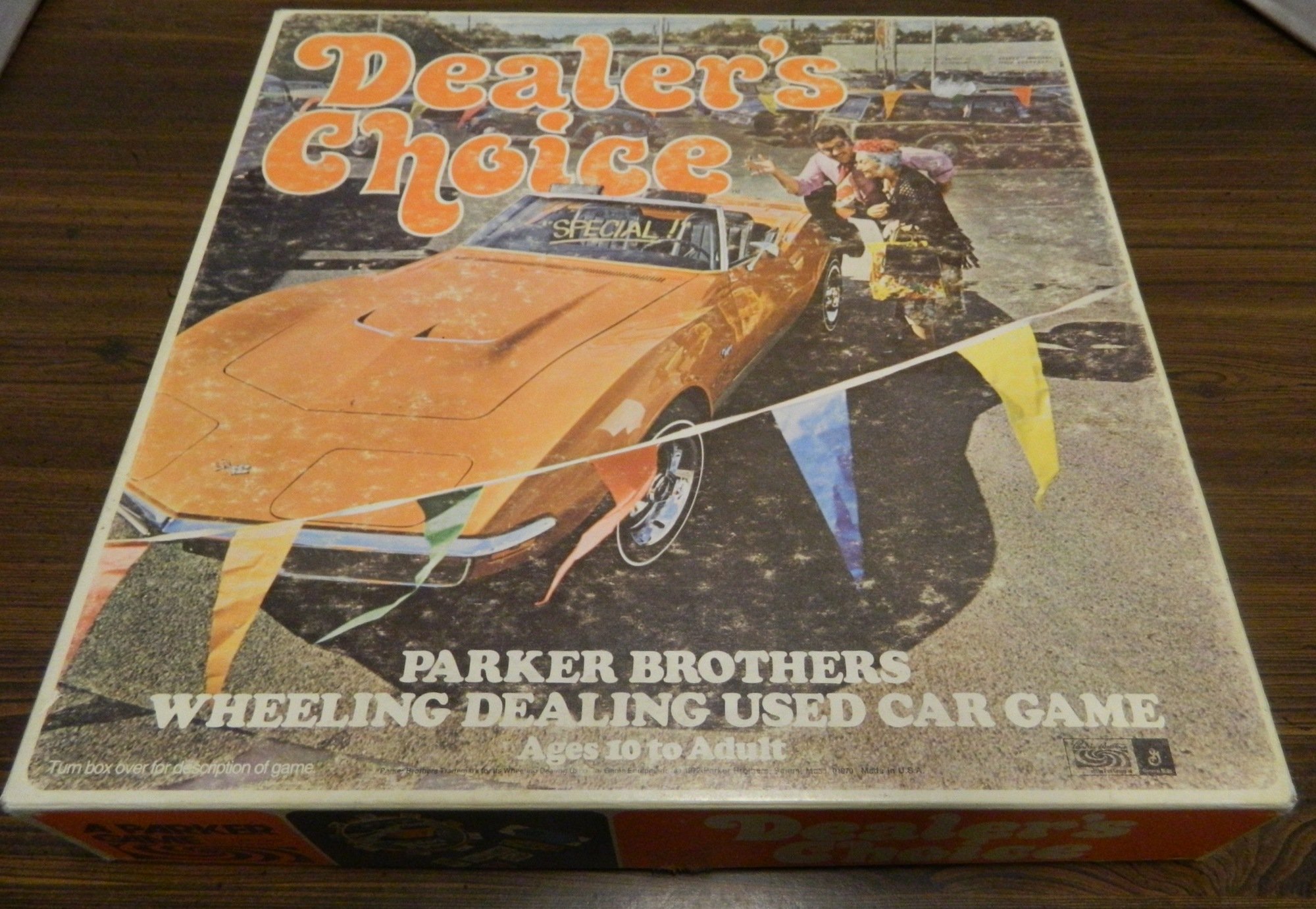 Separate the auto, insurance and dealer’s choice cards and shuffle each deck individually. These cards are then placed in their corresponding spots in the organizer.

Each player is given 1-$10,000, 2-$5,000, 3-$1,000, 3-$500, and 5-$100. Cash must be displayed so all players can see how much money the other players have during the game. Each player also takes a blue book and a value card. The value card is placed inside the blue book so the numbers on the value card can only be seen by the player who owns that blue book. Each player is dealt one insurance card, 5 dealer’s choice cards and some auto cards (3 players-4 cards, 4 players-3 cards, 5 players-2 cards). The auto cards are placed face up so all of the other players can see them.

The player to start is chosen in any agreed upon fashion.

One of the key mechanics in Dealer’s Choice is the difference between the list price and blue book values of the cars. Each car has a list value which is printed directly on the card. The list value for the car is the same for all players. Each car also has a blue book value which will be different for all of the players. This value is found by each player by looking up the number printed on the card on the value chart inside their blue book holder.

On a player’s turn they follow these set of steps:

At the beginning of a player’s turn they must have at least two cars in their lot. This requirement is reduced to one car when there less than two auto cards left in the auto exchange (draw pile). If the player has two or more cars, this step is skipped. If the player has less than two cars, they must buy enough cars to reach two cars in their lot. Players can buy cars from the auto exchange (draw pile) for $4,000 without looking at the car or they can pay the list price of the car after it is flipped over. Players may also use one or more of their dealer’s choice cards for other options of acquiring cars.

After a player has met the lot requirements they can chose one of the following actions for their turn:

Open A Lot For Business

After performing one of the actions for their turn, a player has the option of opening their car lot for business. This action is optional. If a player opens their lot for business they will be forced to sell one of their cars to one of the other players. When opened all of the other players can bid on one or more of the cars. The dealer must then select one of the cars to sell and if multiple players bid on the car, they must choose which player they want to sell to. The dealer can choose to sell the car for the amount bid or they can try to get more money by making a counteroffer to the bidder. The buyer then must either accept the new offer or they can “Look Under the Hood”.

Looking Under the Hood

Dealer’s Choice features five types of insurance. Fire insurance covers fire damage, theft covers theft, and collision covers collisions. Comprehensive covers all three types of damage. Fly By Night is worthless and doesn’t cover anything. Players can acquire insurance throughout the game by using their turn to buy a card for $4,000 or they can play a dealer’s choice card that gives them another insurance card for free.

Insurance cards are used when a player tries to burn, steal or crash one of your cars with one of their dealer’s choice cards. If a player is covered for the damage that another player is trying to do to their car, they have the choice to use the corresponding insurance card to force the player that is playing the card to pay the owner of the car the list price of the auto. When an insurance card is played it is shuffled back with the other insurance cards in the draw pile.

If a player uses an insurance card to prevent a car from being crashed or stolen, they can still play the stolen car found card or pay half the list price in order to keep the car in addition to receiving payment from the other player.

Sell Cards: Cars are sold to the bank and are retired from the game.

Buy Car Of Your Choice From Another Player: The player who plays the card gets to choose which car they want and make an offer for it. The seller can accept the price or demand a higher amount. If the seller counteroffers the buyer can either accept the counteroffer or “look under the hood”. Collision, Fire, and Stolen Cards: To save a car in a collision a player must pay 1/2 the list price to keep the car. If a car is stolen the player has to play a stolen car found card immediately in order to keep the car. A burned car is destroyed automatically and is removed from the game.

Cancel: Can be used to cancel a player’s insurance policy when it is played to protect a car. Lot Closed: Can be played at any time to prevent people from buying cards through a “Forced Sale” or other buy card. When played, this card and the other card played are both discarded. Just looking at the box you can tell that Dealer’s Choice is from the 1970s. The artwork is so reminiscent of the era and I don’t think you would see a used car salesman game today. I can’t even think of another board game about being a used car salesman. The game actually does a pretty good job simulating the theme of being a car salesman since you are wheeling and dealing trying to get and sell the most valuable cars for your lot.

The game shares quite a bit in common with games from the 1970s. I do give the creators credit though since the game has a lot more to it than most board games from the 1970s. Its a 1970s game that doesn’t feature any roll and move mechanics which is pretty rare especially for a Parker Brothers game. For its’ time you have to give Dealer’s Choice credit for creating an interesting and unique game. While the mechanics are pretty light, Dealer’s Choice does quite a few things right. I had fun with the game and people interested in the theme should enjoy the game. Unfortunately in some areas the game seems to be outdated.

One of the most important things in Dealer’s Choice are the Dealer’s Choice cards. While you can perform actions without them, they drive most of the actions in the game so it is important to draw good cards and keep a lot of cards in your hand. For example the easiest way to sell your cars to get money to buy new cars is to use a sell card. With Dealer’s Choice cards being so important I kind of wish the game would have had an action where you could draw two additional cards for the main action of your turn since this would have given you flexibility and allowed you to draw more cards and improve your odds of drawing the card you really needed.

Dealer’s Choice has quite a few cards that can be used to mess with the other players. Probably a  fourth of the Dealer’s Choice cards directly mess with other players. Some players like games where you can mess with other players while other players don’t really care for the option. While there are too many of the cards in the game, I give the game some credit for implementing some ways to lessen their impact on the game. You can mess with players a lot in the game but there are ways that players can reverse their fortunes against the player that is targeting them. I think making the player that causes the damage have to pay for the car when an insurance card is played is a great idea. It makes you think about whether you truly want to target another player with the risk of getting hit with the insurance bill.

This reversal of fortune is also prevalent in “Look Under the Hood” negotiations. This mechanic is really interesting since either player could end up winning in a negotiation. A player could get a really good deal on a car but the seller could also end up selling the car for a lot of money. If the blue book value of a car is high a seller can play hard ball with a buyer because if the buyer doesn’t take the price offered they could get stuck with paying the high blue book value. This makes things interesting in negotiations because buyers never know for sure if they are going to be stuck paying a high Blue Book value for a car.

While negotiation plays a roll in who wins the game, luck may play a bigger role. Card draw is quite important. You are going to want to draw the right Dealer’s Choice cards at the right time. The auto cards you draw are even more important. Drawing valuable cars can have a pretty big impact on who wins the game (if you aren’t stuck paying list price). One player that gets lucky and gets a lot high value cars for cheap has a very good chance at winning the game. Getting the right cards for your Blue Book will really help you win the game.

Speaking of the Blue Books, while the value cards are pretty balanced it doesn’t mean that they are equal. I really like the idea behind the Blue Book values since I like that all of the cars are worth different values to different players. A car that is worthless to you might be worth a lot to another player. This forces players to buy and sell cars with the other players. I think this is a good idea because it promotes back and forth trading and can even result in trades where both players are happy with the trade.

Component wise the game is what you would expect from a 1970s Parker Brother game. The cards are kind of bland since they are just cards full of text. The auto cards do include pictures of the cars though which is pretty nice. I also like the storage tray even though it is not particularly necessary. My biggest complaint with the components are the rules themselves. The rules could be written better since there are several situations that aren’t explained in the rules. For example what happens if a player opens their lot and none of the players are interested in any of the cars that are for sale? Is a buyer forced to buy a car and the seller forced to sell it?

Dealer’s Choice is what you would expect from 1970s Parker Brothers game. The theme of playing as a used car salesman is a good idea. The game is easy to play and has some interesting ideas for its’ time. Unfortunately the game relies too much on luck with the luckiest player likely to win the game. Overall Dealer’s Choice is better than a lot of Parker Brothers games but is still a pretty average game.

2 thoughts on “Dealer’s Choice Board Game Review and Rules”