The object of 5 Alive is to be the last player with an “A-L-I-V-E” card face up.

To start the game each player gets a set of “A-L-I-V-E” cards and 10 cards from the deck. Each player takes turns placing cards from their hand into the center of the table. Most of the cards in the game are number cards. Each number card that is played to the table adds the face value of the card to the current running total. Players are unable to take the total over 21 points. If a player doesn’t have any cards that won’t push the total  over 21, that player must flip over one of their “A-L-I-V-E” cards. The total is reset to 0 and play passes to the next player.

In addition to number cards the game comes with some wild cards which are as follows: 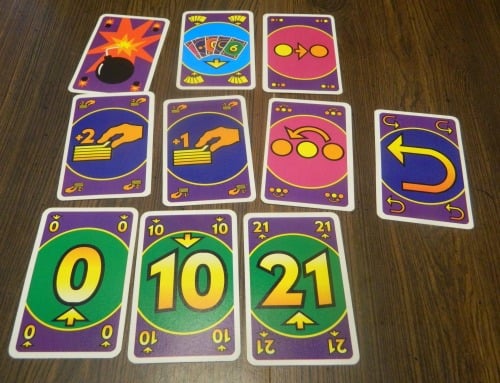 In the picture above all of the special cards in the game 5 Alive are pictured. The top row includes the Bomb, Hand In & Re-Deal, and the Pass Me By cards. The middle row contains the Draw 2, Draw 1, Skip, and Reverse cards. The bottom row contains the =0,=10, and =21 cards.

“A-L-I-V-E” cards are turned over in the following situations: 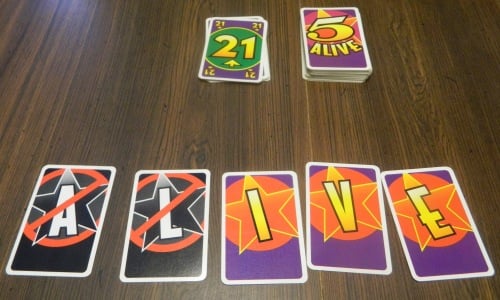 5 Alive is actually quite a bit like the game Boom-O. Since 5 Alive was actually created before Boom-O, I actually see Boom-O as a reimplementation of 5 Alive. The two games have a couple different special cards, the players only get three lives in Boom-O instead of the five in 5 Alive, and instead of counting to 21 in Boom-O you are counting to 60 seconds. Otherwise the games are very similar.

Overall I would call 5 Alive a completely average card game. You have fun playing the game but it is far from spectacular. The game’s strategy comes down to when you choose to play your cards just like most typical card games. The order in which you play your cards will have an effect on the outcome of the game. For example if you know that one of your opponents have no low cards remaining, you need to try and raise the total to 21 in order to force them to lose an “A-L-I-V-E” card. You should also try to keep a 0 card around in case one of the other players have a bomb card that will be played in a future turn.

Like a typical card game though, luck is a huge factor in the game. If you get the right cards you are almost guaranteed to win while if you get the wrong cards you will have a hard time winning the game. Luck plays even a larger factor since some of the cards are kind of rigged.

First the game has too many “wild” cards. With so many wild cards it is very hard to force a player to lose an “A-L-I-V-E” based on not being able to play a card. None of the special cards add to the running total so there is no punishment for playing “wild” cards. In an extreme case if a player somehow only gets wild cards they are almost guaranteed to win the hand. Every turn you will be able to play a card and since none add to the current running total, there is no danger of going over 21.

Second some of the “wild” cards seem to be way more powerful than others. The draw cards in particular are way too powerful. By playing a draw card you essentially gain at least one or two free turns. Since on most turns you are able to play a card, this means that a player who plays a draw card has a pretty big advantage over the other players. The bomb card may be even more rigged since it essentially guarantees that at least one of the other players will lose an “A-L-I-V-E” card. In the game I played not a single time did all of the players have a 0 card in order to counteract it. That is especially true since it makes sense to hold the bomb until near the end of the hand since it is more likely to get some of the players who ended up having to use their 0 cards earlier in the hand.

On the other end of the spectrum, the Pass Me By card is pointless. It serves the same purpose as a 0 but can’t be used to counteract a bomb. The card is pretty much only useful to avoid losing a card when the total is 21. In addition the cards that set the score to 21, 10, or 0 points also don’t seem to serve much of a purpose in the game. The 21 card could have been useful to take an “A-L-I-V-E” card away from another player but as I mentioned earlier there are too many “wild” cards and 0’s that it is very hard not to have a card to play when the total reaches 21.

In addition to some cards being overpowered, I had some issues with the conditions under which players lose “A-L-I-V-E” cards. I don’t mind the bomb rules or the 21 rule, but I have an issue with the rule where all of the players besides the player who cleared their hand losing an “A-L-I-V-E” card. I think this penalty is too harsh especially since the player who clears their hand first is usually because they got a good hand of cards. Instead of punishing all of the other players, I think the first player to play all of the cards from their hand should be able to flip one of their “A-L-I-V-E” card face up. This would reduce some of the impact that luck would play in the game.

When I played the game, I started the game with four and the game played pretty well. As players were eliminated it became pretty obvious that 5 Alive plays better with more players. While the game says that it can be played with 2 players, based on experience it is not very fun. When our game got down to 2 players the game’s outcome essentially came down exclusively to luck. Unless one player makes a stupid mistake, the player who got the better hand is guaranteed to win each hand. In addition to playing with more than two players I would recommend using the alternate method for the end of the game. If you use the normal method, you are almost guaranteed to get into a situation where there are only two players left and that creates a very anticlimactic end to the game.

Overall the card quality is solid. The cards are made of typical card game card stock. The artwork is solid and looks like what you would generally expect from this type of card game. The numbers and symbols are large and are easy to see. I do think the creators could have done a better job picking symbols for a couple of the cards though.

Overall 5 Alive is a pretty average game. You have fun playing the game but it relies too heavily on luck and it is not highly original. If you already have other similar card games like Boom-O, 5 Alive doesn’t add a lot of new elements. If you like card games though and can find the game for cheap it is probably worth picking up.

[…] plays pretty similarly to UNO. It just so happens that Boom-O is a re-implementation of the game 5 Alive which was created by the same company that created UNO. 5 Alive and Boom-O are so similar that […]

I am wondering if you know where I can purchase 5Alive. It hasn't been made since the 90's and I am having difficulty finding the game. Amazon has it for $25 and ebay has one for $10 on a bid with international shipping (I think). Any tips you have on where I can purchase the game would be appreciated. Thanks.

I purchased my copy of the game from a thrift store so that is not particularly helpful. As far as I know Amazon and Ebay are generally the best places to buy older games that are no longer printed. Another option would be to check out the marketplace on BoardGameGeek.com where various users of the site put up games from their own collections for sale. At this moment though there aren't any 5 Alives for sale but in the future someone may put one up for sale.

Otherwise there are probably some other smaller websites that may have the game for sale but you need to be careful and make sure they are legit and reputable businesses before purchasing from them.