The object of the game is to not lose all three of your ticking time bomb cards. The players take turns playing a card onto the discard pile. Cards either have a number printed on them or they are a special card. The game begins at 0 seconds. Each number card that is discarded adds that many seconds to the current total. Players need to try and avoid taking the total over 60 seconds. Players can end up losing one of their bombs in the following situations: 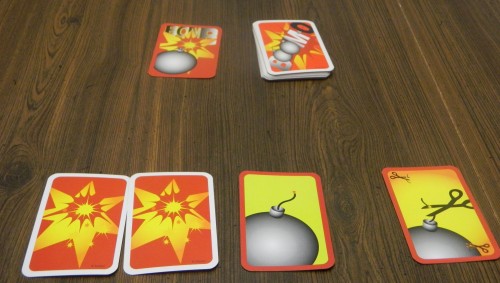 In the picture above a bomb card has been played. If the player doesn’t have a hold card (the card in the bottom right corner), they would lose their last bomb card and would be eliminated from the game. 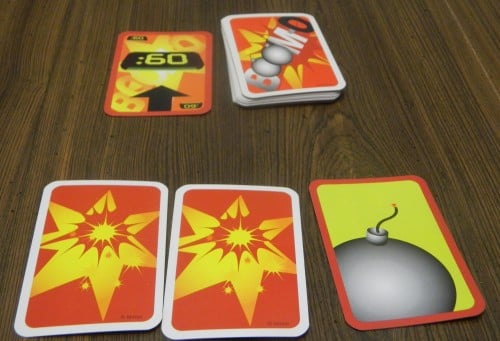 Whoever is the last player with a bomb remaining, wins the game. For a quicker game, Boom-O can be played where whoever has the most bombs remaining when the first player loses their last bomb is the winner. 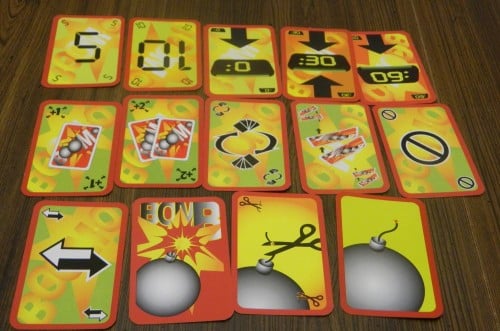 The picture above shows all of the different types of cards in Boom-O. The top row shows all of the cards that affect the running total. The second row is as follows: draw 1, draw 2, trade hands, double play, and skip. The bottom row shows the reverse, bomb, hold and the ticking time bomb cards.

Boom-O is a card game created by Mattel in 2000 that appears to have gone out of print in 2005 according to Board Game Geek.

For a quick comparison for Boom-O you need to look no further than UNO. I personally like UNO and play it occasionally. While not exactly the same game, Boom-O plays pretty similarly to UNO. It just so happens that Boom-O is a re-implementation of the game 5 Alive which was created by the same company that created UNO. 5 Alive and Boom-O are so similar that there are only a couple minor differences between the two games. Since they are both essentially the same game, I don’t see any reason to own both games.

Overall in my opinion Boom-O is another completely average card game. Boom-O is a perfectly playable game and you can get enjoyment out of it. I had some fun playing the game. The game is pretty easy to learn and games should only last around 15-20 minutes. Boom-O would work best as a filler game during a game night. There are better card games out there though so it wouldn’t be a game that I would play all the time.

Boom-O has some strategy to it but I wouldn’t call it a strategic game. The order in which you play your cards is important and does impact the game. The problem is that it is pretty obvious which card should be played in any particular situation. Generally speaking you want to play all your number cards while the running total is still low. Typically you want to try and get rid of all of your “10” cards as soon as possible since these cards don’t provide for a lot of flexibility. Once you have either run out of number cards or the running total has reached 60 seconds, you want to start playing your special cards. You probably want to keep your bomb and hold cards as some of your last cards since they will become more valuable the longer you hold them.

Just like Alive 5, Boom-O has some balancing issues with the cards. The bomb, hold, double play, and draw cards are easily the strongest cards in the deck.

The bomb card is also valuable as long as you play it at the right time. The bomb does have a big disadvantage if played incorrectly, but based on my experience it is rare that all of the other players have a hold card at the same time. Also the longer you wait to play the bomb card, the easier it will be to get a player who doesn’t have a hold card. The bomb is so valuable since you usually gain an ticking time bomb advantage over at least one of the other players whenever you play it.

While it might not seem like it at first, I think the hold card is one of the most valuable cards in the deck. First the hold protects you from any bomb that gets played. For this reason you should try to keep your hold cards for as long as you can. If a bomb never gets played you can just use the card as a normal card that has no effect. Unlike most of the other cards that have a drawback, the hold card really doesn’t have one.

Finally the double play can be very dangerous if played in the right situation. If played at the right time, there is no defense to it. If the player that it is played against doesn’t have any number cards they are going to lose one of their bombs. The card is hard to plan for since you generally want to try to get rid of your number cards as early as possible. If the card is played when the running total is at 60 it is particularly dangerous since the only card the next player could play to avoid losing a bomb is one of the cards that resets the clock. The double play can backfire though since if the next player is able to play both cards, they end up gaining a card advantage over the player who played the card.

Luck plays a pretty significant role in the game. If you have bad luck you are not going to win. There is several ways bad luck can hurt you. If you get a lot of number cards instead of special cards you are unlikely to win. You will likely fall victim to taking the total over 60.

Also either on purpose or by accident, all of the players could end up ganging up on one player. If multiple people play cards that adversely affect you, you will most likely get eliminated pretty quickly. In one game that I played all of the players ended up ganging up on my (just by coincidence, not on purpose). Not surprisingly I lost my first two bombs before anyone else even lost one. At this point the unlucky player will probably be put out of their misery quickly. This could lead to quite a bit of downtime for that player as they wait for the other players to finish the game.

It just so happens that in this game I was actually able to end up winning the game. The main reason I ended up winning is that the other players then started to target one another and started taking each other out. My luck also improved pretty significantly. I actually kind of liked that Boom-O has this ability for quick swings in momentum. It makes players feel like they still have a chance at winning even if they are currently pretty far behind.

Finally I would say that the contents are solid. I think the game could have done a better job selecting the symbols used for some of the cards, but for the most part the cards are self-explanatory. The instructions could also have been written a little better. Otherwise I didn’t have any other issues with the contents.

Boom-O as a whole is a very average card game. The game relies pretty heavily on luck but it is also quick and fun. If you like games like Uno I think you will like Boom-O. If you already own 5 Alive or another similar card game though I don’t think it pays to pick up Boom-O since it is not unique enough in my opinion to warrant a purchase.

Over and Out Card Game Review | Geeky Hobbies

[…] playing Over and Out I kept thinking about Boom-o and 5 Alive. The main concept behind all three of the games are exactly the same. Players play […]