How to Play Set

Set is a quick paced, visual perception game. The object of the game is to identify the most “sets” during the game.

Each card in Set has four different attributes:

Each round begins with one player becoming the dealer who puts out twelve cards onto the table face up. All players except for the dealer all try at the same time to find a set. When a set is found the player calls out “set” and picks up the cards. The other players check to make sure that the cards form a set. If the player was successful in finding a set they get to keep the cards and three new cards are placed out on the table. If the player was unsuccessful in finding a set, that player loses one point and the cards are put back onto the table.

If all of the players agree that there are currently no sets on the table, the dealer deals an additional three cards to the table for a total of 15 cards.

Play continues in this matter until all of the cards have been played to the table and no more sets can be found. Players count up the sets they found during the round and they receive one point for each one. Another round is begun in the same fashion until all of the players have been the dealer for one round. After everyone has been the dealer once, whoever has the most points is the winner. 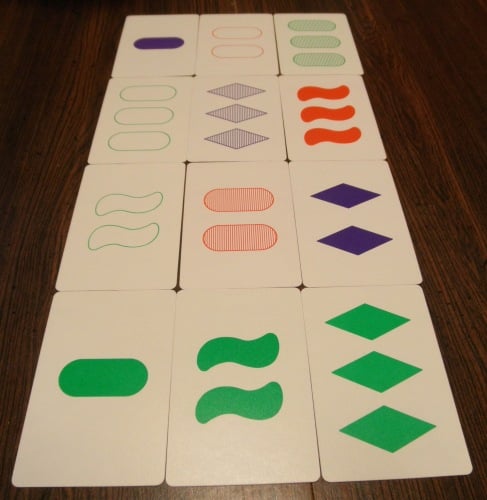 My Thoughts on Set

It is hard to explain but Set is a fun game. I think the main reason the game is fun is due to the competitive nature. I am a sucker for competitive card games where everyone plays at the same time. Set is no different since it can be quite exciting trying to find the sets before the other players. The game is fun but it really isn’t the type of game that you could play for hours at a time. I think at max you could play one or two games and then put the game away for a while.

If you have never played Set before you probably think that the game sounds easy. While the game is not hard to learn or play, in order to play the game well requires quite a bit of concentration. Even though there is only three options for the attributes, the game requires concentration because you need to meet the rules for all four attributes at the same time. You will regularly run into a set of cards that meet three of the requirements and that final attribute will mess everything up. You need to take your time to make sure that the cards are a set but you also need to think quickly in order to grab the set before another player grabs it. Therefore you need to be really concentrating in order to not make mistakes.

Overall the contents are of an okay quality. The card stock is a little thin/flimsy which doesn’t work great for a game where people may be quickly picking up cards. If you take care of the cards though they should last for quite a while. The artwork is nothing special but you really can’t expect anything more from a game like this. The artwork just shows the shapes and nothing else. This is helpful when you are trying to focus on the shapes themselves. I do wish they would have come up with something else for the third type of shading though. When quickly looking at the cards the striped shading can mess with your head for both the filled and outlined shading.

One issue I have with the game is the recommended age. The game is recommended for ages 6+. I don’t know if it was just me but I think a six year old would have some trouble playing Set. Set requires a lot of concentration and attention to detail which I don’t think very many six year old children would be good at yet. The rules do mention that with smaller children one of the attributes should be eliminated. The rules recommend removing all of the colors except for one. This way you only have to focus on three attributes. I am guessing that this will make the game quite a bit easier but I still think the game would be pretty hard for small children. If you were to eliminate one of the attributes I would recommend eliminating the shading attribute since in my opinion that attribute gave me the most trouble.

Another issue I had with the game was that the penalty for incorrectly picking a set was too harsh. The penalty is obviously in place in order to stop people from just blindly picking up cards and wasting time. If the point penalty was enforced in one of the game I played though, there would probably have been some very low scores since every player messed up a couple times due to missing one of the attributes. We ended up deciding to change the penalty. If someone made an incorrect set they would have to sit out until another player correctly found a set. This stopped people from just randomly guessing but wasn’t as harsh as losing a point which equates to losing a set every time you made a mistake. Another option could be for the player to have to sit out for a minute while not being able to look at the cards.

Should You Buy Set?

Overall Set is a solid game. It is not groundbreaking or a must play game but the game is still fun to play. If you don’t like games where everyone plays at the same time or you don’t want to put the necessary concentration into the game, Set is probably not for you. If you like competitive card games and think the concept sounds interesting I don’t think you could go wrong with Set.

Length of Game: 10 minutes per hand

[…] I like both Qwirkle and Set I was excited to give Iota a chance. While still an average to an above average game, Iota […]

[…] while back I looked at the card game Set. While not a fantastic game, Set was a very solid speed/pattern recognition game. Like most popular […]

[…] to be a lot more common than you would expect. As a matter of fact I have already reviewed the game Set. Set is quite a bit like Hocus Focus but instead of wizards the game uses shapes. Set also requires […]