Every so often you will run into a board game whose concept/theme defies explanation. Having played so many different board games I have to say that I have encountered some strange games in the past which includes a game based entirely around boogers. Today’s game, Push Over, joins the list of the weirdest games that I have played. As the box explains, Push Over is the “Piggy-back Marathon Game”. I have played a lot of strange games but I never thought I would be playing a game based on piggy-back rides and yet here we are with Push Over. While the theme is obviously the first thing that catches your eye, Push Over actually has some interesting mechanics beneath the surface that I was interested in checking out. Push Over may have some interesting mechanics but they unfortunately don’t really do anything to make the game anything more than another boring roll and move game.

How to Play Push Over

A player begins their turn rolling one of the dice. The player then decides whether they want to roll another die or if they want to move their playing piece. 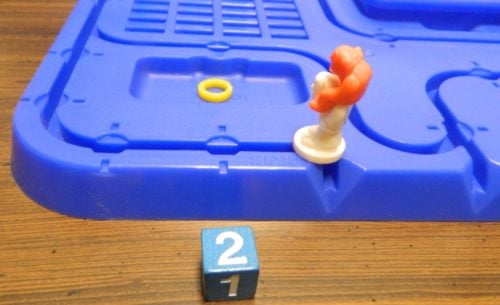 On their first roll the orange player rolled a two. They can either move two spaces or roll their second die.

If they choose to move their playing piece they move their piece clockwise around the board the number of spaces that they rolled. If another player’s piece is in their way, the player pushes that piece along with their own piece.

The player otherwise could choose to roll another die and add the new number to their running total. If the total is more than four, the player has “rolled out” (see below). If their total is four or less they can either move their piece or roll another die (if they have only rolled two dice so far). If they choose to move their playing piece, they will move two times their total if they rolled two dice and three times their total if they rolled three dice. 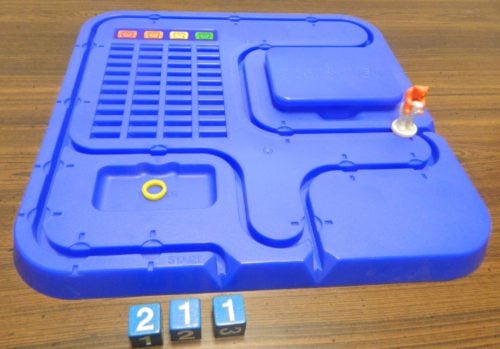 This player rolled a four between three dice. They will get to move their playing piece twelve spaces (4 x 3).

If a player has a total higher than four they have rolled out. When a player rolls out they remove their colored playing piece from the white piece and place it back at the start. If a player rolls out on one of the first four spaces they get to put their playing piece on the fifth space. The white piece stays on the space that it was left on. One chip is also added to the pot. On the player’s next turn, if a white piece was pushed off the board (or to the fifth space if the player is on that space), the player takes it for their colored piece and they get to start moving again. If no white pieces are available the player skips their turn until one becomes available. 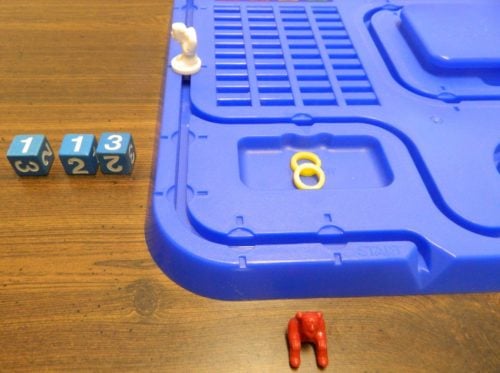 While pushing another player’s pawn, if a player moves enough spaces to move past one off the push off spaces they can push all of the pieces in front of them off the board. The players who were knocked off will start their next turn on the start space. 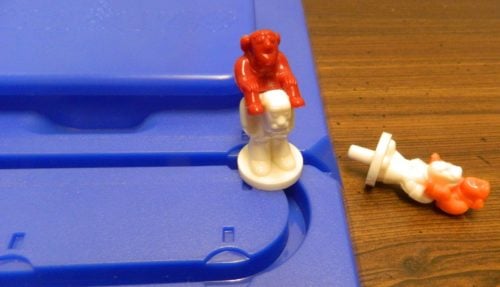 The red player has pushed the orange player off the gameboard.

When a player’s playing piece makes it around the entire board and reaches the space above the pot, they collect all of the chips in the pot and place them in their section of the score board. A chip from the storage container is placed into the pot and the next player takes their turn. 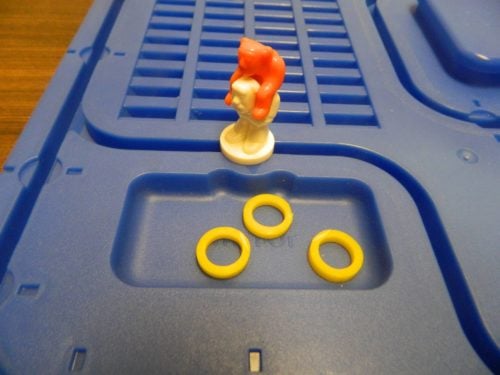 The orange player has made it through the entire board so they will collect all of the chips in the pot.

The game ends when a player has acquired 10 chips (8 chips in a two player game). This player wins the game. 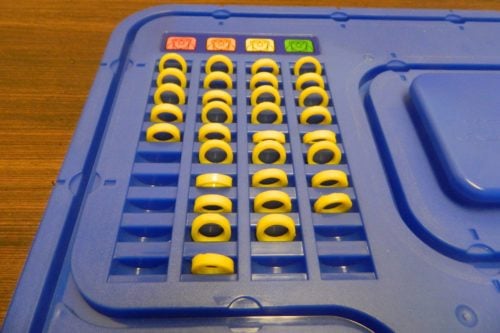 The orange player has acquired ten chips so they have won the game.

My Thoughts on Push Over

Back in the 1970s and 1980s the larger board game publishers like Parker Brothers and Milton Bradley tried to branch out from their roots of mostly traditional roll and move games. While some of the games they created in this era actually introduced some unique mechanics, for the most part the two companies focused more on strange new themes. This lead to Parker Brothers to work with Alex Randolph (Code 777, Enchanted Forest, Inkognito, Ricochet Robots) to develop Push Over. While the thought of a piggy-back riding game didn’t really appeal to me, seeing as the game was made by an accomplished board game designer I was actually interested in checking out Push Over.

While reading through the rules I actually thought Push Over could be a pretty interesting roll and move game. The reason that I thought Push Over could differentiate itself from most roll and move games was the fact that the game actually has a pretty substantial press your luck mechanic. The game has players roll one die at a time. For each die a player rolls, they will add a multiple (2X, 3X) to their total which allows the player to move more spaces around the board. Your goal is to keep your total below five though so you need to decide whether to take a risk of rolling too high for a chance to be able to move your piece more spaces.

For a 1980s roll and move mechanic this is actually a pretty unique mechanic. I think it could have actually lead to a pretty good roll and move game. The problem is that in execution it just doesn’t work as well as you would expect. I think the main problem is that the decisions that the game presents you with are pretty obvious for the most part. As each die features two ones, two twos and two threes it is quite easy to figure out the odds for any decision. Some of the time you will have a 100% or 0% chance of adding to your total so in these situations the decision is made for you. Otherwise in non certain situations you will either have a 1/3 or 2/3 chance of adding to the number of spaces you can move. Usually you are best off playing the odds.

One of the reasons that I thought the press your luck mechanics would work was because I thought the punishment for rolling out was actually pretty severe. Being sent back to the start ends up not being that big of punishment. With how few spaces there are on the board you will usually lose one turn at max waiting for one of the white markers to be pushed off the board. I think the biggest punishment for rolling out may be adding another chip to the pot. Since you could end up collecting that chip, that is also not that big of deal.

Since the press your luck mechanic doesn’t add much to the game, you are basically left with a pretty generic roll and move game. Like with most roll and move games that have little decision making, Push Over relies on a lot of luck. Whichever player rolls best is likely going to win the game. Rolling well in the game is especially helpful since the board has so few spaces. From the start space to the final space there are only sixteen spaces. If you are already on the main section of the track it only takes thirteen spaces to make a full trip around the board. If you are able to roll a total of four in three rolls you will move twelve spaces. So with one roll you can almost make it around the entire board. Rolling well also increases the odds that you can push one of the other players off the board.

All of these problems lead to Push Over being a pretty boring game. At its core the game is just another roll and move game. The press your luck mechanics are usually obvious enough which mostly leaves you with just the rolling mechanics. Basically the players take turns rolling and moving until one of the players have earned enough chips to win the game. If you don’t mind a game where you just roll the dice and see what happens, you may have a little fun with Push Over. Otherwise you likely will find the game to be quite boring.

With regards to the components there are some things that I liked and other things that could have been better. While I thought the piggy-back mechanic was pretty stupid, I actually really like the playing pieces. The playing pieces are surprisingly detailed and it is kind of cool how the smaller pieces latch onto the white pieces. The gameboard is pretty durable and the pieces slide around the track easily. The gameboard is quite dull though. The biggest complaint I had with the components were the chips which are pretty cheap yellow rings. While the rings are only used to indicate the current score, I think Parker Brothers could have done more with them.

Should You Buy Push Over?

Push Over makes an interesting first impression with its strange premise but that impression does last long. Before playing the game I thought the press your luck mechanic was actually going to be an interesting addition to the roll and move genre. The mechanic doesn’t really work that well though as it is pretty obvious what decision you should make and the punishment for making the wrong decision is not that severe. As the press your luck mechanic doesn’t really work, Push Over mostly ends up relying on which player rolls the best. This all leads to a pretty generic roll and move game which get boring pretty quickly.

Unless you really enjoy quirky roll and move games, there probably isn’t going to be much for you in Push Over. If you don’t mind a pretty generic roll and move game that has a light press your luck mechanic, you may have some fun with Push Over. I would only recommend picking up the game though if you can find it for cheap.

If you would like to purchase Push Over you can find it online: Amazon