To collect all five types of booger cards and collect the “Eat the Booger” card while another player controls the booger.

Each player selects a playing piece and places it on the start space. Shuffle the cards and place them on the corresponding spaces on the game board. Each player rolls the die and whoever rolls highest will get to go first. 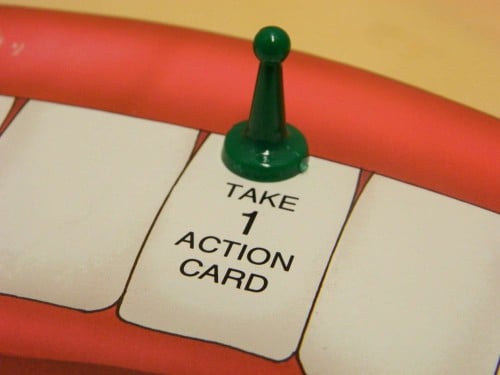 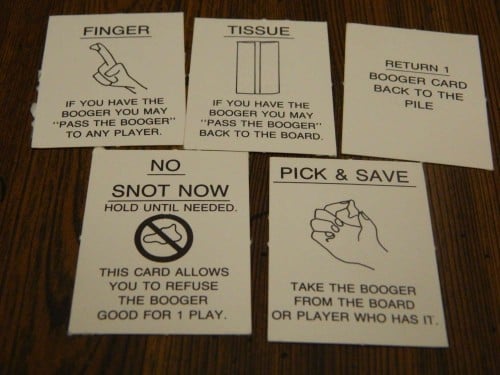 All action cards other than the “No Snot Now Card” must be played immediately. The action cards perform the following actions:

If you land on the “Eat the Booger” space and you either don’t own all five different types of boogers or you control the booger, nothing happens and your turn ends. 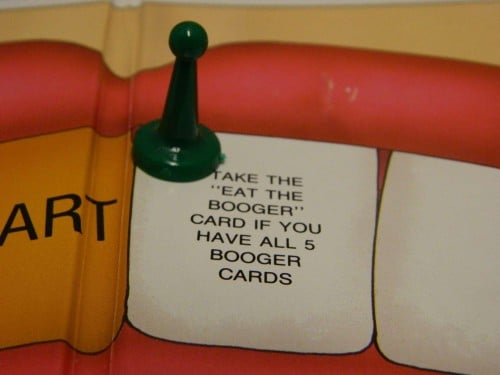 If you own all five different types of boogers and a different player controls the booger when you land on the space, you will win the game. 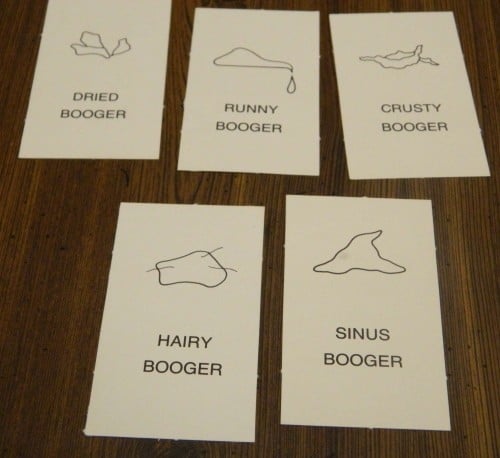 This player currently has all five types of booger cards. If they land on the “Eat the Booger” space and don’t currently control the booger, they would win the game.

Before getting into the details of why Pass the Booger is a terrible game I would like to state that this is an actual board game. This is not a Photoshopped image or an April’s Fool joke. It may look like a joke but Pass the Booger was an actual game that was produced in 1991. It was a locally produced game so I am guessing that there are not a lot of copies produced. The main reason I probably found the game in a thrift store was that it was produced in a neighboring city.

Of all the themes you could make for a game, boogers had to be one of the last choices I would have thought until I ran into this game. I hope this game was made as a joke/gag gift since I don’t know how anyone could have taken this game seriously. As I will get to shortly the theme had no potential for gameplay and it shows. While Pass the Booger has a disgusting theme, the gameplay is almost as bad.

A Disgusting Board Game

After reading just the title I am guessing there will be plenty of people that would find the whole idea behind the game to be disgusting. Sticklers for social norms like not picking your nose will not like this game. Others might find it to be silly and meant to be mindless fun. The theme is pretty inoffensive in my opinion. I don’t think it is a theme that really deserved a board game but I don’t see anything wrong with it either.

While the game is harmless it is still kind of disgusting is some ways. The game revolves entirely around boogers/picking your nose. The objective of the game is to collect different types of boogers after all. Most of the game didn’t really disgust me until you get to the booger itself. The designer(s) had to find a disgusting texture for the booger. Thankfully it is not an actual booger. It is a squishy/gooey substance though and is gross to touch. It is also kind of sticky so it is somewhat hard to get off your fingers. 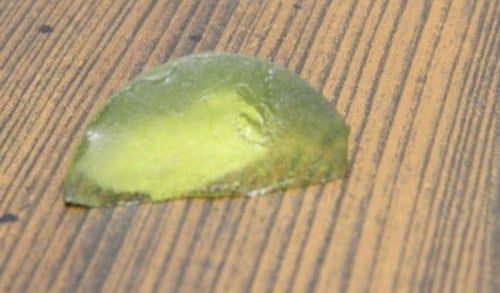 Here is a picture of the booger from the game. The booger is more disgusting in person than this picture could ever show.

While the theme is questionable, the most disgusting part of the game may be the gameplay itself. When I first saw the game I knew it was going to be bad. I mostly picked the game up since it was cheap and so strange that I had to try it out. The game didn’t disappoint since the gameplay is so bad that it is close to being broken.

Each turn you take a card and roll the die to move around the board. Your goal is to get lucky and gather one of each type of booger without landing on an action space that forces you to lose one of your booger cards. The gameplay is as dull as it sounds. The game is really easy to play but it is so boring since all you do is roll a die and draw cards. There is absolutely no strategy in the game since there are only two decisions you can even make in the game. You might get to decide which player to give the booger to and which card to get rid of when you have to discard one. It’s pretty hard to have fun with a game when your actions have next to no impact on the outcome of the game.

Let’s move on to the action cards which do nothing to help the game. There are not enough different types of action cards so you will be constantly drawing the same cards over and over again. I kept drawing the “Pick and Save” card which meant that I was always stuck with the disgusting booger piece. This put me at such a disadvantage since you can’t draw any booger cards until you get rid of it and it is so hard to get rid of it.

The other dumb action card is the “No Snot Now” card. The idea behind the card is not bad since it essentially works as a get out of jail free card. The problem is that everyone knows you have it since it is the only card that you don’t play immediately. If you get one of them you are pretty much immune from the booger for a majority of the game. A player isn’t going to choose to give the booger to you if you have the card since you will just send it back to them. The only way you could ever get stuck with the booger is to draw a card that forces you to take the booger which will force you to play your card. This will make you vulnerable on future turns.

After a few players have collected their fifth booger card, you will encounter possibly the biggest flaw with the game. Since there is only one of each type of booger for all four players, the players that fell behind will easily catch up since every booger card they draw will be one that they need. The first players to collect all five cards may only get a one to two turn advantage. At this point unless someone draws a card forcing them to put back a booger card, all of the players will be competing to be the first player to land on a “Eat The Booger” space. This is anti-climatic and boring since you just sit around waiting for someone to roll the right number. Since there are only a couple “Eat the Booger” spaces on the board, you could end up going around the board several times before someone gets lucky and lands on the right space to end your misery.

If the theme and the game play was not enough to turn you off to the game, lets discuss the game’s components.

As I have already mentioned, the booger piece is disgusting. The game could have easily just used a cardboard token to indicate who had the booger but the designer(s) had to try and find one of the most disgusting materials they could find for it.

Pass the Booger is not a good game. The theme is kind of disgusting but mostly harmless. The booger itself is disgusting though. In addition to the theme, the gameplay is terrible. The game is essentially a roll and move game where you need to collect certain cards. If you get stuck with the booger you are at a significant disadvantage since it is really hard to get rid of and you can’t make any progress until you get rid of it. Due to the broken mechanics the game becomes a race of who gets lucky enough to roll the number needed to land on the “Eat the Booger” space after they have acquired all five different types of boogers.

Despite having a hard time recommending the game to anyone, Pass the Booger is not the worst game I have ever played and that is the sole reason that it didn’t earn a 0. That honor goes to Public Assistance. While the theme is kind of disgusting, it is as least not offensive like Public Assistance. Due to boring broken mechanics I think I can only recommend the game to people that for some reason want a booger game in their collection or want to use the game as a joke gift.