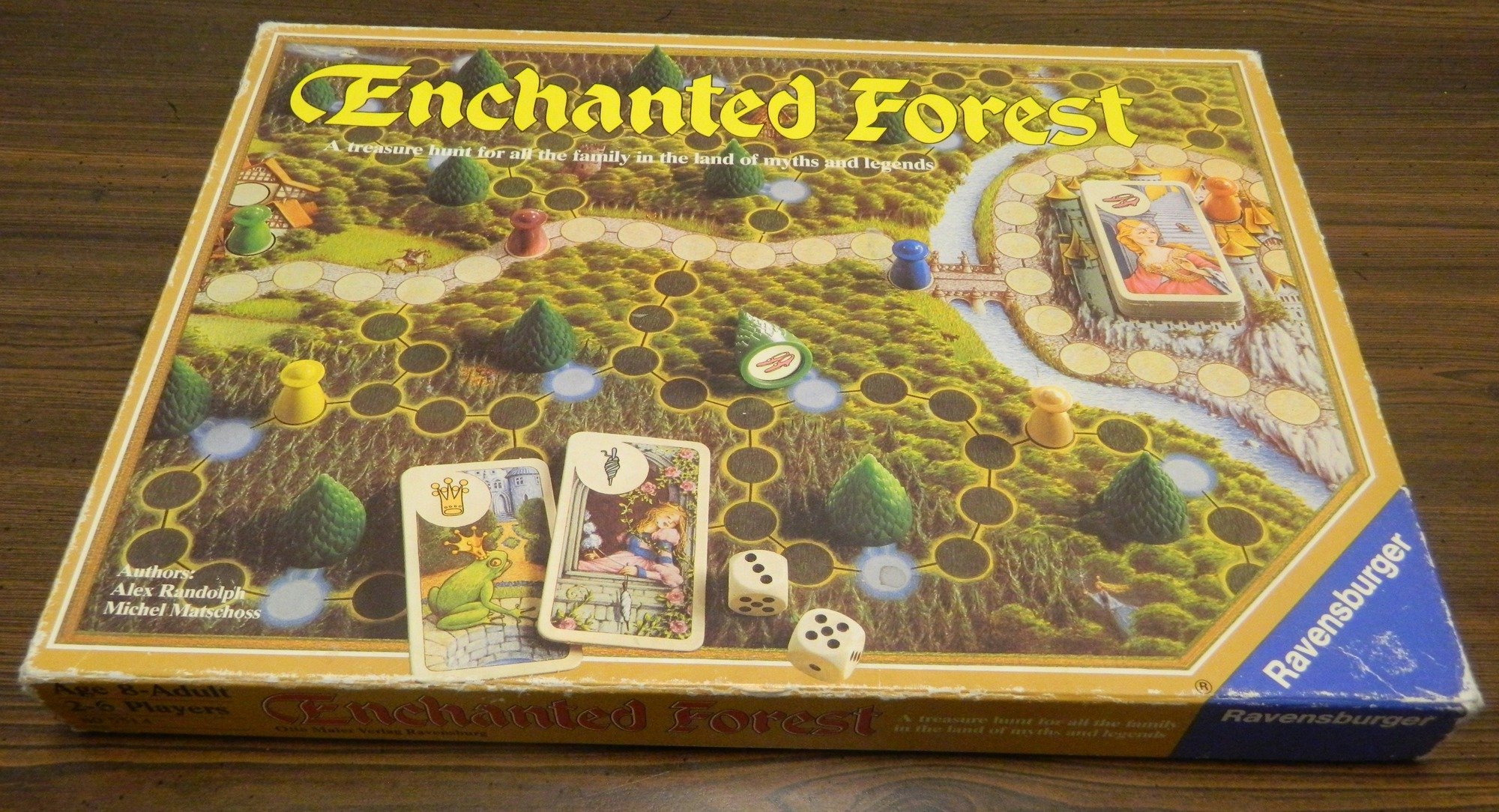 The objective of the Enchanted Forest is to find the objects requested by the King. The face up card on the castle shows what item that the King is looking for. At the beginning of a player’s turn they roll both dice. The player uses both dice separately moving the number of spaces on one die and then the spaces on the other die. While moving a player can move in any direction except that they must move in the same direction for the entirety of each die. A player can move in one direction with one of their dice and in a different direction for the other die they rolled. While moving if a player ever lands on a space occupied by another player by exact count from either dice, that player is sent back to the starting space in the village.

While moving around the board players will land on the blue spaces on the gameboard. By landing on one of these spaces by exact count, the player is able to look under the corresponding tree. The tree is put back onto the space where it was after the player looks at it. Players should keep the identity of the item found secret from the other players. Whenever a player rolls doubles they have a couple choices on how they would like to use the dice:

The first player to acquire three cards wins the game.

Not knowing off the top of my head what board games came out in 1982, due to the fact that I wasn’t alive yet, I can’t necessarily say that the Enchanted Forest didn’t deserve the award but I can confidently say that the game would never have won the award today. It might be a finalist in the Kinderspiel Des Jahres (Children’s Game of the Year), but I don’t think it would win that award either if it was released today. I think that is mostly because while the game did some really interesting things for its’ time, the game feels kind of outdated at this time.

Basically Enchanted Forest is what you would get if you combined a roll and move with a memory game. You roll the dice to move around the gameboard and try to land on the blue spaces to see what is hidden under the trees. You then have to try and remember as many of the items as possible. The game’s memory mechanics are not bad. The roll and move mechanics are better than a lot of games since you can use both dice individually in order to have more choice in how you move your piece around the gameboard. For its’ time period this was probably a pretty innovative mix of genres. The late 1980s and 1990s is when board gaming really started to find its’ grove. Prior to the late 1980s most games were roll and move games that didn’t have a lot of strategy.

Looking at Enchanted Forest you would think that it is a children’s game. The game feels like it was made for children but it can be enjoyed by adults as well. The game is really simple to learn since all there is to the game is remembering the locations of the items and rolling the dice. The game’s theme should appeal to children. Young children should have no trouble playing the game should enjoy it. Young children probably won’t be that good at the game though unless they have a good memory since a good memory is key to winning the game.

Basically success in the game comes down to two things: luck and memory. Like all roll and moves, luck is a driving factor in who wins the game. While being able to use the dice independent of each other reduces some of the luck (a great addition in my opinion), the player who rolls best has the best chance in the game. You could have great memory but if you don’t roll the right numbers you won’t win. You need to roll well to land on the blue spaces as well as the key space. You could know where the current item is located and yet not get the card if another player reaches the key space before you. Another area where luck comes into play is with the item card that is flipped over. Since you have no idea where the items are going to be located you pretty much just need to guess. Some players will end up getting lucky by finding the items that are being asked for right away. This gives that player an advantage over the other players that searched a different section of the forest. While good memory and strategy can help you in the game, luck will regularly decide who ends up winning.

Other than luck, memory plays a big role in who ends up winning the game. Unless you are extremely lucky, you need a good memory to win the game. Basically whoever can remember the most items from the forest has a big advantage in the game. There are essentially two different ways that you can play Enchanted Forest. You could play the game where you look through the trees hoping to find the item that the King wants and then heading to the castle. This strategy doesn’t really work since it tips off the other players to the location of the item that the King is currently looking for.

Your other option is to take a more systematic approach to the game. In this approach you systematically visit all/most of the trees hoping to remember the locations of the different items. If you have a decent memory you should be able to remember at least one side of the forest which will give you an advantage in the game. This means that you will be able correctly guess over half of the cards. Knowing half the forest give you an advantage for items you don’t know since you know that they must be on the other side of the forest. You then either know where to search or you can end up making an educated guess.

This educated guess idea actually kind of ruins the game in some ways. I ended up winning the game because I knew one half of the forest and then made a lucky educated guess. I got two cards because they were cards from the side of the forest that I checked. After getting the second card I was still at the castle so I decided that I might as well guess the location of the next card since I knew it was on the other side of the forest. On my first guess I just so happened to guess the location of the other item. This illustrates a problem with the game in that there is not a large enough punishment for incorrectly guessing the location of an item. Your only punishment is being sent back to the start space which could be seen as a positive if you were headed to that side of the board anyway. The game should have made you lose a turn(s) or possibly lose a card that was already won for each incorrect guess.

While the game has some flaws and doesn’t seem that innovative today, I have to commend the game on doing a good job combining a memory and a roll and move game. Two genres that I didn’t think would work well together actually do and make for a semi enjoyable game. I am generally not a big fan of either genre and yet I thought they worked better together than they do separately. Even though I am not a big fan of memory games, Enchanted Forest is probably one of the better memory games that I have played.

Despite being an older game, it didn’t surprise me that the component quality for Enchanted Forest was quite good. I am always a sucker for interesting Meeple designs and the little adventurer Meeples are a nice addition to the game. The plastic trees are also pretty nice. The cards are made of thick cardboard instead of thin cardstock that most games would have used. To top it all of the game’s artwork is really nice.

If you would like to purchase Enchanted Forest you can purchase it on Amazon, here

4 thoughts on “Enchanted Forest Board Game Review and Rules”