Being one of the most popular video games of all time it is not that surprising that Pac-Man was turned into a board game. What is more surprising is that Pac-Man has actually had four different board games made. Geeky Hobbies has looked at the Pac-Man Card Game and the Ms. Pac-Man Game in the past. There was also a Pac-Man Magnetic Maze Game released in 1982. Today I am looking at the original Pac-Man Board Game released in 1980. While it is the board game that most faithfully recreates the arcade game, it does so in detriment to the game.

Before starting the game place one marble into every hole in the board. Place the four yellow marbles in the orange holes. Each player chooses a Pac-Man playing piece and places it on the corresponding start space. Each player takes the tray of the same color. Place the two ghosts into the center of the board. All of the players roll the dice and the player who rolls highest gets to play first. 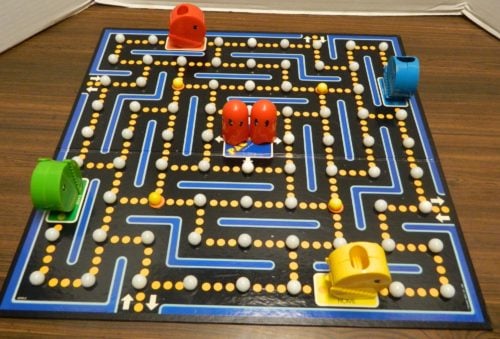 A player begins their turn by rolling the two dice. The player then chooses which die they will use to move their piece and which die will be used to move a ghost. The player can either move their Pac-Man or a ghost first and then will move the other. Each hole in the gameboard counts as a space.

While moving Pac-Man you must use the entire number that you rolled. You can only move in one direction and can’t turn around. You will pick up every marble that your Pac-Man moves over. Pac-Man can’t move through the blue barriers or players/ghosts and can’t land on another player’s safe/home space.If Pac-Man leaves the board off one of the edges, you can enter the board on any of the other entrances that have a white arrow. 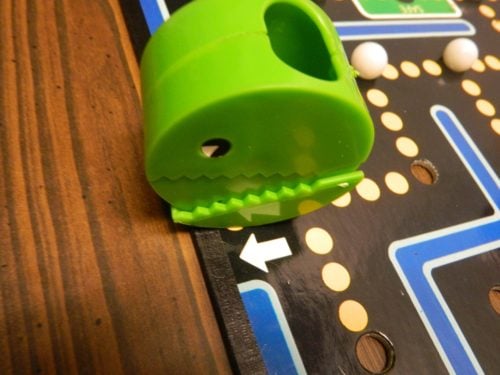 After a player has finished moving their Pac-Man they empty all of the marbles into their tray. 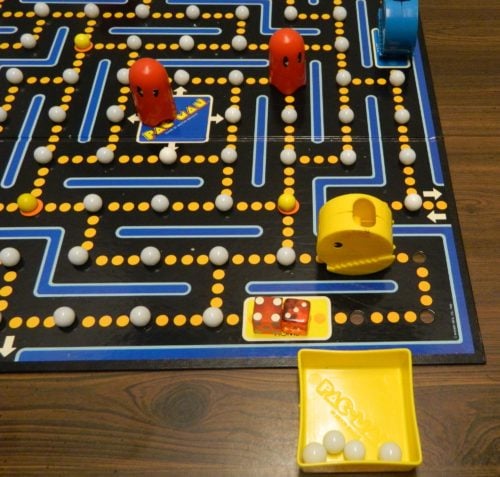 The yellow Pac-Man has moved gobbling up some marbles. At the end of their turn the player empties all their marbles into their tray.

If while moving, Pac-Man gobbles up one of the yellow marbles, Pac-Man acquires the “Ghost Gobbler Privilege”. If you move your Pac-Man onto a space occupied by a ghost you can gobble it up (if you still have spaces remaining they are forfeited). When you gobble the ghost, the ghost is returned to the space in the center of the board. The player who gobbled the ghost gets to take two marbles from another player. The player then returns the yellow marble to one of the orange holes on the gameboard. 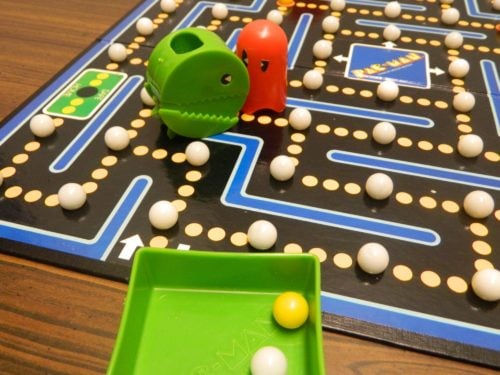 While moving a ghost you are trying to get it to land on another player’s Pac-Man. The ghost has to move the entire number of the die chosen for the ghost but if it lands on a Pac-Man the ghost immediately ends its movement. Ghosts can’t move through the blue barriers, they can’t move through the other ghost or a Pac-Man, and they can’t leave the board and enter at a different place. When a ghost lands on a Pac-Man, the player that controls the Pac-Man has to give two of their marbles to the player who moved the ghost. The Pac-Man is then returned to its safe/home space. 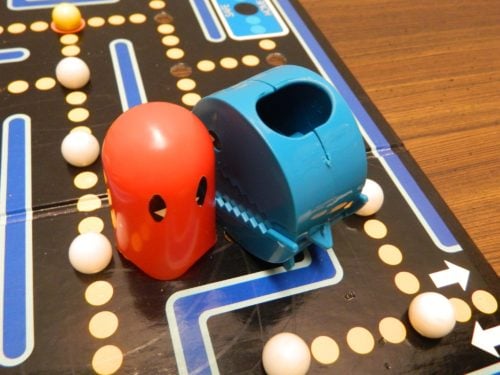 The ghost has been moved to the same space as the blue Pac-Man. The blue Pac-Man player must give two marbles to the player that was controlling the ghost. 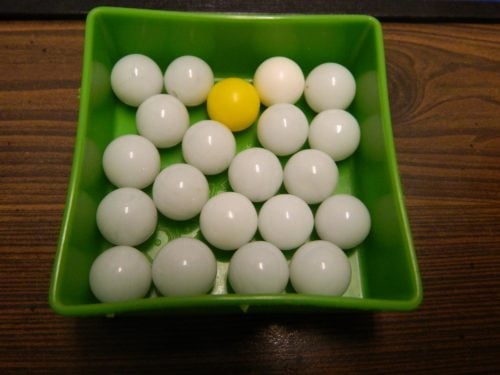 The green player’s score is 20 since the yellow marble does not score any points.

The player with the most white marbles wins the game.

As I already mentioned, the 1980 Pac-Man Board Game is surprisingly representative of the popular arcade game. You move around the gameboard gobbling up pellets and the occasional ghost while trying to avoid getting hit by the ghosts. I honestly don’t know if the board game could be any more accurate since some liberties had to be taken in the transition from a video game to a board game. The problem with trying to recreate the arcade game is that it just doesn’t lead to a very good game.

What is strange about the board game is that there really isn’t anything significantly wrong with the game. There aren’t any terrible or broken rules. The game takes minutes to learn. The game is also pretty short with most games probably taking 10-20 minutes. The components are even quite cute and representative of the arcade game.

The main problem with the Pac-Man Board Game is that it is just so boring. Basically all you do in the game is roll and move. The little strategy in the game is usually so obvious that you pretty much always know what you should do on a given turn. This basically turns the game into an exercise of rolling the dice and moving the pieces. The player who has the most luck rolling the dice is going to win the game.

The one area that could have added some strategy are the ghosts. The problem with the ghosts is that it is really obvious what you should do with them on a given turn. If you have a power pellet you want to get one close enough to your Pac-Man so you can gobble it and take marbles from another player. Usually you are going to want to move them to attack another player. If you roll a three or higher you can usually hit another player with a ghost on any turn. If you can hit another player you obviously should since it will give you mables while taking them away from the other player. If you can hit two Pac-Man pieces with a ghost you attack the one with more marbles so you can gain on the player that is ahead of or closer to you in total marbles. If you can’t get a ghost to any of the other players’ Pac-Man you try to move the ghost as far away from your own Pac-Man piece as possible. With it being so easy to hit the other players with the ghosts it is pretty easy to gang up on the player who is in the lead.

Having played two of the other Pac-Man games, I have to say that the 1980 board game suffers from trying too hard to recreate the arcade game. The other two Pac-man games are not much better than this game but they are a little more enjoyable since they tweaked some of the rules of the arcade game in order to make a better board game. The Ms. Pac-Man game emphasizes the ghosts more and all but one of the players are working together to trap the Ms. Pac-Man player. Meanwhile the Pac-Man card game has little to do with the arcade game and actually is more of a math game than anything else. I really think this Pac-Man board game is a good example of why video games don’t translate well to board games. Since the board game doesn’t really do anything new, you might as well play the arcade game instead of the board game.

I briefly addressed this earlier but probably the best part of the Pac-Man Board Game are the components. If you like Pac-Man I think the game is actually a pretty cool collector’s item even if it is not a very good board game. The Pac-Man playing pieces and ghosts are pretty cool. It is interesting that the pieces actually gobble up the marbles even though they don’t do as good of job as I would have liked causing marbles to roll around on the board. The gameboard and the artwork in general is very reminiscent of the arcade game. I think Pac-Man collectors can appreciate the board game as a collectible even if it isn’t a very good game.

The Pac-Man board game is an interesting board game. There is nothing particularly wrong with the game and yet it just isn’t  fun. The game is so boring. Basically you just roll and move since the little strategy that there is in the game is so obvious most of the time. The ghosts come into play too often making it easy to gang up on the other players. Dice roll luck will almost always determine the ultimate winner of the game. I will compliment the game on its’ playing pieces though since they are actually quite good and will appeal to Pac-Man collectors.

If you really don’t have strong feelings for Pac-Man there really isn’t much for you with the Pac-Man Board Game since it is a very bland roll and move game. If you don’t mind bland roll and move games or are looking for a game that young children can play you can do worse than the Pac-Man Board Game. For the most part though I would only recommend the game to Pac-Man collectors that will appreciate it more as a collectible than a board game.