Place the seven reward posters in a circle in the middle of the table. Place $1,000 on each poster. The cards are shuffled and ten cards are dealt to each player. The rest of the cards form the draw pile with the top card being flipped over to start the discard pile. Each player takes a summary card. The player to the left of the dealer starts the first hand.

After drawing cards, the player has the option of playing cards. In Wyatt Earp there are two different types of cards. On a player’s turn they may only play one sheriff card which has a star along the left side of the card. Each sheriff card has a special effect which is described in the Sheriff Cards section below.

The three cards on the left are a set and since three cards were played $2,000 would be added to the outlaw’s poster. The card on the right can be played but will not add any money to the poster by itself.

After a player has finished playing cards they must discard one of their cards to the discard pile.

End of Hand and Scoring

A hand can end in one of three ways. The most likely situation is when a player discards the last card from their hand. The game also can end when a player plays the last card in their hand on another player’s turn (use of a Wyatt Earp card to prevent a hideout from being played). Finally the game can end if the players go through the entire deck of cards twice without a player running out of cards.

When a hand ends, scoring takes place. Scoring is done for each outlaw poster and follows this process.

After all of the outlaws have been scored, if the players have enough $1,000 tokens they cash them in for $5,000 tokens. Players count up how much money they have. If a player has at least $25,000, the game ends. The player with the most money wins the game. 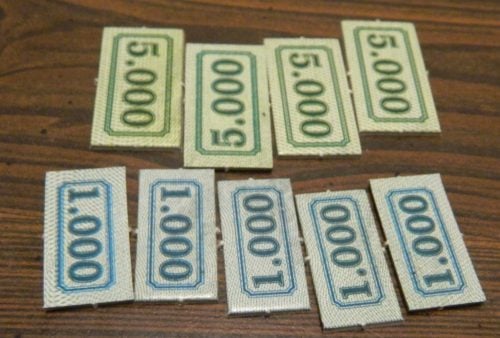 If no player has more than $25,000, a new hand is played. The player to the left of the previous dealer becomes the new dealer and they deal ten cards to each player. $1,000 is added to each poster even if there is money already on the poster.

Other than the outlaw cards, there are several sheriff cards that have special effects which are as follows: 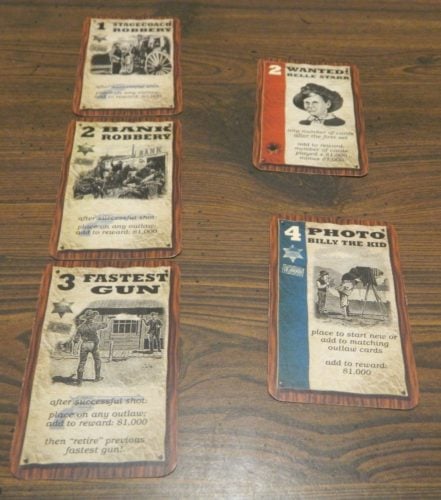 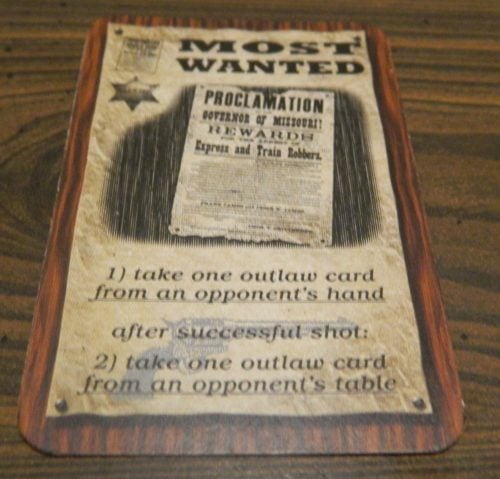 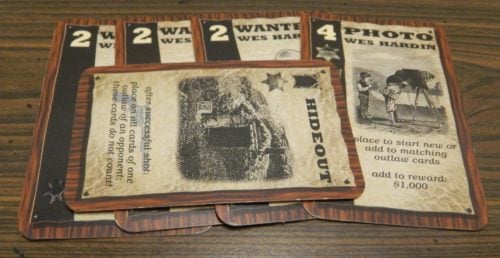 Hideout: When a player plays a hideout card they need to draw a bullet hole card from the draw pile in order for its’ effect to activate. When a bullet hole card is drawn the player chooses another player to play the card against. The card is played against all of the cards of one outlaw played by that player. Those cards no longer add any CP to an outlaw and won’t impact scoring at the end of a round. The hideout stays in place until a Wyatt Earp card is played to remove it (see next paragraph). 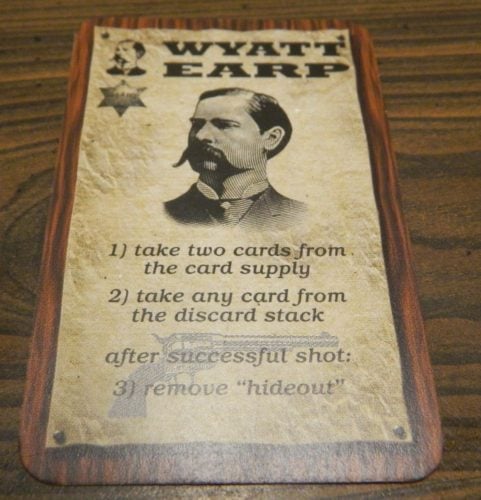 While Wyatt Earp and Mystery Rummy: Jack the Ripper are both games based off of Rummy and thus share quite a few mechanics, the two games actually feel quite a bit differently. In Mystery Rummy: Jack the Ripper you are playing cards for points as you try to impact who becomes Jack the Ripper. You also might want to get all of the suspect cards played so you can play the Ripper Escapes card and win the hand. In Wyatt Earp you are mostly focused on trying to stay in position to receive rewards from as many outlaws as possible while also trying to squeeze other players out from receiving part of the reward money.

Being a card game there is obviously a lot of luck in Wyatt Earp. If you draw the right cards you have a better chance at winning after all. What I like about Wyatt Earp is that you can make moves no matter what cards you get that can help you earn reward money. While the mechanics are pretty simple there is a surprising amount of strategy in maintaining your position with all of the outlaws. Good card play may not win you the game but it will improve your odds.

Trying to maintain control over the different outlaws is the area I enjoyed most in Wyatt Earp. A lot of the sheriff cards can be played to change who has the majority for a particular outlaw. Getting a majority for a outlaw guarantees you the most money from that outlaw but it is even better to be able to take all of the reward for a given outlaw. This back and forth of trying to stay in the running for a reward while trying to take all of the reward for a different outlaw is where Wyatt Earp shines.

While I really enjoyed Wyatt Earp, the biggest problem I had with the game is that it is a little on the long side. The game will probably speed up the more you play it but for your first couple of games it takes longer than it should. The game has a suggested length of 45 minutes to an hour but at least for your first couple of games I think it will be closer to 90 minutes unless one player gets quite lucky. If you have a lot of players who suffer from analysis paralysis the game can kind of overstay its welcome.

Like all Rio Grande Games, the components for Wyatt Earp are quite good. The game’s artwork in particular is fantastic. The artwork really adds to the game’s theme.The cards are laid out well since you can always find the information you need. The text on the cards could be a little bigger though since it is quite hard to read at times. Once you are familiar with the game it is not that big of an issue but it can be an issue for people who have never played the game before. The cardboard pieces are quite good since they are made of thick sturdy cardboard.

Overall I enjoyed my time with Wyatt Earp. While the core of the game is a basic set collection game, the new mechanics add enough to the game to reduce some of the luck while adding some interesting strategy to the game. I really liked the mechanic of trying to maintain a majority in different outlaws while trying to wedge out other players so you don’t have to share the reward with them. I also like the mechanics of drawing bullet hole cards. The only complaints I really had with the game are that the photo cards are a little overpowered and the game takes longer than it probably should.