In the 1980s and 1990s Milton Bradley tried to branch out in the children’s market by designing some new children’s board games featuring mechanics that really hadn’t been used in other games. While some of these games were successful, most of them never sold well and were quickly forgotten. Over time some of them have developed a cult following but most of them were forgotten for good reasons. Today’s game Don’t Get Rattled was one of these 1990s children’s games that never really caught on. Is Don’t Get Rattled one of the cult classics or just another dud that will be forgotten to time? Unfortunately Don’t Get Rattled falls into the later category.

How to Play Don’t Get Rattled!

Remove the cover from the gold chest and put all of the gold pieces inside. Place the pickax into the hole to the right of the gold chest. Wind up the snake by pulling on the lever on the side and pull back the snake’s head. Choose which player will play first.

A player begins their turn by pulling the pickax out of the hole to the side of the gold chest. This activates the snake. The player uses the pickax to remove one piece of gold from the chest. If the player removes two pieces of gold, they must put one of the gold pieces back into the chest (using the pick ax). 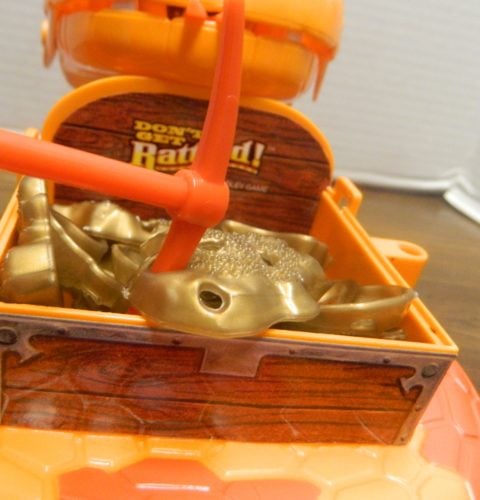 On this player’s turn they need to grab one of the pieces of gold with the pickax and remove it from the chest.

Once they have removed a piece of gold they place the pickax back into the hole stopping the snake. If the snake has not popped up the player gets to keep the gold and the next player will take their turn. 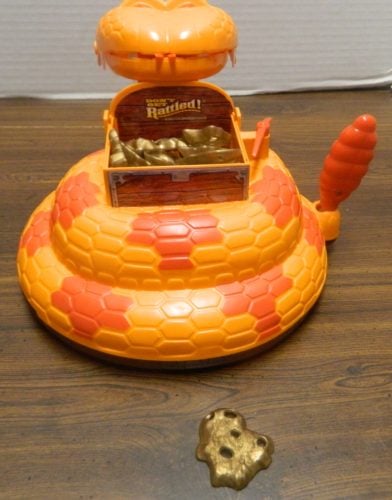 This player has successfully ended their turn by grabbing a piece of gold and placing the pickax in the hole on the side of the chest.

While playing the game the snake will pop up its’ head under two circumstances:

When the snake’s head pops up, the current player’s turn ends immediately. If the player had removed a piece of gold during this turn, they must put the gold back into the chest. The pickax is put into the hole and the snake is fully wound up. Play passes to the next player. 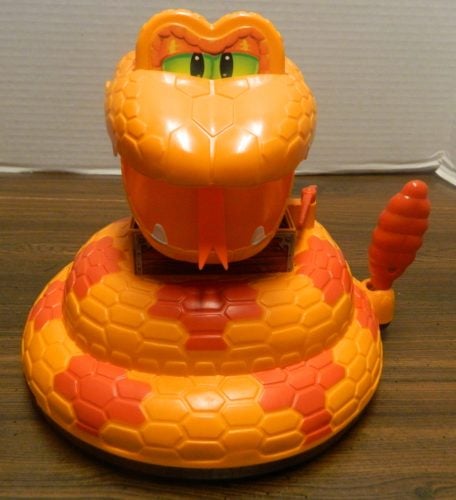 The current player has triggered the snake. This player loses their turn and the gold piece if they had already grabbed one this round.

The game ends when all of the gold pieces have been removed from the chest. Players count up how much gold they have acquired. The player with the most gold wins the game. If there is a tie the tied players play another round to determine the winner.

My Thoughts on Don’t Get Rattled!

While I don’t have the evidence to back this up, I have a strong feeling about why Don’t Get Rattled! was never successful. When you are trying to make a board game for young children it is probably not a good idea to make a board game that will terrify them. With a lot of people being afraid of snakes, I really question why Milton Bradley thought it was a good idea to make a children’s board game that features a snake that jumps out at you. While the snake is cartoony I really want to know why people thought this game wasn’t going to scare children. If I would have played this game as a child I probably would have been terrified by it. Even though the game is not scary for adults it can still be kind of startling when the snake unexpectedly jumps out at you.

I think the subject matter of Don’t Get Rattled! is the reason that the game didn’t do well but I think the gameplay is the worst part of the game. The problem is that there is very little actual gameplay in Don’t Get Rattled. Basically you use the pickax as quickly as possible to get a piece of gold without pressing too hard on the chest. Since you can easily hook a piece of gold with one of the holes in the gold, the game requires very little dexterity. Your only two real concerns in the game are pressing down too hard or running out of time. At least in my experience if you use any care in taking out the gold you shouldn’t have much trouble avoiding setting off the snake by pressing down too hard.

This basically means that you will usually trigger the snake due to running out of time. For the most part the timer is out of your control. If you get the full length of the timer, you shouldn’t have any trouble getting a piece of gold. Usually you will get caught when a player leaves next to no time on the timer for your turn. In this situation you basically have no chance of getting a piece of gold due to no fault of your own. If you wanted to be a jerk you actually might want to waste a bunch of time before putting in the pickax and ending your turn. This would severely limit how much time the next player would have to get a piece of gold and would make it hard for them to grab a piece in time. I hate it when games punish players due to no fault of their own. The winner of Don’t Get Rattled basically comes down to which player gets the most time for their turn. If you don’t like games that rely heavily on luck, Don’t Get Rattled! is not going to be for you.

With these problems with the gameplay, Don’t Get Rattled is just not very fun for adults. The gameplay is dull and relies way too much on luck. The game was designed for younger children and I would guess that they would enjoy the gameplay more than an adult. This brings me back to the problem of the snake jumping out at you though. While children could enjoy the game, I think it would actually scare a lot of the target audience. Don’t Get Rattled! tried to do something new for a children’s game but it just doesn’t work

While Don’t Get Rattled! is not a good game, it does actually deserve a lot of credit for the design of the mechanical components. Don’t Get Rattled! surprisingly uses no batteries. Without using any batteries the game has a timer, detects when too much pressure is put onto the chest, and even has a rattling tail. I found it impressive that the game found a way to make all of the different components work without using any batteries. While the game itself is not good at least the construction of the game is impressive.

Should You Buy Don’t Get Rattled!?

I honestly question why Don’t Get Rattled! was ever made. Who thought it was a good idea to make a children’s game where a snake jumps out at you? While children may find the gameplay to be fun, I see the game terrifying a lot of children. With the game mostly being made for children it ends up being really dull for adults. As long as you are decent at dexterity games, your only issues in the game will come from the timer. This means that luck is going to play a big role in who ultimately wins the game. While Don’t Get Rattled! is a pretty bad game I do have to give the designers credit for creating a mechanical game that works surprisingly well without using any batteries.

If you would like to purchase Don’t Get Rattled you can find it online: Amazon