How to Play Fluxx

Fluxx is a unique card game that is always changing.

The game consists of four different types of cards.

Players continue playing until one player matches the goal objective in its’ entirety. The player wins immediately whenever they meet all of the requirements even if it occurs during the middle of another player’s turn. 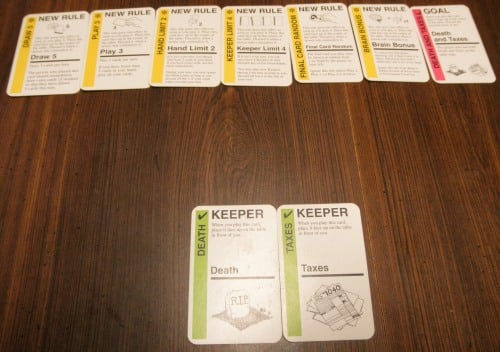 In the following scenario the following rules are in place. At the beginning of each turn each player must draw five cards. During their turn each player has to play exactly three cards. At the end of their turn, players may only have two cards in their hand. At the end of their turn each player may only have 4 keeper cards in front of them. The third card played by each player will be randomly picked by the player to their left. Finally if one player has the brain in front of them, their hand size can be three instead of the hand limit of two. The current goal is to have the Death and Taxes keepers. The current player at the bottom has Death and Taxes so they would win the game.

My Thoughts on Fluxx

As you can see from the similar games on the sidebar, Fluxx has had many versions through the years. For this review I am going to be talking specifically about Fluxx Version 2.1 and Fluxx the game in general. In addition to Fluxx 2.1 I have also played Zombie Fluxx. Of the two I prefer the basic game. I like the Zombie mechanic in Zombie Fluxx but I prefer the greater variety in rules and goals that are present in Fluxx 2.1.

Fluxx’s greatest strength is its’ creativity/wackiness. As far as I know there are no other games where the rules and objectives change on the fly. You would think that this would create chaos which it does and doesn’t at the same time. The constantly changing rules and goals create chaos in that you have to always be alert to what will happen next. You have to be willing to change your strategy on a seconds notice. Despite the rules always changing, Fluxx is not that complicated to play. The rules are simple and are well written on the cards so you should always know what is going on.

Overall I wouldn’t consider Fluxx to be a very hard game but it is not for everyone. In order to play Fluxx, there is a decent amount of reading required in order to fully understand what each card does but the cards are well written so there aren’t issues with players debating what a card does or does not do. Players then need to figure out how the cards will affect the game in order to make sure that they don’t play a card that will let one of the other players win. While you can definitely relax and have fun playing Fluxx you need to pay enough attention in order to play somewhat successfully. I somewhat question the recommended age of eight. There is nothing in the game inappropriate for children but some children may have trouble with keeping up with the game and understanding all of the changing rules. I think the recommended age maybe should have been ten or so. Due to the always changing rules some people that will not enjoy the game. People who don’t like card games especially card games that require quite a bit of reading and interpretation will most likely not enjoy the game.

Most of the rule changes are pretty simple, but they can make a huge difference on the game. The drawing, playing, hand limit, and keeper limit rule cards all can be used strategically. For example in one game I played I was using a keeper limit rule to keep the number of keepers for the other players down. I had the goal card in which the player that had the most keeper cards in front of them would win. Since everyone was stuck with only having three keepers in front of them, I was hoping to get two additional keepers in my hand and be able to play them with the goal card which would have lead to a victory. Unfortunately I didn’t end up winning due to another player getting a lucky draw, but the rule changes can really affect the game and lead to some interesting strategies.

The one rule card I wished would have been played in a game would have been the random final card. With this rule the last card you play on your turn would be randomly selected by one of the other players. I can’t imagine how much havoc that would have thrown into the game. I could just imagine that card leading to a player being forced to play a card that would let someone else win.

In addition to the rule cards, some of the goal cards are quite unique. Most of the goal cards are the typical having to have two different keepers in front of you. Some of the more unique goal cards include having the most cards (with at least ten cards) or having the most keepers (with at least five). The game could have used more of these unique goals and focussed a little less on just having certain keepers in front of you.

Overall the quality of the contents is solid. The card stock is not super thick but the cards are still sturdy. If you take good care of the cards they should last for a long time. The artwork of the cards is solid. The design of cards make it easy to figure out what each card does. I wish the artwork would have reinforced the wackiness of the game a little more though.

The biggest problem with Fluxx is that it relies very heavily on luck. You will win some games based on strategy but based on my experience at least half of the games are won totally based on luck. If you insist on strategy in your games and hate when luck interferes with the outcome, you will not like Fluxx. In the two games I recently played, both were won by pure luck. The first game ended when without any prior knowledge, I changed a rule forcing all players to play three cards on their turn. The next player only had three cards left, one being the goal card that I needed to win. So that player was forced to play all three cards and I ended up winning. The other game there was a swap of keeper cards and one of the players ended up with both keepers they needed to meet a goal that they had in their hand.

In most games this reliance on luck would drive me nuts. In Fluxx it doesn’t though since the whole point of Fluxx is its’ wackiness. The wacky random endings to the game just add character. Even though I am okay with the luck aspect of Fluxx, I still wish the game did rely a little less on luck.

Should You Buy Fluxx?

I really like Fluxx. It is not a perfect game and it relies too heavily on luck, but it is just a fun game. The game is wacky and can change in a moment. If this game sounds interesting to you, I believe you should enjoy the game. If you are not a fan of card games or would like a game with more permanent rules and objectives you might be better off looking for a different game. I know Fluxx will be staying in my collection.