As one of the most popular abstract games of all time, it is not that surprising that there are quite a few Checkers variant games. In the past we have looked at Checkers4 and King ‘O Kings. As a whole I wouldn’t say that I have a strong opinion on Checkers. The game is fun and I will play an occasional game but there are a lot of board games that I prefer over Checkers. I was intrigued by King’s Court though since it has some interesting tweaks to Checkers. While King’s Court doesn’t revolutionize Checkers, it is probably the best Checkers variant that I have ever played.

How to Play King’s Court 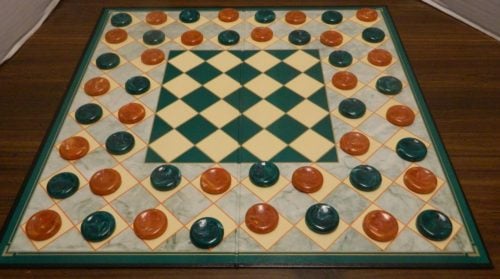 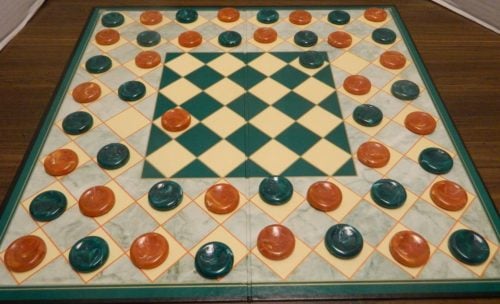 Both players have made their first move moving one of their pieces into the center section on opposite sides of the board.

After each player’s first move, players can move any piece they want. Players can move one of their pieces to any unoccupied adjacent beige square above, below, to the left or to the right. Players can move pieces out of the center section as long as they have another piece in the middle of the board.

After the first two moves of the game, players can also choose to jump over pieces. A player can jump any adjacent piece as long as the beige space on the other side of the piece is unoccupied. A player may jump over their own piece or an opponent’s. If a player jumps over an opponent’s piece they remove that piece from the board. 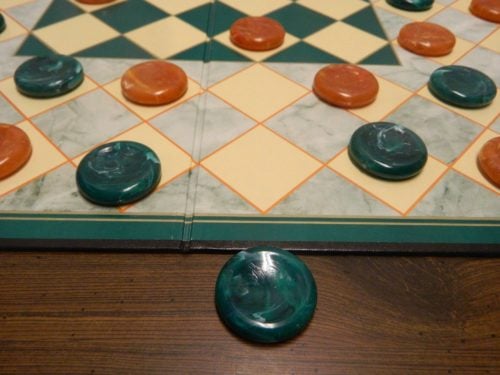 A player can jump as many pieces as possible on a turn as long as there is an unoccupied space between each piece. While jumping multiple pieces a player can change directions as many times as they want. 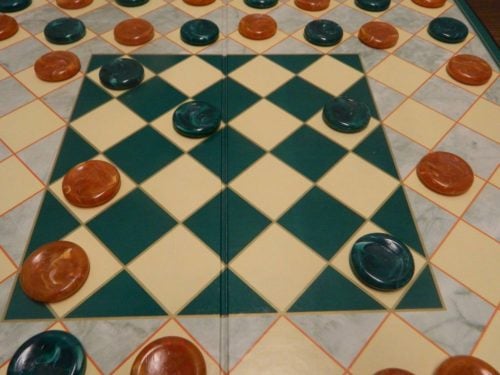 The game ends when one of the players has no pieces remaining in the center section. The other player wins the game. 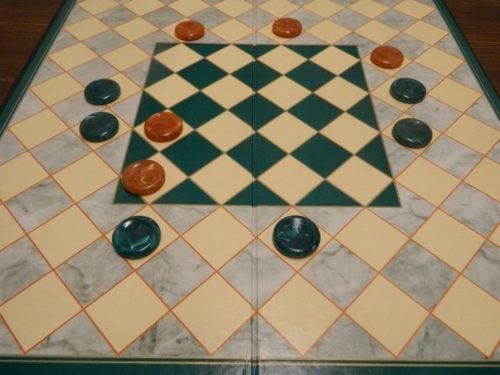 The green player no longer has pieces in the center square of the board. The orange player has won the game.

My Thoughts on King’s Court

When I look at King’s Court I basically see Checkers with a couple tweaks. The basic premise and mechanics of King’s Court are exactly the same as Checkers. Movement is exactly the same as Checkers except that all of the pieces start as Kings and can move in any direction. The goal of the game is to use your pieces to jump over your opponent’s pieces removing them from the board. As the two games are so similar, your opinion of Checkers will likely apply to King’s Court as well. As I am assuming everyone has played Checkers at some point in their lives, I am not going to really address the basic gameplay mechanics of the game. Instead lets look at how King’s Court plays differently than Checkers.

The biggest difference between King’s Court and Checkers is the pace of the game. In Checkers the pace can be pretty slow. Unless players are aggressive, it will usually take several turns before any pieces are jumped. That can’t be said for King’s Court though. As soon as players are able to jump each other, the carnage begins. I attribute this to the board being set up where it is really easy to jump each other at the beginning of the game. For five or six turns, players will be constantly jumping over each other. At the end of those five or six turns both players will likely have lost over half of their pieces.

This might be what I enjoyed most about King’s Court. Unlike Checkers players don’t sit back waiting for the other player to make a move. King’s Court is a much more aggressive game. If you play passive you are going to lose the game. In Checkers you are lucky to get a double or triple jump. In King’s Court it is not impossible to jump five or more pieces in one turn. With so many jumping opportunities King’s Court is more exciting than Checkers.

After all of the carnage at the beginning of the game, the pace of King’s Court changes pretty drastically. As there are less pieces on the board, it is harder to set up opportunities to jump the other player’s pieces. This is the point where Checkers really starts to drag for me. The problem with Checkers is that when there aren’t a lot of pieces on the board it is pretty easy for players to avoid one another if they want to.

While I think King’s Court has a little more strategy than Checkers, I think it can also lead to more analysis paralysis problems. I think three things add to the potential analysis paralysis problems in the game. With a larger board and more pieces to start the game, there are more potential moves every turn. I think the ability to jump over your own pieces has the biggest impact on analysis paralysis though. Being able to jump over your own pieces gives you a lot of movement options in the game. Having two pieces next to each other can be used as a defensive strategy but it can also be used offensively.

The main reason that analysis paralysis can become a problem is that one mistake can lose the game for a player. There are a lot of potential moves that can be made on a given turn. If you make the right move you can really help yourself. If you make the wrong move though you can lose a lot of pieces which will make it hard to ever catch up. This can lead to analysis paralysis since really competitive players will have to analyze every move to avoid making a move that will lead them to losing a lot of pieces. If the players aren’t that competitive this isn’t that big of problem. For competitive players though you might need to consider adding a time limit to each turn..

As far as the components I would say they are solid but unspectacular. The board is pretty generic but the playing pieces are pretty solid. The game isn’t much to look at but it serves its’ purpose. The biggest problem I have with the components is that King’s Court is a game where it would be quite easy to make your own copy. Basically you just need an 8X8 board that you can tilt sideways. You also need some way to mark off a 4X4 grid in the middle. Find 24 markers of two colors and you have everything you need to play the game. King’s Court will look nicer than a makeshift board but with King’s Court being more valuable than you would think, you might be better off making your own board.

Should You Buy King’s Court?

If you would like to purchase King’s Court you can find it online: Amazon

This review really misses the mark. I hate the game of checkers and love the game King's Court. I don't think they are all that similar. This game reviewer has not bothered to offer anything other than their personal opinion when they could have done some research and tried to gather other opinions to present in this review.

As you can see, the game gets solid reviews anywhere you look. It's unfortunate that it isn't made anymore.

While I agree with your opinion more than you might think, I still stick with the fact that King's Court is very similar to Checkers in my opinion. Most of the gameplay mechanics are the same as normal Checkers. The only real difference between the two games is that King's Court also has the centerboard. While the actual mechanics of the game aren't much different, this center board does change the strategy quite a bit. Instead of players being able to play passively, the center board forces players to play a little more aggressive than they otherwise might.

While I only gave the game a 3 out of 5, I don't think it is a bad game by any stretch. As this is my review of the game, it is my personal opinion of the game and some people are obviously going to disagree with that and their opinion is as valid as mine. I personally see a three out of five as a solid game that people who are intrigued by the concept should enjoy. It honestly is an improvement over Checkers in my opinion. I personally am not a huge fan of the main Checkers gameplay mechanic or abstract strategy games in general, so that brought down the game some in my opinion. I still preferred it over Checkers though and I don't see the point in playing Checkers as King's Court is similar enough and a better game in my opinion.

As for why the game has never been reprinted I am not really sure. King's Court is a game that a lot of people seem to really enjoy as you can see by the comments at the end of this review. Other people have made the same comment about wishing it was still in print and I agree with them. As Chas left in a comment apparently the rights to the game were purchased by Hasbro and they decided not to keep publishing the game. I am guessing it is because they either didn't like the initial sales of the game, or they didn't think there would be enough interest in the game. Because of the limited copies of the game that were created, the game is pretty expensive to purchase online as most copies seem to sell for at least $40-50. Because of this people have found ways of creating their own versions of the board as the game basically consists of the board and checkers so it shouldn't be too difficult to make your own version of the game. Apparently you can also use an Othello board to play the game as it has the exact same number of squares. Obviously the board will look different, but you could play the game without altering the rules in any meaningful way.

I have this game, my kids grew up playing. Now my daughter wants me to make one for her. If I make the game, which is no longer in production, will there be a problem with copyright laws?

I will preface this by saying that I am not a lawyer so this is not a legal opinion. In my opinion I think your question is in a gray area. It probably technically breaks copyright law, but I don't think you would get in any trouble for it.

Copyright usually deals with selling things commercially so if you make a copy for your daughter and you don't charge her for it, you will probably be fine. Even if that would be violating copyright laws, I wouldn't worry too much about it. The game hasn't been released in around 30 years so I don't think Western Publishing Company or Golden are actively enforcing their copyright on the game. If you only make one copy of the game and don't sell it for money I don't see their lawyers suing you for violating the copyright on the game. If you were to make several copies of the game and start selling them for money though, I could see you getting in some trouble as this is for sure a violation of copyright law.

As I said though I am not a lawyer so this is just my opinion.

Made by Golden from 1987-89 then purchased by Hasbro who did not continue production. 250,000 we're sold. Only available on eBay,, Amazon etc. when available from $30-100. Excellent game of strategy.