One of the first board games that most people are exposed to is the “classic” game of Checkers. Known under many different names around the world, I am guessing most people have played some version of Checkers at some point in their lives. The game is usually introduced to children since the game is easy to play and since most people have played the game at some point it is easy to pick up and play the game. When I was a kid I actually remember playing Checkers quite a bit but I haven’t played the game in many years. I just really haven’t had a reason to play Checkers since I was a child. When I came across Checkers4 (basically four player Checkers) though I decided to give the game a chance since I thought the extra two players could make Checkers more interesting. The additional two players do make Checkers4 more interesting but at the same time introduce their own problems.

How to Play Checkers4

To save time, Checkers4 is basically four player checkers with one tweak. Before beginning the game the players need to decide whether a piece becomes a king if it reaches any edge of the board or just the opposite edge of the board. Otherwise if you know how to play checkers you can skip the rest of the how to play section since it follows the same rules as a normal game of Checkers.

To set up the board each player places their colored checkers on the black spaces on their side of the board. The player that is using the black checker pieces plays first followed by the player to their left. 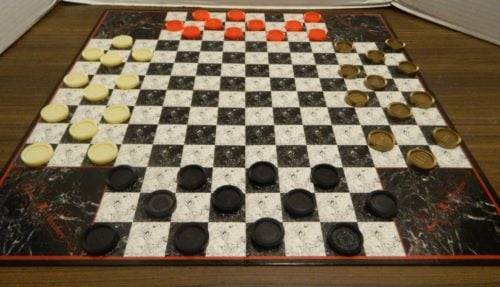 On a player’s turn they will move one of their pieces diagonally to an adjacent unoccupied black space. At the beginning of the game all of the pieces can only move in a forward direction. Once a piece has been made a king it can move forward or backwards. 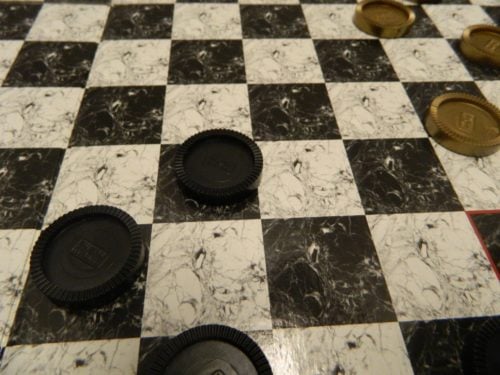 The black player has moved one of their pieces forward one space. 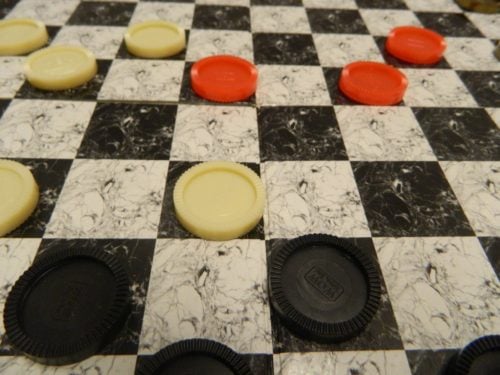 When a piece reaches the opposite edge of the board or any edge of the board (depending on what the players choose at the beginning of the game), their piece is made into a king by having a second checker placed on top of it. Once a piece is turned into a king it can move forward and backwards on the gameboard. 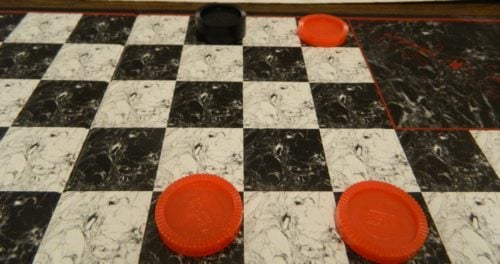 One of the black pieces has reached the other side of the gameboard. The black piece will be turned into a king.

A player wins the game if they are able to eliminate all of the other player’s pieces and be the last player standing. 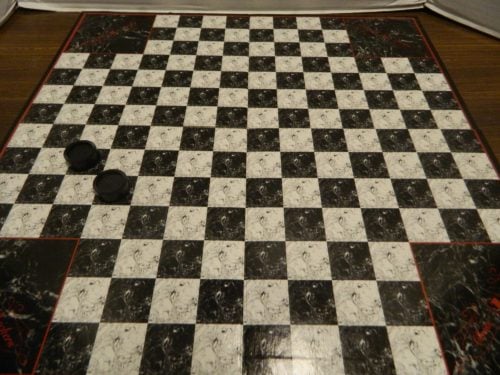 The game can end in a tie/draw if the players keep repeating the same moves or too many turns pass with no pieces being jumped or turned into kings.

My Thoughts on Checkers4

While I could probably end the review right now, I am going to talk about a couple of the unique things that come up playing Checkers with four players. Before continuing I will admit that I slightly misplayed Checkers4 so some of the comments I am about to make might need a little tweaking. Due to the game not actually including instructions on how to play normal Checkers and the fact that I hadn’t played the game since I was a child, I didn’t know about the rule where you are forced to jump pieces when possible. When playing the game as a kid I remember playing the game where players are allowed to choose whether they wanted to jump a piece.

Before playing Checkers4 you need to make a decision on whether pieces will be made into kings if they reach any edge or only if they reach the opposite edge. There is actually valid reasons to choose both options. Our group decided to stick with having to reach the opposite edge since we felt it would be too easy to king pieces otherwise. Even though we didn’t use the other rule, after playing the game I know that it would be much easier to get kings with it and kings would become much more important in the game.

While we chose to use the opposite side rule, there are two obvious and one unexpected benefit to using the sides rule though. First the game should be quicker since you will get kings quicker which should make it easier to jump other players’ pieces. Second it should help with the logjam that is created in the middle of the board since using the opposite side rule can lead to a large logjam in the middle of the board. The unintended benefit is that you can actually break the game using the opposite side rule. It is actually possible to move a piece into the corner of one of the edges to your left and right where it can’t be jumped or move itself. This actually happened in the game that I played. For these reasons I would probably recommend playing with side rules.

For the most part Checkers has always been a two player game so you might be wondering how it plays as a four player game. I would say that four player Checkers is probably more strategic than normal Checkers. Since you now have to focus on three other players instead of one, you need to consider your moves more carefully since there will be three moves before each of your moves. Having three other players is also interesting since you can use other players to help you with your strategy. Two players could end up wedging in one player limiting their moves. You could also take advantage of multiple players’ pieces to jump several times on your turn.

While adding more players adds strategy, it adds more luck as well. The good thing about Checkers as a two player game is that you have a lot of control over your fate since just you and the other player are making moves. Any mistake you make is your fault. The problem with four player Checkers is that your fate depends a lot more on what the other players end up doing. If all of the players are equally skilled this shouldn’t be a big issue but if one player is worse than the other players this can become a pretty big issue.

The problem is that the player to your left and right are key to your success in the game. Therefore if the player across from you is not as good at Checkers as all of the other players, you will be at a disadvantage in the game. First it will be much easier for the other two players to get kings since they can take advantage of the weaker player. Second the player to your left and right could start boxing you in if they don’t have to defend the player on their other side as much.

Even if all of the players are of an equal skill, there are still issues with luck in the game. First as I mentioned before you don’t have as much control over the board. Instead of making every other move, you make a move every four moves. Your strategies in the game will always be in flux since the board could change quite a bit before your next turn. Second a mistake by one player could easily mess up your strategy. For example a player could make a bad move that gets them and you jumped. In this situation you did nothing wrong but still suffer the consequences of another player’s mistake. While it is interesting playing Checkers with more players, you do sacrifice some of your control over the game.

I think the biggest problem with Checkers4 and Checkers in general though is the fact that the game has a significant stalemate problem. While I attribute part of the problem to the fact that all of the players in my game are cautious players, I still think the stalemate problem is an issue with the game. In the game I played three of the players basically created a wedge shape with their pieces and moved the wedge as a group towards the center of the board basically running into each other in the center of the board. At this point no one wanted to move any of these pieces since they would then lose one or more of their pieces and a chain reaction could go off. While this probably would have played slightly different if players were forced to jump pieces, I still think the middle of the board will become congested quickly and if all of the players are stubborn nothing will happen.

The problem worsens when the players get Kings since then they can just ignore moving their other pieces once all of their pieces are in a formation that can’t be jumped. The players will then just move their Kings and no player will make any progress towards winning the game. Generally in Checkers ties/draws are declared if one player ends up making the same move multiple times or if a given number of moves have been made between a piece being jumped or made into a king. Basically our group decided to end the game in a draw since once all of the players got a King there was no reason for them to move any of their other pieces since they would just get jumped immediately. Kind of an anticlimactic ending in my opinion.

Checkers4 was made by WOW Toys Inc. If you have never heard of that company before it is not surprising since the company only made six games in its’ entire history according to Board Game Geek with half of those games being attempts to turn two player games into four player games. When you look at Checkers4 you probably aren’t going to expect a whole lot out of the contents. You won’t be disappointed either. All you get is a cheap board and checkers. The gameboard’s artwork is kind of ugly as it was trying to look like it was made of marble and fails. The checkers are really cheap plastic and basically what you would expect out of a cheap Checkers game. When it was first released I assume Checkers4 was a pretty cheap game and it shows in the quality of the components.

Should You Buy Checkers4?

For the most part Checkers4 plays exactly like normal Checkers. You move and jump pieces to see who is the last player standing. Just like with normal Checkers, Checkers4 seems to have a stalemate problem. While Checkers4 has the same rules as normal Checkers, the two games do play differently. Having two additional players will force you to tweak your Checkers strategy and could add more strategy since there are more players and pieces that you have to keep track of. The problem with having four players though is that you lose quite a bit of control over your fate in the game since another player’s move could easily mess with your strategy.

If you would like to purchase Checkers4 you can find it online: Amazon