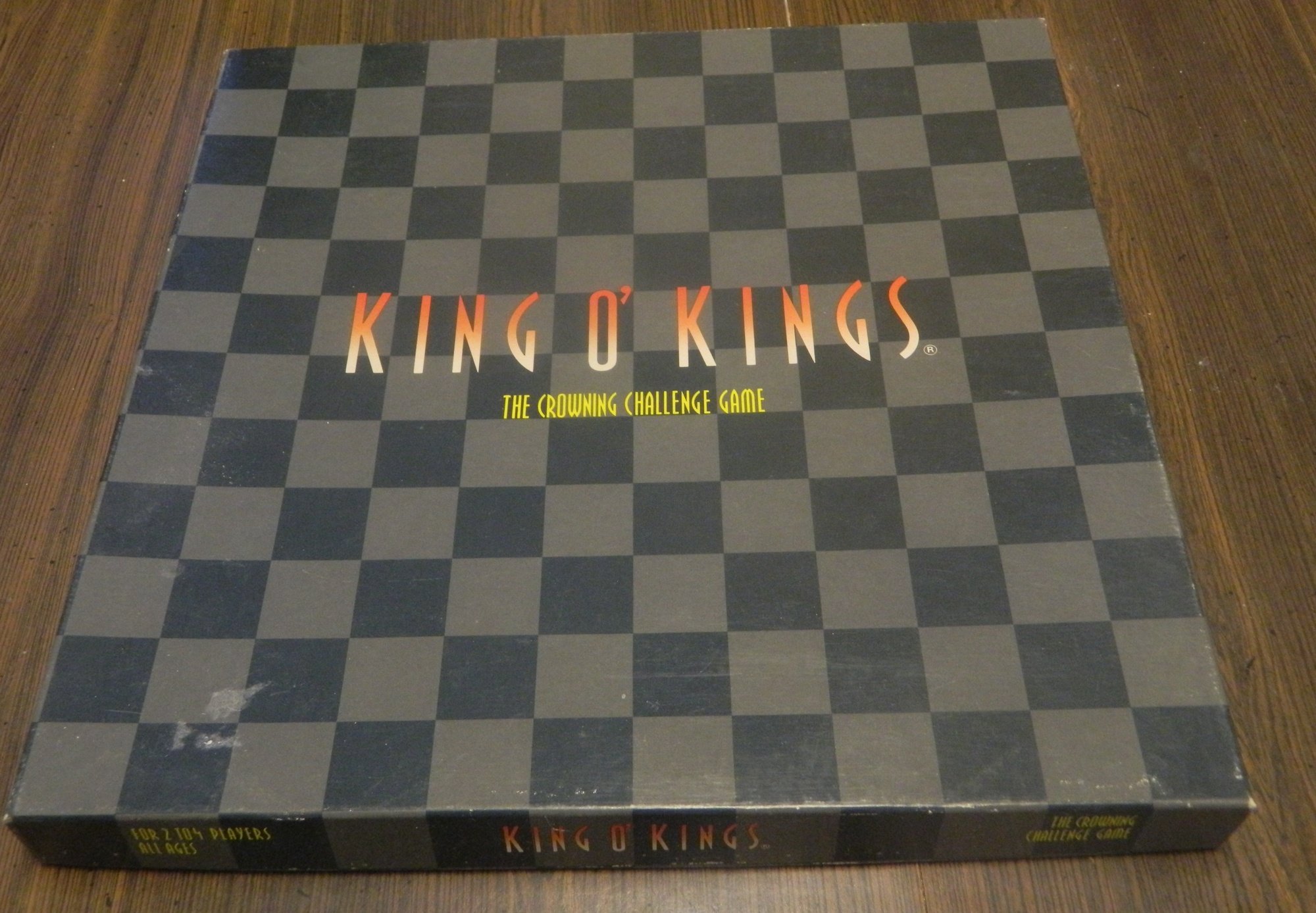 A player can capture the pawns of an opponent (you can’t capture your own pawns) by moving diagonally onto a space occupied by another player. That pawn is added below the capturing player’s pawn and the piece is now a prince. As a prince, the piece can now move two spaces diagonally. A prince is not able to capture another player’s prince though. Once a prince captures a pawn (one high player piece) or a pawn captures a prince, the piece is turned into a king and is removed from the board. The king counts as a point for the player who possesses it.

When no more moves can be made, the game ends. Whoever has the most points/kings is declared the winner.

Checkers has been a classic game for a very long time. Various versions of Checkers date back to thousands of years ago. Being such an old game there have been many variations to the rules over the years in order to try and improve the game. While King O’ Kings is not exactly the same as Checkers, it has enough similarities that I would consider it to be a variant of Checkers.

One of Checkers’ weaknesses is that it is only a two player game. Looking at King O’ Kings I thought it had some promise. King O’ Kings supports four players and it looked like it could be a pretty strategic game. Unfortunately King O’ Kings was a disappointment.

The biggest problem with the game is an issue with stalling. In the game I played it appeared that the best strategy would be to try and stall for as long as possible. When you can move pieces inside your safety zone, you should always do it. Honestly I don’t see any reason to remove pieces from your safety zone except when capturing another players’ pawn or when there is no other place to move a piece. I don’t see much incentive to be aggressive, so players stall and try not to move pieces outside their safety zone.

The stalling continues once players need to start removing pieces from the safety zone. Early in the game it is advantageous not to take other players’ pieces. Usually early in the game the pieces are positioned that whenever someone captures a piece there is another piece ready to capture that piece. You don’t want to attack first since your piece will just be taken from you. In King O’ Kings once a piece reaches a height of three pawns it is removed from the board and scores a point for the player who creates it. If you capture a piece early your piece will be two pawns high. Before it gets back to your turn it is likely that another player will steal it and be able to bank the point for themselves. Unless a player has left a pawn unguarded there is no reason to be the first attacker. Players continue to stall until one player is forced to attack first. That player ends up throwing away their pawn since as soon as they take a pawn, it will be taken away from them and banked.

I have two theories of why the stalling occurs.

First I think the middle section is too small. With the middle section being so small (4X4) it is too congested for four or even three players. Players are not able to really move their pieces out from the row in front of their safe zone without pretty much sacrificing the piece. When all of the players put their pieces out, there is no place to move pieces safely. If the center of the board was larger (at least 6X6) I think this problem would have been somewhat eliminated since players would have had more space to move which would have encouraged more movement towards the center of the board.

The second problem leading to the stalling problem is the process of being “Kinged”. With only three pieces being needed, you really can’t take any other players’ pieces since they will then take that piece back the next turn and they will then have a king. By attacking another player you usually are just sacrificing your own pawns. I think raising the requirement to four pieces to create a king might alleviate this problem a little.

The components of King O’ Kings are okay. The player pawns are your typical plastic checker piece. The gameboard is made of moderately thick cardboard.

When I think of King O’ Kings I think of what it could have been. The game had potential to be a good game. The rules are interesting and provide an option to play four player checkers. The rules lead to unintended consequences though which ruin the game. The constant stalling at the beginning of the game gets tiring quickly. Whoever has to attack first usually suffers by having to sacrifice several of their pawns early in the game. This player ends up having no chance at winning the game.

It’s too bad that there is some much stalling in the early game since the game actually starts picking up later when stalling no longer helps you. In the middle to late portions of the game strategy actually starts coming into play since you actually have to start positioning your pawns in order to capture the remaining pawns. This shows that if the stalling problems were eliminated, King O’ Kings could have been a much better game.

Overall King O’ Kings is not a terrible game. The game suffers from too much reliance on stalling early in the game. If you can either find a way to eliminate the stalling tactics or can get through them, you will actually probably enjoy King O’ Kings. If you really like Checkers and you like the concept for the game, I would maybe pick up the game if you find it cheap. Otherwise King O’ Kings can be easily skipped.