When you look at most dexterity games, you see a lot of games where the objective is to try and add/remove pieces from a tower structure while avoiding knocking it over. What would happen if instead of using a tower you used an arch though? Well that is the premise behind the 1992 Parker Brothers dexterity game Arch Rival as you try to add pieces to the arch and not knock it down. While the arch structure in Arch Rival is interesting, it ultimately leads to most of the game’s problems.

How to Play Arch Rival

Place the playing pieces out on the table so everyone can reach them. Place the two supports on the base. Start placing the compartments on the supports with the open end facing outwards. The order you place the compartments doesn’t matter except that the “keystone” (the largest compartment with a V shape on the sides) has to be placed in the middle of the arch. 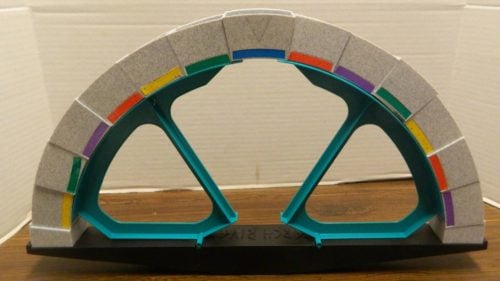 Once all of the compartments have been placed, twist the supports towards the middle to remove them. 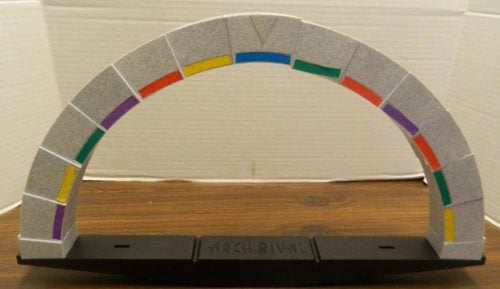 Choose any method to pick the first player. 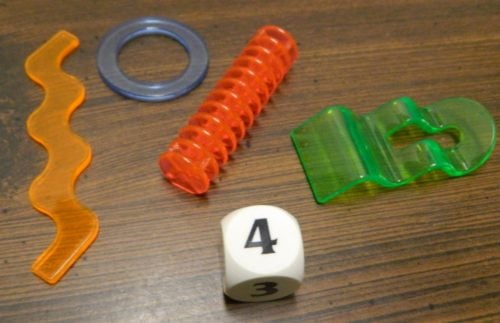 This player has rolled a four so they will have to place four pieces on their turn. 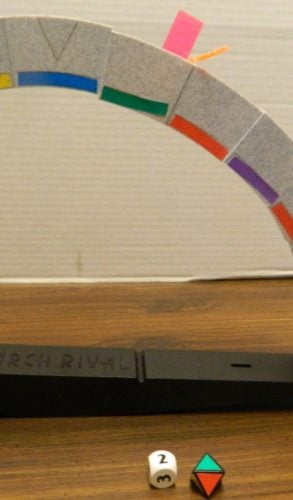 The player rolled a two and a green so they placed two pieces in the green compartment.

If a player rolls “Arch Rival” on the color die, the player to their left gets to choose which compartment the player will put all of their pieces into. 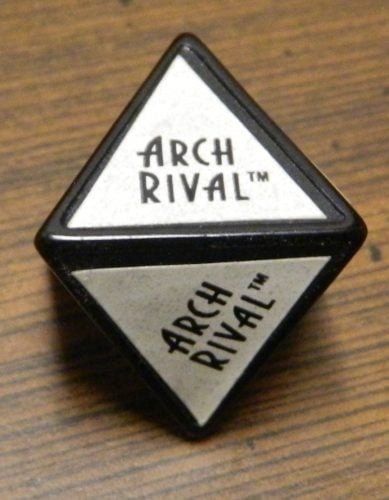 This player has rolled the Arch Rival section of the die. The player to their left will decide which compartment they will have to play their pieces in.

Once a player has placed all of their pieces, the next player clockwise takes their turn.

If all of the pieces have been placed into compartments and the arch hasn’t collapsed, play proceeds to stage two. In stage two players just roll the color die. After rolling a color, a player will have to remove all of the pieces from a compartment matching the color rolled. If you roll a color that has no pieces in it, you don’t have to remove any pieces. If you roll “Arch Rival” the player to your left gets to choose which compartment you will remove pieces from.

If the arch still hasn’t collapsed after removing all of the pieces, you continue to play the game by adding pieces back into the compartments and the process repeats until the arch collapses.

The arch has collapsed. The player who knocked over the arch loses the game.

My Thoughts on Arch Rival

I am going to start by saying that your experience with Arch Rival may differ from my own. I say this because after looking at Board Game Geek, people’s experiences with Arch Rival tend to differ significantly. A lot of people seem to think the game is way too easy as you have to be careless or intentionally trying to knock over the arch. On the other side of the spectrum there are people that complain that the arch barely stays together at all. My experience with the game clearly fits into the later category.

I have to say it is pretty hard to like a game if you can barely set it up without it falling apart. In total I probably set up the arch five to seven times. Only once did the arch seem to stay together for any noticeable length of time. In that attempt the arch was able to support most of the game’s pieces. In every other attempt the arch could only hold a couple pieces before collapsing. At least once the arch collapsed before any pieces were added. This is a serious problem with Arch Rival.

With people having such wildly different experiences with Arch Rival, I was wondering what was wrong with my copy of the game. I think the most likely culprit are the components themselves. I don’t know if it is due to wear or that the pieces just weren’t manufactured that well. The pieces of the arch don’t seem to sit flush against one another. When assembling the arch the pieces are basically pushing each other out of position. While my copy of the game was used when I found it and the game is 25 years old, the pieces don’t look that beat up so I don’t know if this issue can be attributed to the condition of the pieces.

Other than the arch pieces being defective in some way, the only other conclusion I could come up with is that it is much harder to set up the arch than it should be. In the one instance where the arch stayed up for a considerable length of time, the pieces were lined up almost perfectly. You have to really fiddle with them before removing the supports in order to make the perfect arch. If this was the culprit I still see it as a complaint because the setup should not require such precise placement of the pieces. As a whole it takes way too much effort to set up the game each time. Unless your arch is really stable, there is a good chance you will spend at least as much time setting up the game as you actually spend playing it.

While I had troubles getting the arch to actually stay up, the issue that most people have is almost as bad. The fact that the arch rarely ever falls down is really bad as well. How interesting can it be to play a game where you have to be extremely careless to fail? While it is worse not even being able to play the game, it can’t be enjoyable playing a dexterity game with next to no suspense.

So I will say the fact that I could barely get the arch to stay up for more than a couple of pieces probably had a pretty big impact on my thoughts about the game. That is kind of a shame since I actually think the idea behind the game is pretty interesting. For the most part Arch Rival is like any other dexterity game. You need to add/remove things without knocking down the structure. There really aren’t any truly original gameplay mechanics in Arch Rival. I did think the idea of using an arch instead of a tower was a really clever idea though. It doesn’t drastically change gameplay but it is something that makes Arch Rival stand out among other similar dexterity games.

Outside of the arch structure though, Arch Rival is your basic dexterity game. If you have played one of these type of games before, you should know what to expect out of Arch Rival. Basically your success in the game will come down to how steady your hands are and how much luck is on your side. Steady hands are important but luck seems to play just as big of role in the game. What number and color you roll will play a big role in how successful you are in the game. If you keep rolling low numbers it will be much easier to win as you will have to play less pieces. Like all of these type of games turn order is also really important as you can easily be put into a position where it is next to impossible to make a move without knocking over the structure.

As a whole there are very few decisions to make in the game. I really only see two decisions that you have to make in the game. The first decision is deciding which pieces you should add to the structure. This seems to be pretty obvious as I would assume that it would be best to just pick all of the lightest pieces since why add more weight to the structure than you have to. The only other decision comes when the player to your left rolls “arch rival”. This is actually the most interesting decision in the game as you try to force your opponent to place their pieces in the least stable part of the structure.

While I have already addressed this somewhat, the component quality of Arch Rival could have been better. I have already mentioned that the pieces that make up the arch don’t seem to work well for all copies of the game. The best components are probably the playing pieces as they are pretty nice. Otherwise the components are kind of dull. Space conscious people will also probably hate Arch Rival as the game’s box is really large. I really think Parker Brothers could have found some way to make the box a little smaller.

Should You Buy Arch Rival?

Arch Rival has some issues. The idea of using an arch for a dexterity game is an interesting idea. Outside of the arch structure though, Arch Rival doesn’t really differ from most other dexterity games. Just like every other dexterity game you add/remove items from the structure trying to avoid knocking it over. Most of the problems with the game come from the arch itself. Some people’s arches seem to be way too stable while others don’t seem to stay together no matter what you try. Both ends of the spectrum create serious issues for the game. These issues make Arch Rival one of the worst dexterity games that I have played.

If you would like to purchase Arch Rival you can find it online: Amazon