When most people think of the Kenner brand the first thing that probably comes to mind is Star Wars action figures. Kenner made their name making Star Wars action figures but actually made quite a few other toys and games. In the board game scene Kenner is mostly known for making board games based on movie/TV franchises (Star Wars in particular). They did make an occasional non-licensed game but none ever became particularly popular. Today I am going to look at one of these forgotten games Turn On!. While Turn On! has some interesting ideas the game fails due to being way too silly and surprisingly more inappropriate than you would assume.

How to Play Turn On!

Insert the batteries into the game unit. Put one hand on both handles to test that the unit is working. Shuffle the cards. Divide into teams of two and choose which team will start the game. 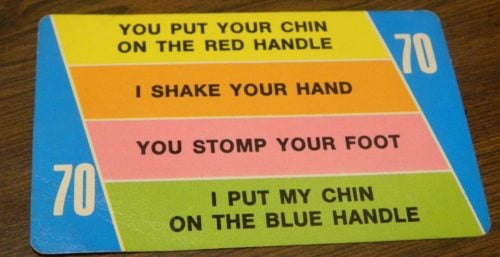 If there is still more time left on the timer, the team attempts the next card. The current team will keep trying cards until the timer ends. Any cards completed after the timer ends will score no points.

After four rounds each team will tally the amount of points they earned during the game. The team with the most points wins the game.

My Thoughts on Turn On!

If the “how to play” section didn’t make it clear, Turn On! kind of feels like Twister and other similar dexterity games. The object is to work with your teammate in order to complete as many cards as you can to score points. Basically the whole game revolves around the electronic component that has a timer as well as a buzzer. The electronic unit has two metal bars which the game uses to tell if you have completed the actions printed on the cards. This is done by using a small electric current (which you can’t feel) and when you have completed a circuit using yourself and your teammate, it sets off the buzzer.

While I didn’t really care for Turn On! (which I will get too shortly), I actually think the idea behind the game is quite clever. Before playing the game I was quite skeptical. I really didn’t think the game was going to work especially with the game being forty years old. While I didn’t play the game for long, I was really surprised by how well the game actually works. Almost immediately after the circuit is completed the buzzer goes off. The game really deserves a lot of credit for creating an electronic component that still works forty years later.

The problem with Turn On! is that it wastes the potential of the game. The electronic component is actually pretty cool and yet the game doesn’t do much with it. The idea of creating a Twister like game that utilizes a electrical circuit had potential but it is kind of ruined by the cards included with the game. The actions that the game has you perform are kind of stupid/silly. I think the game could have come up with much better ways of using the mechanic. Then there are the cards that were designed for you to fail. Why in the world did the designers think it was a good idea including cards that you could never complete successfully? It just adds unnecessary luck to the game. Basically I think the goal of the cards in the game are to make you look like a fool.

When you first look at Turn On! it probably looks like a children’s/family game. The game has a recommended age of 8+ after all. The game has all of the makings of an innocent silly family game and yet when you actually look at the game it is more adult that you would think. Now don’t get me wrong, Turn On! is not an adult game but I don’t know if I would consider it a children’s game either. Some of the actions that you have to perform would be kind of creepy for young children and those with “dirty” minds can take several of the cards out of context. Here is just a sampling of some of the cards included in the game:

These are just some of the questionable cards included in the game. It feels like the designers didn’t even proofread the cards they decided to include in the game. I think the designers could have taken a little more time coming up with better cards since Turn On! was a game meant for children. In practice Turn On! ends up as more of a game for teenagers and adults. The game really has some mixed messaging since most of the rest of the cards are pretty tame and could actually work pretty well for younger children. These cards could easily be removed from the game though which I would highly recommend since I think children who like these type of silly games could actually have some fun with Turn On!.

I think the main reason why Turn On! was a commercial failure was that it doesn’t really have a clear audience. The questionable cards are just one example of where the game could have done a better job marketing itself. The game somewhat feels like a game that was made for teenagers and yet it ends up being more of a game for children. I honestly don’t see a lot of people really enjoying Turn On!. Outside of adults that have no problem making a fool out of themselves or have had a few drinks, I don’t see many adults enjoying the game. I even think most teenagers will find the game too silly to play. Basically the only people I could see really enjoying the game are young children who like these active dexterity type games like Twister.

Being a somewhat serious person I just couldn’t really get into Turn On! The game was just too silly for me. Turn On! is a game that is only going to work for very specific groups of players. If you are not in one of those groups you are probably going to hate playing the game. I would not consider myself to be in one of the groups that would enjoy Turn On!. If you like these type of really silly games though I think you could enjoy Turn On! quite a bit more than I did.

Should You Buy Turn On!?

Turn On! was an interesting idea for a board game that just didn’t work out. The electronic unit is actually pretty cool and works very well for its’ age. The problem is that the game built around the electronic component is lacking. The cards force you to do extremely silly things and some of the cards are pretty questionable for younger children. You will make a fool out of yourself while playing the game. I don’t mind playing silly games but Turn On! was just not for me which is reflected in the final rating I gave the game. If you like silly games though you might like the game considerably more than I did.

If you aren’t really into silly games, I can’t see you liking Turn On! The only adults that will really enjoy the game are those that really like silly games or want to play something after having a couple drinks. The audience that I think may enjoy the game though are children that like these type of silly games. I would recommend removing the somewhat questionable cards from the game though. No matter how much you like silly games, I would only recommend Turn On! if you can get a really good deal on the game.

If you would like to purchase Turn On! you can find it online: eBay