How to Play Get the MacGuffin

On a player’s turn they will take one of four actions.

Play an Action Card: Play the card to the discard pile and follow the card’s instructions. 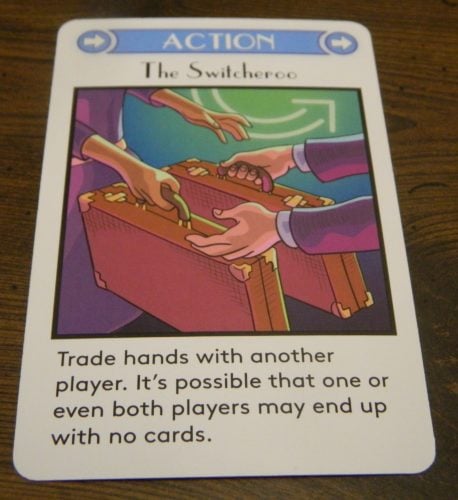 When a player plays this card, they get to trade their hand with another player. 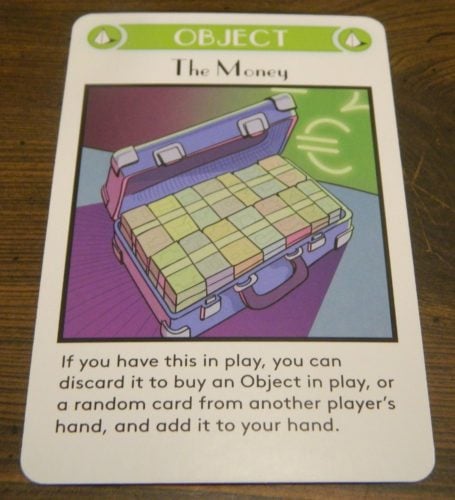 This player has played an object card in front of themselves. They can use a future turn to use the card’s special ability. 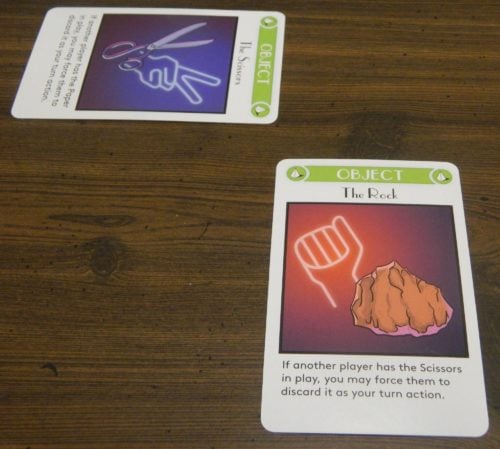 This player can use their turn to use their object’s ability to remove the other player’s scissors card.

Discard an Object: A player can choose to discard an object played in front of them for their action.

Once a player has taken an action, play passes to the next player clockwise.

When a player has no cards in their hand or in front of them, they are immediately eliminated from the game.

My Thoughts on Get the MacGuffin

For people familiar with Looney Labs’ line of card games, Get the MacGuffin is going to feel similar and different at the same time.

Like the rest of Looney Labs’ games, the game is quick to pick up and play. Basically the only rule in the game is to try and stay in the game as long as possible. On your turn you either play a card, use the ability of a card played in front of you, or discard a card played in front of you. With such simple mechanics you should be able to teach the game to new players in around a minute. The most challenging part about the game is reading the text on the cards and figuring out how you can use the card’s ability to keep you in the game.

Get the MacGuffin also fills that niche of filler card game. Games of Fluxx are usually pretty short but can occasionally take quite a bit longer. Get the MacGuffin is short and doesn’t have nearly as variable of length. I would say most games will only take five to ten minutes. Once players are familiar with the cards, I can see most games taking close to the five minutes unless players suffer from serious analysis paralysis. That is not that surprising with there only being 23 cards in the game. Since you have to play a card or use an ability, you will go through the cards pretty quickly. This five to ten minute playtime is about right for the game. Get the MacGuffin is meant to be played in quick doses and not be strung out over a long period of time especially since the goal of the game is to eliminate the other players. With the game being short eliminated players don’t have to sit around forever waiting for the other players to finish the game.

The last thing that I think Get the MacGuffin shares with the Fluxx series of games is that it has some of the randomness that is prevalent in Fluxx. While the rules in the game don’t ever change, the entire game can change with the play of one card. A player can be one turn away from being eliminated and then use one card to push themselves back into the leader position. As the title of one of the cards allude to, no player is dead until they have been officially eliminated from the game.

In general I like this part of the game as there is excitement in having no idea what is going to happen next. One smart use of a card can easily turn the tide in your favor. It is just as likely to work against you though as the play of one card can literally eliminate you from the game. This leads to Get the MacGuffin relying heavily on luck. If you play a card poorly you could lose the game by yourself but the final outcome is likely going to come down to who gets the right cards at the right time. I normally wouldn’t like how much the game relies on luck. With the type of game that it is and being so short, the reliance on luck is not as bad as it would be in some games.

As I mentioned earlier, while playing Get the MacGuffin I felt that it played like a combination of Fluxx and a game like Love Letter. This comparison is not perfect but I think it does a pretty good job explaining how it plays differently than Fluxx. In Fluxx you have a bunch of different cards making it unlikely that you will see a lot of them in a given game. In Get the MacGuffin you have a set of 23 cards so most of the cards will be played at some point in the game. After a couple games players will start remembering all of the cards that are in the deck. Players need to figure out how to use the cards that they were dealt to neutralize the cards they know the other players still have in their hands. The ultimate goal is to use your cards to stay alive for as long as possible while eliminating the other players.

In principal I really liked this aspect of the game. It is fun trying to figure out what cards the other players have and come up with ways to counteract them. On your turn your goal is to figure out how to extend the number of turns you can remain in the game while trying to eliminate the other players. It is really satisfying finding a way to eliminate another player or extend your time in the game to the detriment of another player. The game is usually suspenseful until the very end as the player who wins likely could have only survived for one or two more turns. It is really satisfying making a move at the last minute to steal victory from another player.

The problem is that in execution it doesn’t work as well as I was hoping. I think this can be attributed to three things.

With Get the MacGuffin only having 23 cards, it had to make the most out of every card. In my opinion it feels like the game wasted some of the cards. Three cards have a player make a gesture when played and then have no other impact on the game. Three other cards are used for a rock paper scissors matchup. I liked this idea but I think it used up too many of the games limited number of cards. I think these cards could have been better used to add actions or items to the game that would have played a bigger role in the game.

Get the MacGuffin’s cards are also not all equal. There are definitely cards that are better than others in the game. The three cards that just have you perform an action are the worst cards as all you can do with them is use one of your turns to get rid of them. Meanwhile the MacGuffin and the Backup MacGuffin could be the most powerful cards in the game as you can keep using them over and over again for your turn. The only issue is that players are likely to use all of their other action cards to steal them from you. Most of the other action cards can be pretty powerful but some cards seem to have more uses than others.

With these issues with the cards, Get the MacGuffin is not as good as I was expecting. The game is still fun but gets a little repetitive after a while. I could see playing a couple rounds at a time but it is not the type of game that you will play for an hour at a time. I am kind of curious whether Looney Labs plans on expanding out the game like the Fluxx franchise. I think this could improve the game quite a bit if new decks would introduce new actions/objects that would change up the gameplay.

As far as the components are concerned you get what you would expect out of a Looney Labs game. The cards are quite a bit larger than your normal card. I would say they are closer in size to a tarot card than a standard playing card. The design of the cards are pretty reminiscent of Fluxx and work well for the game. The artwork is also pretty nice. While I wish the game had more cards, there is nothing to complain about with regards to the components.

Should You Buy Get the MacGuffin?

Overall I would say that Get the MacGuffin is a solid filler card game. You can teach the game to people in around a minute and most games should only take five to ten minutes. Like Fluxx, Get the MacGuffin can get pretty random at times. A player can easily go from being eliminated to winning the game. While this leads to quite a bit of luck in the game, it is kind of exciting knowing that the entire game can change at any time. Since there are a limited number of cards in the game, players need to figure out how they can use the cards they were dealt in order to extend their time in the game while eliminating the other players. The only problem that I had with Get the MacGuffin is that I think more could have been done with the cards. Some of the cards feel kind of wasted and some are considerably more powerful than others. I think the game would have benefited from having a few more cards. You can have fun with Get the MacGuffin but it is one of those games that you will play a couple times and then put away for another day.

If you don’t really care for filler card games or don’t like games that are kind of random/rely on a lot of luck, Get the MacGuffin may not be for you. If the game’s concept intrigues you though and you like games like Fluxx, I think you will enjoy Get the MacGuffin.

If you would like to purchase Get the MacGuffin you can find it online: Amazon