A while back we looked at the card game Math Fluxx. Along with today’s game Chemistry Fluxx, Looney Labs have started a line of educational card games. While Math Fluxx could have been a little more educational, it added some interesting new mechanics to the Fluxx formula to differentiate it from the other games in the series. After playing Math Fluxx I was interested in seeing what Chemistry Fluxx would do with the formula. While Chemistry Fluxx doesn’t drastically change the Fluxx formula, it does add some interesting new rules to the game.

How to Play Chemistry Fluxx

Place the basic rule card in the center of the table. If the players choose to use the meta rule, they also place that card on the table. If you don’t want to use the meta rule, place it back in the box. Shuffle the rest of the cards and deal out three cards to each player. The rest of the cards form the draw pile. The first player that draws a card becomes the first player.

Chemistry Fluxx and Fluxx in general are games of constantly changing rules. Based on what cards are played the basic rules of the game will always be changing. The basic steps you will take on any given turn are as follows:

At this point there are three new rule cards in play. On each turn every player will draw five cards, play two cards and discard down to two cards at the end of their turn.

After you have completed all four steps play passes to the next player clockwise. 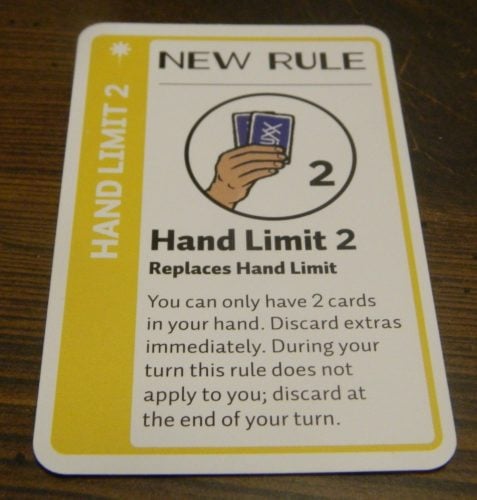 New Rule Cards: New Rule cards are played to the center of the table. The rule card describes a new rule that comes into play when the card is played. If this rule contradicts another rule currently in play, it replaces the previous rule (which is discarded) and all of the players have to immediately follow the new rule. For example if the new rule card forces players to draw more cards, the current player will draw the additional cards before ending their turn. 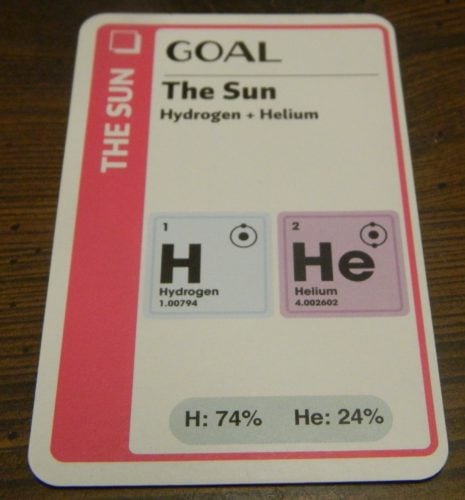 Goal Cards: Goal cards are played to the center of the table. These goal cards tell the players what keeper cards they need to have in front of themselves in order to win the game. If there is already a goal card in play, the new goal card replaces the old goal. 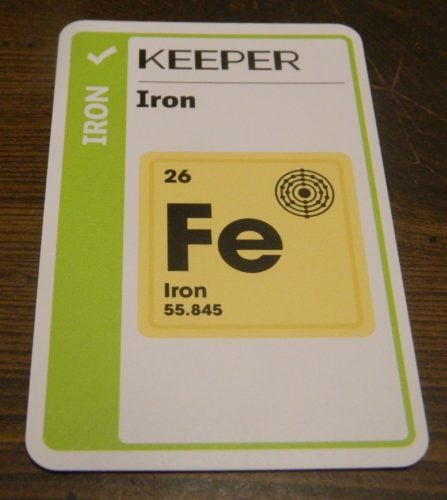 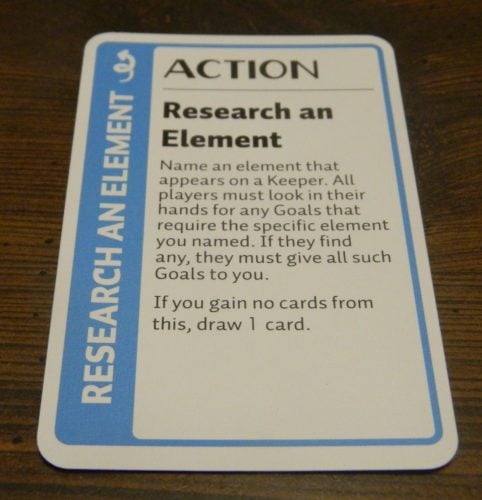 Action Cards: A player plays an action card for its’ effect and the card is then discarded.

A player wins the game immediately if they meet the conditions on the current goal card. 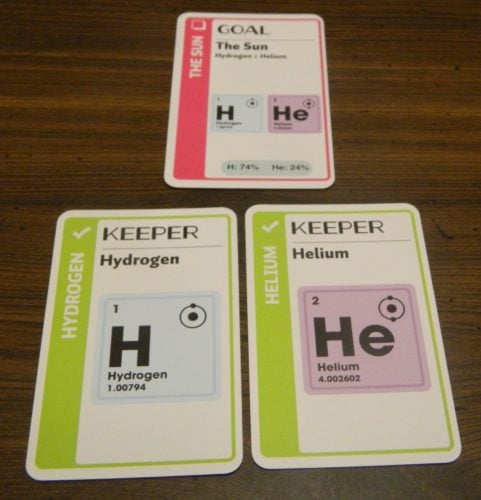 The current goal card is the sun. Since a player has acquired both hydrogen and helium they win the game.

My Thoughts on Chemistry Fluxx

With Chemistry Fluxx being another game in the Fluxx franchise it shouldn’t surprise anyone that it shares a lot in common with every other Fluxx game. Seeing as we have reviewed Fluxx, Firefly Fluxx, and Math Fluxx I don’t think it pays for me to spend a lot of time talking about Fluxx in general. Basically Fluxx is a quick card game where the rules are always changing. On a player’s turn they basically draw and play cards. Some of the cards help you, some hurt the other players, and some even change the rules of the game. The goal of Fluxx is to get keepers in front of you that match those shown on the current goal card.

I would consider Fluxx to be a really quick and easy card game. You can basically teach the game to a new player in minutes and you should finish most games within five to twenty minutes. There is quite a bit of luck in the game but Fluxx is meant to be a quick game that you can have fun with and not put too much thought into. With Chemistry Fluxx sharing so much in common with the other Fluxx games, if you have played a Fluxx game in the past you should have a good idea of how much you will like Chemistry Fluxx.

While Chemistry Fluxx shares a lot in common with most other Fluxx games, it does do a couple unique things that I would like to talk about.

This is one area where I think Chemistry Fluxx does a better job than Math Fluxx. The reason that I think Chemistry Fluxx does a better job on the educational front is that most of the cards actually reinforce chemistry concepts. All of the keeper cards that feature an element include the atomic number, atomic mass and the element’s symbol. The goal cards that have you combining elements tell you what compound is created as well as the chemical makeup of that compound. There are also action cards that let you name elements or compounds in order to get more cards.

The addition to Math Fluxx that I liked most was the idea that you could use math to combine keepers to meet a goal card. The mechanic didn’t drastically change the gameplay but it added a decent amount of strategy and it made Math Fluxx feel unique compared to the rest of the Fluxx games. I was a little disappointed that Chemistry Fluxx doesn’t have a similar mechanic that significantly tweaks the Fluxx Formula. The one unique thing in Chemistry Fluxx’s gameplay is that it seems to have an emphasis on recycling cards. I don’t know if this is present in other versions of Fluxx but Chemistry Fluxx has quite a few cards that allow you to discard cards to draw new cards. I actually really liked these mechanics as it speeds up the game and gives you more choices.

While Math Fluxx included a couple meta rules, Chemistry Fluxx only includes one. I really like the meta rule though and would highly recommend using it since it fixes a problem that Fluxx has always had. This meta rule lets players one time during their turn discard as many goal cards as they want to draw new cards. In previous Fluxx games there has always been the problem of getting a hand full of goal cards. This is a problem since you can’t really do much with a goal card if you don’t have the keepers needed to win with that goal card. Using this meta rule allows you to get rid of these excess cards and possibly get cards that you could actually use. This does lead to few goal cards actually being played as players mostly discard goal cards instead of playing them. We didn’t really encounter any problems with a player getting a goal they needed to win the game though.

Other than the recycling mechanics, Chemistry Fluxx adds a couple other rule and action cards that I don’t remember seeing in other versions of the game. A lot of the rule cards in Chemistry Fluxx seem to give players additional actions that they can perform on their turn. For the most part I like them since they add more options/flexibility to the game. The rules give you additional options but a lot of them come with some risk. There is even a rule card that lets you add any other action card to it that every player can then use on their turn. This could really lead to some chaotic fun in Chemistry Fluxx.

Should You Buy Chemistry Fluxx?

If you have ever played a Fluxx game before you probably already have a pretty strong opinion on the game. I like the Fluxx series as a quick fun little card game that doesn’t require a ton of thought. Some people don’t really care for the game’s high reliance on luck though. Chemistry Fluxx is unlikely to change your mind about Fluxx. The game includes some interesting new rule cards that utilize a lot of card recycling but the main mechanics of the game remain unchanged. Add in some educational components and Chemistry Fluxx is a solid game in the series but it is not going to revolutionize the Fluxx series.

If you wouldn’t consider yourself a fan of Fluxx, Chemistry Fluxx is not going to change your mind. If you like Fluxx and are interested in the chemistry theme, you should enjoy Chemistry Fluxx. If you have never played a Fluxx game before but are looking for a quick and easy card game featuring chemistry you should look into picking up Chemistry Fluxx.

If you would like to purchase Chemistry Fluxx you can find it online: Amazon