Long time readers will know that we at Geeky Hobbies are fans of the Fluxx series of card games. At this point we have looked at seven different Fluxx games including the original Fluxx along with Anatomy Fluxx, Chemistry Fluxx, Doctor Who Fluxx, Firefly Fluxx, Fluxx the Board Game, and Math Fluxx. Today I am looking at Fairy Tale Fluxx which adds a fairy tale theme while also scaling back some of the rules in order to make it more accessible to children and Fluxx newcomers. Fairy Tale Fluxx might not differentiate itself much from the rest of the Fluxx series but it is enjoyable like the rest of the series and does a good job making Fluxx more family friendly.

How to Play Fairy Tale Fluxx

As Fairy Tale Fluxx is a game where the rules are always changing, the actions that players will take on their turn will change from time to time. Each player will perform at least three actions on their turn though.

The number of cards you draw and play along with other rules will be dependent on the rule cards that are in play. 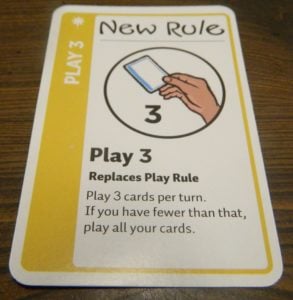 New Rule: When a player plays a new rule card, it will be placed in the center of the table and will apply to all of the players. When the new rule card contradicts another rule already in play, the previous rule card is discarded and is replaced by the new rule card. Rule cards that apply to hand and keeper limits will immediately apply to the other players and will apply to the current player at the end of their turn. If a rule card forces a player to draw or play more cards than they already did, they will have to draw or play additional cards until they are up to the new number. If a new rule card allows a player to take a special action, the player can take the action at any point during their turn. 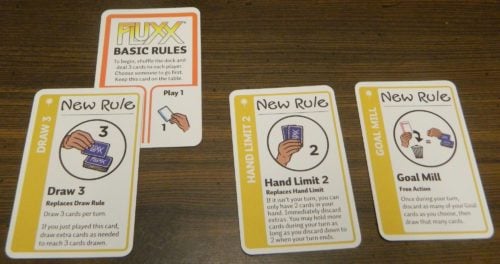 There are currently three rule cards in play. On a player’s turn they will draw three cards and play one. At the end of their turn they can only have two cards in their hand. Once during their turn the players can discard as many goal cards as they want from their hand and draw the same number of cards from the draw pile. 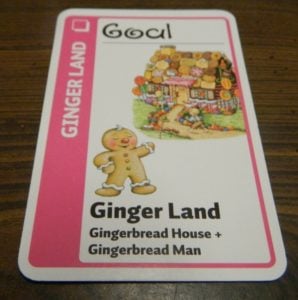 Goal: Goal cards are used to set the current objective in the game. In order to win the game a player has to have the keepers featured on the goal card in front of them. When a goal card is played to the center of the table, it replaces the previous goal card which is then discarded. 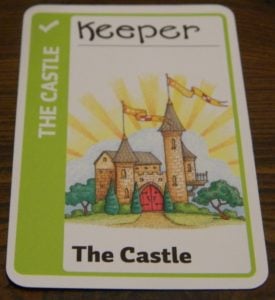 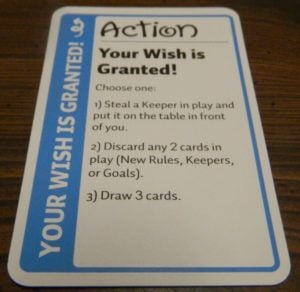 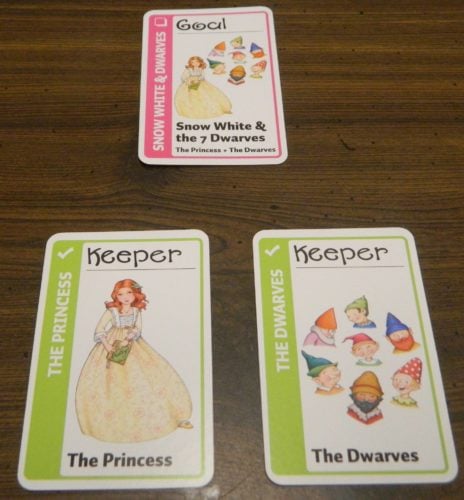 The current goal is to acquire the princess and the dwarves. This player has acquired both cards so they have won the game.

My Thoughts on Fairy Tale Fluxx

As we have already looked at quite a few other Fluxx games here on Geeky Hobbies in the past, I am not going to go into a lot of detail about the main gameplay as I have addressed my thoughts on it in the other reviews of the series. Basically Fairy Tale Fluxx is like every other Fluxx game where the rules are constantly changing. While the game relies on quite a bit of luck and can be kind of chaotic at times, I have always liked the series as there is something fun about a game where everything can change based on one card being played. While the game relies more on luck than strategy, I think the series deserves more credit than it gets in the strategy department. There is strategy in figuring out how to best play the cards in your hand to improve your odds of winning.

Basically if you have ever played a Fluxx game before you know what to expect out of Fairy Tale Fluxx. The game doesn’t add any new mechanics to the franchise and only has a couple new unique cards. Your feelings about Fluxx in general should apply to Fairy Tale Fluxx as well. If you have never played a Fluxx game before it can basically be summed up by saying that it is a game where the rules are always changing. You need to use this fact along with the cards in your hand in order to get keepers in front of you that match the current goal card. If this concept sounds interesting to you and you don’t mind that the game can get a little chaotic and relies on some luck, you should enjoy your time with Fairy Tale Fluxx.

While Fairy Tale Fluxx is very similar to the rest of the series, I did notice that Fairy Tale Fluxx seems to be gauged a little more towards families and new Fluxx players than most Fluxx games. Part of this is due to the theme/artwork but the main reason I say this is that Fairy Tale Fluxx has removed some of the unique cards/mechanics found in other versions of the game. Fairy Tale Fluxx does not have creepers, ungoals, meta rules, surprises or any other unique type of card that have been included in other games in the series. Instead Fairy Tale Fluxx focuses on the four main types of cards: action, goal, keeper and new rule. I would also say that most of the cards are easier to follow as the text is more direct and easier to interpret. Generally I see Fairy Tale Fluxx being a good introductory Fluxx game and I think it may appeal more to families with kids than adult only audiences.

I would say that a large majority of the cards in Fairy Tale Fluxx have appeared in some form in another version of Fluxx. This is not a bad thing as most of the cards chosen are some of the better cards from the series. If you were looking for some cards that would drastically change the Fluxx gameplay though you may be disappointed. After briefly looking through the cards I would say that there might be one or two action cards and four or five new rule cards that I don’t remember from any of the other Fluxx games that I have played. This was based on my memory of the other games though so there may be a few more or less. I wouldn’t say any of these new cards are drastically different from other cards in the series as most of them involve giving players more opportunities to draw cards.

On the component front Fairy Tale Fluxx is very similar to the rest of the Fluxx series. The cards have the same card stock as every other Fluxx game which is pretty good. The game features the artwork of Mary Engelbreit, a well known children’s artist. While I am not familiar with Mary Engelbreit’s work, I would say that the artwork in Fairy Tale Fluxx is better than your typical Fluxx game. I have always liked the artwork in Fluxx but I think the artwork is even better in Fairy Tale Fluxx. This is not going to be an issue for most people but I do want to point out that the text at the top of the cards appears to be in a Comic Sans style font. I don’t mind but I know how much some people dislike Comic Sans so this might turn off some people. Otherwise the components are basically what you would expect out of every other Fluxx game.

Should You Buy Fairy Tale Fluxx?

At the end of the day Fairy Tale Fluxx is pretty much what you would expect it to be, your typical Fluxx game with a fairy tale theme. Like the rest of the Fluxx series I had fun playing the game. While the game relies on quite a bit of luck, I have always liked the game’s chaotic feel and I believe there is more strategy in the game than most people give it credit for. Outside of the theme and artwork (which is good) I think there are two main differences between Fairy Tale Fluxx and the rest of the series. The game does include a few new cards that I don’t recall from other Fluxx games. I would also say that Fairy Tale Fluxx is simpler than most Fluxx games. It doesn’t have any of the special types of cards like creepers from the Fluxx franchise and the card text is generally easier to follow. This makes Fairy Tale Fluxx more of a family game than some of the other Fluxx games.

Basically my recommendation for Fairy Tale Fluxx is going to come down to your opinion of the Fluxx series. If you don’t like Fluxx or already have another Fluxx deck and don’t care for the fairy tale theme, I don’t think Fairy Tale Fluxx will be for you. If you like Fluxx and either like the theme or want a more family friendly deck, I think you will really like Fairy Tale Fluxx. If you have never played a Fluxx game before it comes down to whether you like the idea of a game where the rules regularly change. If that sounds interesting to you I would recommend checking out Fluxx. Which version of Fluxx you pick up will depend on which theme you prefer.

If you would like to purchase Fairy Tale Fluxx you can find it online: Amazon