To begin a round the first product card is flipped over. All of the players look at the different items listed on the card and try to find one slogan card from their hand that will work with one of the items on the product card. When a player has chosen their slogan card they place it face down and wait for the other players to choose their slogan card. 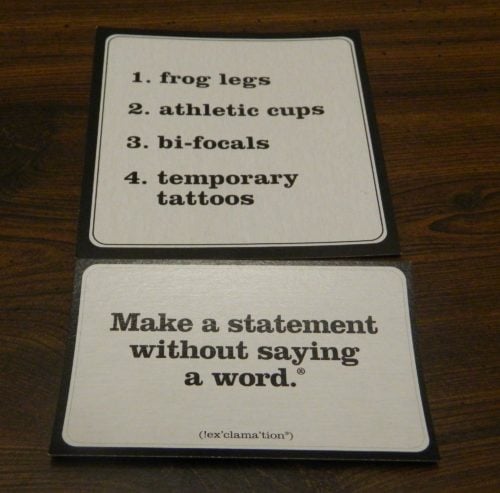 This player has chosen to play the card “Make a statement without saying a word” for this product card. 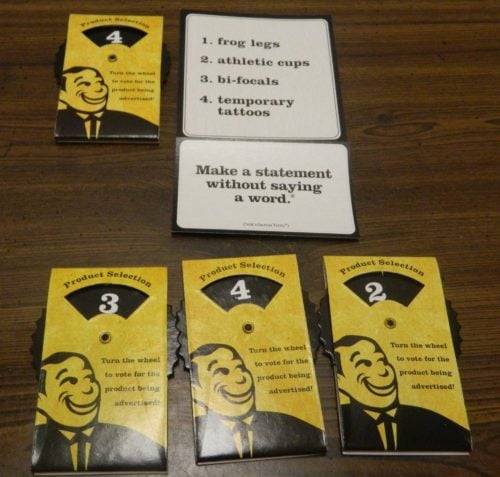 If none of the players guess correctly, the current player loses $200,000. 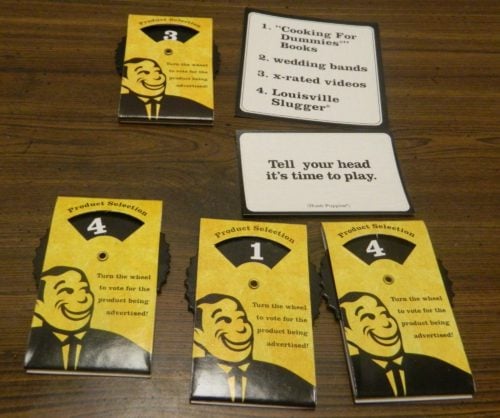 After money is given out the next player presents their slogan. This continues until all of the players have presented their slogan. When everyone has finished the round, each player is dealt another slogan card and the next product card is flipped over. The player to the left of the player who started the previous round will start the next round.

Before starting a new round players have the option to hire SpokesCelebrities to help them out. SpokeCelebrities must be hired in the following order: SpokesAnimals, SpokesPersons, and Max Madison. To hire these “celebrities” you must pay the the corresponding amount to the bank and then you get to take one of the corresponding tokens. If you run out of money and have to fire a celebrity you will only get back a portion of the money you paid them. The cost to hire and the amount you receive when you fire each type of celebrity is as follows: 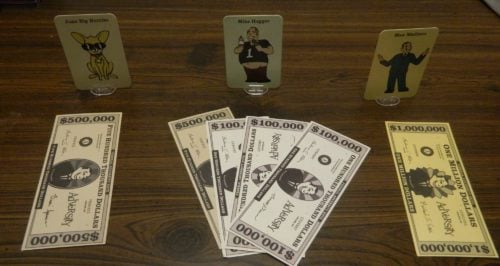 If at any time a player doesn’t like one of their slogan cards they can discard it and draw a new slogan card if they pay $100,000 to the bank for every card that they discard.

This player has won the game since they have hired a SpokesAnimal, a SpokesPerson and Max Madison.

In Adversity each player is in charge of their own advertising agency. Your advertising agency is either extremely lazy or uncreative because instead of creating your own slogans to promote products you have decided to re-purpose slogans used by other products over the years. Despite the legal ramifications and the fact that these slogans were created for vastly different products, your agency is going to push on. So will you be able to re-purpose the slogans better than your competition to the point where the other players can even tell what you are advertising?

When I picked up Adversity I thought it was going to be another Apples to Apples style game where you play cards for a judge who decides who played the best/funniest card. I love these type of games so I was wondering if Adversity would bring something new to the table. While Adversity has the same type of feel to it, it actually has quite a few new ideas that are pretty interesting. Instead of playing cards to appeal to the judge you have to be creative in using slogans to the point where it becomes obvious what product you are trying to sell with it. This is a fun and interesting concept for the game.

Like a lot of these Apples to Apples style games, Adversity is what I would call more of an experience than a game. It actually has a more detailed scoring system than a lot of these type of games but you don’t really play Adversity to win. Instead you play Adversity to have a good time with friends and family. With the right group you can have a lot of fun with Adversity. Players that can come up with creative ways to use slogan cards can get a lot of laughs out of the other players. If no one takes the game too seriously I think the game could be a pretty fun party game.

While I had fun with Adversity, one issue keeps the game from being anything more than a very average game. For the most part the game is really easy. Maybe we just had really good luck but it seems like a rare occurrence not to match at least one person each round. In the game I played there was only one or two times that players didn’t match anyone. These instances were due to the player getting unlucky and having none of their cards work well with any of the products. With players matching so often the game plays too quickly as the game can end in just a couple rounds.

The problem comes from the fact that for most product cards you will likely have one slogan that only makes sense with one or two of the products. This means that you will usually match a majority of the players in most rounds. This makes the game a race to see who messes up first since once a player gets ahead it is really hard to catch up since they will likely score as many points as you every round. One mistake could easily end the game for you. Adversity has the problem that the cards either work too well or don’t work at all. I think the game would have been considerably better if there were less situations where the answer was so obvious.

There is actually one way to get around this which kind of ruins the game. Since the guessers lose nothing if they guess wrong, if one player gets ahead all of the other players could try to sabotage that player by purposely guessing products that they know the other player wouldn’t chose. This would work since none of players would lose points except for the current player. If a player is close to winning and there are some cut-throat players in the game I could see this happening.

While Adversity is a party game, I would say that it is more of an adult game than you would think. The game may work with teens but you will likely have some awkward conversations with younger children since children won’t know what some of the products are. I think it is strange that the game includes so many “adult” products. The game is not even close to as offensive as a game like Cards Against Humanity but it isn’t for children either. Nothing on the cards themselves are particularly offensive but the game could become really dirty with certain groups. This is because the designers seemed to try and find as many slogans as they could that could be used for sexual innuendo.

The one thing you could argue that the spokespeople add to the game is the fact that if you run out of money you will have to fire one of them and end up losing some money. Unless you are playing way too aggressively there is no way this is ever going to happen. Basically you shouldn’t purchase the next spokesperson unless you have enough money that you can afford to have one or two misleading slogans and not be forced to fire them. If you follow the actual instructions you don’t even have to worry about this since you could just save up enough money to hire all three at the same time at the end of a round. Our group decided to only allow players to hire one spokesperson per round which forced players to hire spokespeople earlier but even playing the game in this way put no players in danger of having to fire a spokesperson.

Another problem with the spokespeople is that it makes the game so short. A player can usually win the game in three to five rounds. This is due to it being so easy to match other players and you don’t need that much money to hire all three spokespeople. This is just another reason why I think the game would be better off declaring the winner as the player with the most money. This would help the game because players could play for as long as they want and then just count up money to declare the winner.

Speaking of using house rules, I wonder how Adversity would play using rules from games like Apples to Apples. In this variation one player is the judge for the round and picks one of the products from the product card for all of the other players to play a card for. The other players  all choose one of their cards that either works best for the product, makes the judge laugh or any other criteria that they think will get the judge to vote for their card. The judge would then pick which card they thought was best and would give the product card to that player to indicate that they won the round. Whichever player would get the most product cards would win the game. I haven’t tested this variant but I think it could actually improve Adversity.

Component wise the game is pretty good. I applaud the game for including plenty of cards. With how many cards that are included with the game it is quite unlikely that you will ever have repeat situations unless you play the game a ton. The artwork on the contents are nice. The voters work well. Even though I find the spokespeople to be pointless, the included backstories for the different spokespeople are a nice addition.

Overall Adversity is an interesting game. It has some good ideas that lead to a fun little party game. People who like Apples to Apples style board games will probably have fun with the game. Adversity has a problem with being too easy to match other players though which makes the game more of an exercise of who is going to make a mistake first. The game also has a couple questionable rules/mechanics.