Regular readers of Geeky Hobbies are probably familiar with the fact that I am a pretty big fan of the speed game genre. While the genre does not appeal to everyone, there is something satisfying about being able to play your cards seconds before another player tries to play a card on the same pile. While I like the genre I have no preconceptions that the genre is original. Most games in the genre play pretty much the same with there only being slight differences between the games. Having played 59 Seconds, Dutch Blitz,  Perpetual Commotion, and Qwitch in the past; I was worried that Elevator Eddie was going to be another game from the genre that didn’t do anything new. Ultimately Elevator Eddie is a solid speed card game that suffers from failing to do anything original.

How to Play Elevator Eddie

All of the players play Elevator Eddie at the same time. The players flip over their top card. This is their current card and the only card that they can currently play.

Players look at the numbers of the four elevators on the foundation card. If a player’s current card is one higher or lower than any of the four numbers, they can play their card on top of that section of the gameboard. Once a card has been placed on an elevator, the players will play a card to that section based on the top card. Once a player plays a card they flip over the next card in their pile. 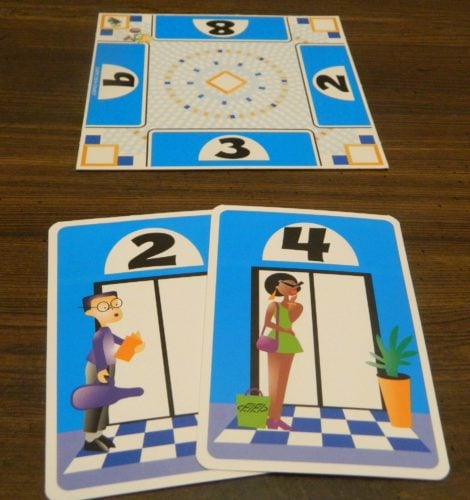 Players are able to play either a two or a four on top of the three. 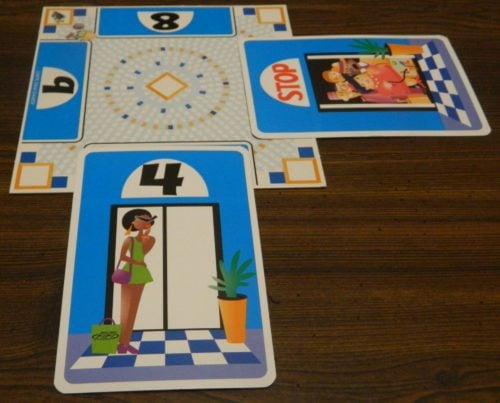 One of the players has played a stop card on top of one of the elevators. The only cards that can be played on top of this stop card is a go card or another stop card. 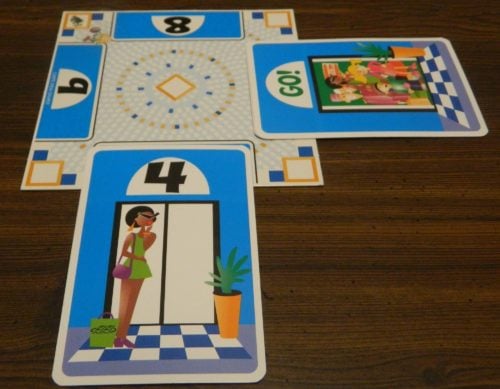 When a player can’t play their current card on any of the piles they must wait until one of the piles change to a number which allows them to play it. If all of the players are unable to play their card, the next foundation card is flipped over and play continues with this new card.

The add-up elevators variant is played the same as the normal game with the following changes: 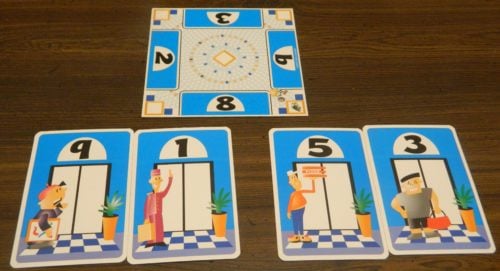 In order to play cards on the nine space players either have to add or subtract two cards. They could play the nine and one since nine minus one is eight. They could also play a five and three since five plus three equals eight.

The solo game is played the same as the normal game except the player is trying to get through all of the cards going through as few foundation gameboards as possible. Players can judge their performance as follows: 1-2 boards=”You’re an Elevator Expert!”, 3 boards=”Wow! Feel the Elevator Excitement!”, 4+ boards=”You get an E for Effort!”.

My Thoughts on Elevator Eddie

I began this review talking about four other speed games that I have looked at in the past. I bring this up because at the end of the day Elevator Eddie shares a lot in common with the other games that I mentioned. Like these other games Elevator Eddie is a pretty basic speed game where players race to play their cards before the other players are able to. To play a card they have to either be one higher or lower than the top card on a pile. While the mechanic is slightly different than the other games that I mentioned, for the most part all of these games play similarly to one another.

In some ways this is not that bad as I have always been a fan of these type of games. It is fun racing against the other players to get rid of your cards before them. While these type of games are not for everyone, people who like speed games should enjoy Elevator Eddie. The game is also really simple as you should have no trouble playing the game as long as you can add and subtract basic numbers. I could actually see Elevator Eddie working well as a teaching tool to teach younger players basic numbers, addition and subtraction.

The problem is that with these games being so similar, Elevator Eddie needed to come up with something that would distinguish it from the other games. Unfortunately the unique things that it brings to the table for the most part just make the game worse. I will get to the variant rules later but the biggest problem that I had with the game is the fact that you only have access to one card at a time. I am guessing this was done in order to make the game easier for younger children. While most of these type of games limit the number of cards that you can see at a time, they usually let you see at least a couple at a time. The problem with having access to only one card is that your fate is dependent on the order of the cards in your pile. It doesn’t matter how fast you are if the right cards don’t come up in your pile. Instead of the fastest player always winning the game, in Elevator Eddie luck seems to play just as big of a role.

In addition to reducing some of the luck, I also like having access to more cards at a time as it adds a little strategy to the game. In Dutch Blitz and Perpetual Commotion in particular you are able to place quite a few cards in front of you. This allows you to set up runs where you can play a lot of cards at the same time. This allows players to implement a strategy as they try to arrange their cards in a way that will make it easier for them to get rid of a lot of cards at the same time.

Since you only have access to one card at a time, Elevator Eddie ends up feeling like a very basic speed card game. There is no strategy in the game as outside of luck, speed is the only other factor that determines who ultimately wins the game. Elevator Eddie ends up feeling like the beginner’s version of this type of game which means that it might only really appeal to younger children. Older children and adults would probably be more interested in one of the more complex speed games.

The one unique thing that I liked about Elevator Eddie is how the foundation boards can change up the game pretty quickly. As the cards are randomly added to the table when no one can play, things can change quickly. Players need to adjust to the new card quickly in order to get rid of their card before one of the other players. This doesn’t drastically change the gameplay but it is nice change of pace from time to time. I think it handles the stalemate problem better than a lot of these type of games.

The final unique thing that Elevator Eddie has to offer is the add-up elevators variant rule. I was initially intrigued by the variant rule as I thought it was going to add more challenge to the game. While it does indeed add more challenge to the game, I don’t think it makes the game better. I can see the variant working well if you are looking for a tool to teach children basic math but otherwise I would probably avoid it. The problem is that it just adds chaos to the game as players have to remember to add/subtract cards and the current floor drastically changes anytime a new set of cards is played. The game also forces players to play in teams so there are only two teams playing at a time. At least based on my experience this regularly leads to one team sitting around waiting while the other team keeps playing cards. I personally didn’t really care for the variant rule and would never play it again.

For the components there are some things that I liked and other things that I think could have been better. While the theme is kind of weird, I give the game some props for actually trying to add a theme to this type of speed game. Most of these type of games don’t even bother trying to add a theme and the elevator theme actually works pretty well with the gameplay. I also like that the cards and foundation boards are thicker than I expected. Overall I thought the artwork was solid but unspectacular. The component quality is solid but you can tell that the game was made by a small publisher as it doesn’t have the quality you would expect from a larger publisher.

Should You Buy Elevator Eddie?

At the end of the day Elevator Eddie suffers from mediocrity. You can have fun with the game as the mechanics are simple and enjoyable if you like speed games. The game could even do a good job teaching younger children basic math skills. The problem is that Elevator Eddie fails to really do anything original which is a shame with how many other games basically do the same thing. Elevator Eddie basically simplifies the game which might make it more appealing for younger children but leaves something lacking compared to other games from the genre. The game has next to no strategy as you can only see one of your cards at a time which means your fate in the game comes down to how quick you are and far too often on whether the right card comes up at the right time. The variant rules don’t make things better as I actually think they are worse than the normal game.

If you would like to purchase Elevator Eddie you can find it online: Amazon