The object of Dutch Blitz is to be the first player to reach 75 points. Each player takes a deck of 40 cards and shuffles it. After shuffling each player takes the top three cards and places them in front of them to form the Post Piles. The next ten cards are then placed face up to form the blitz pile. The rest of the cards are kept in the player’s hand.

During each round all of the players play at the same time. A round ends when one player is able to play all of the cards from their blitz pile. Players can play cards in two different places. 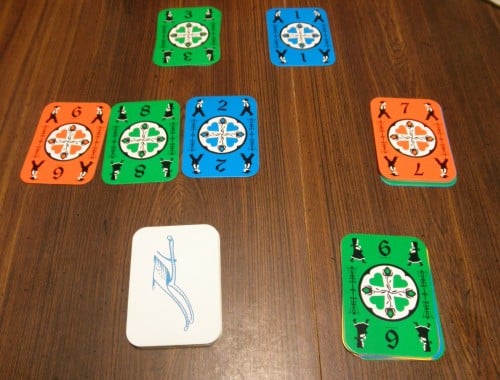 In the picture above the bottom left pile is the player’s hand, the bottom right is the wood pile, the three piles in the middle left are the post piles, the pile in the middle right is the blitz pile, and the piles at the top are the Dutch piles. In the scenario the player can play the blue two from their post pile on top of the blue one in the Dutch piles. Since there are now only two post piles the player can play the red seven card from the blitz pile into the empty post pile spot or they can play it on the eight green spot since the colors alternate as well as Dutch boy and Dutch girl. The player can then play the green six from the wood pile onto the red seven since the colors are different and the red seven has a Dutch boy and the green six has a Dutch girl.

Players continue playing cards from their wood pile, post piles, and blitz pile until one player has played every card from their blitz pile to the dutch piles or their own post piles. All of the other players must stop immediately. Each player counts up how many cards they have remaining in their blitz pile and they receive -2 points for each card. All of the cards played to the Dutch piles (piles in the middle of the table) are then sorted by each player’s deck and counted. Each player receives one point for each card that they were able to play to a Dutch pile.

After all points have been scored, players retrieve all 40 cards of their deck, the decks are shuffled, and a new round is begun. Whenever a player reaches 75 points, they win the game. If two or more players reach 75 points after the same round, whoever ends up with the most points is the winner.

The game Dutch Blitz has an interesting history. According to the Game’s Official Website Dutch Blitz was first developed by a man named Werner Ernst George Muller. Werner Ernst George Muller was a German immigrant who created the game to help his children learn colors and numbers. Over time the game became popular among Pennsylvania Amish and Dutch before continuing to spread through Christian groups.

Despite being a pretty simple game, Dutch Blitz is actually a very good game. The game is fun to play and is easy to pick up. The easiest way to describe Dutch Blitz is to compare it to the game Solitaire. Dutch Blitz is essentially Solitaire if you made the game multiplayer and sped it up quite a bit. Like Solotaire you try to play cards by building piles from low to high (the Dutch piles) while storing cards in piles that you currently can’t use in piles that go from high to low (post piles).

In a simple card game like this, usually there is only one way to win and that usually requires quite a bit of luck. Dutch Blitz eliminates some of the luck by allowing you to still do pretty well even if luck was not on your side. You most likely won’t win a hand in which you had bad luck but you can at least mitigate quite a bit of damage. Luck is still present in the game though, which is one of the game’s weaknesses.

In addition to reducing the affect of luck, the scoring system actually allows you to win in multiple ways. It is refreshing that the first person to play all of their cards from their blitz pile is not always the winner of the hand. Due to getting points for each card played in a Dutch pile you can actually get more points than the player who cleared their blitz pile if you end up playing a lot of the cards in the Dutch piles. In fact in the game that I played this actually occurred in several rounds. The scoring system forces players to focus both on eliminating cards from their blitz pile as well as trying to play as many cards to the Dutch piles as possible. If you only focus on playing the cards from your blitz pile, you will end up playing less cards and will thus not receive as many points. If you only focus on playing cards though, you will receive a stiff penalty from all of the cards left in your blitz pile.

While Dutch Blitz is a good game, there are many games that are very similar to it. The games Nertz, Ligretto, and Solitaire Frenzy are just three games of many that have only slightly different rules. Ligretto actually sound like the exact same game without the Dutch Boy/Girl rule. I am not sure which game was created first so I can’t say who copied who. If you already own one of these similar game though, it really doesn’t make sense to pick up Dutch Blitz.

Another issue I had was with the Dutch boy/girl rules. In the frenzy of the game it is sometimes hard to tell the difference between the two and you almost end up playing a wrong card in one of your post piles. After playing the game I realized that the blue and red cards of each deck feature Dutch boys and the green and yellow cards feature Dutch girls. The Dutch boys and girls should still have been larger on the cards though in order to make them easier to see during the game. In addition to sometimes being hard to see if a card is a Dutch boy or girl card, I question their importance to the game. I think they add unnecessary difficulty to the game. If they were eliminated though I think it would be too easy to build up the post piles. So at this time I don’t know if the Dutch boys and girls are a good or bad addition to the game.

The final complaint I have with the game is the cards themselves. I think the artwork is pretty nice except for the Dutch girl/boy being too small. My problem is with the card stock. The cards are pretty thin. In a game like this, that could be a problem since when multiple people are trying to play their card on the same pile I can see cards getting bent pretty easily. I wish the game would have come with thicker/stiffer cards which would have prevented the cards from creasing. Newer versions of the game may have fixed this problem.

I was actually quite surprised by Dutch Blitz. The game is quick to pick up and play and it is quite fun. I plan on keeping my copy of the game. If you are not a fan of card games or like to play slower paced/less competitive games, Dutch Blitz may not be for you. If you do like quick and competitive card games though you will probably like Dutch Blitz. If you don’t already have one of the other similar games I would recommend picking up Dutch Blitz.

Length of Game: 5-10 Minutes Per Hand

We love this game! We like to play with a bigger group of people. We play with a partner. One partner runs the Blitz pile (the stack of 10 cards and the 3 laying face up) and the other partner plays the hand cards where you flip through by 3's. This makes the game move faster. Usually we don't add cards to the post stacks. We decide this before starting the game. We refer to that part of the game as the "marrying" part. I think it was more rules to learn for beginners so it was just left off.

[…] reason I really like the quick paced free for all card game genre as evidenced by my reviews of Dutch Blitz and Blink. It is hard to explain why I enjoy these quick action card games but I just find these […]