Released back in 1960 the card game Dutch Blitz became a pretty popular speed card game. About two and a half years ago we reviewed Dutch Blitz and enjoyed it quite a bit. Today we are looking at Perpetual Commotion with happens to share a lot in common with Dutch Blitz. For people not familiar with either game, they are basically what you would get if you took Solitaire and added both a competitive and speed component to the game. While Perpetual Commotion only slightly differs from Dutch Blitz, it is still a quick chaotically fun experience.

How to Play Perpetual Commotion

Each player takes a deck of cards and shuffles it. All of the players will then pass their deck of cards to the left at the same time. Once the cards have been passed the round begins. Before playing the game each player places the top five cards from their deck in front of themselves face up forming what is called the “Front Five”. Next each player will form a face down pile of thirteen cards which is called the Feeders pile. The rest of the cards form the player’s Playmakers pile.

This player has completed setup by placing five cards face up in front of themselves (Front Five), thirteen cards face down to the right (Feeders pile), and the rest of the cards to the left (Playmakers pile). 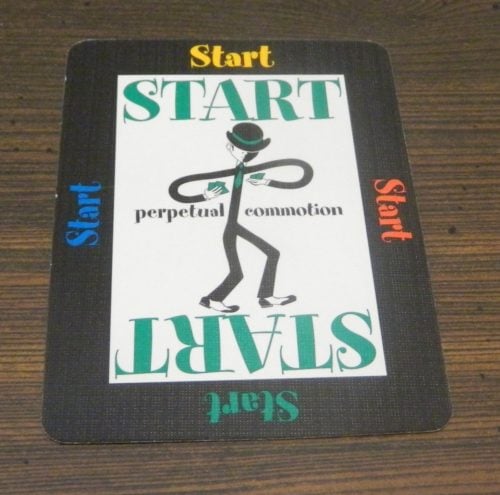 A start card has been played which has started a new pile in the center of the table.

After a start card has been played anyone can play a two card of any color on top of it. 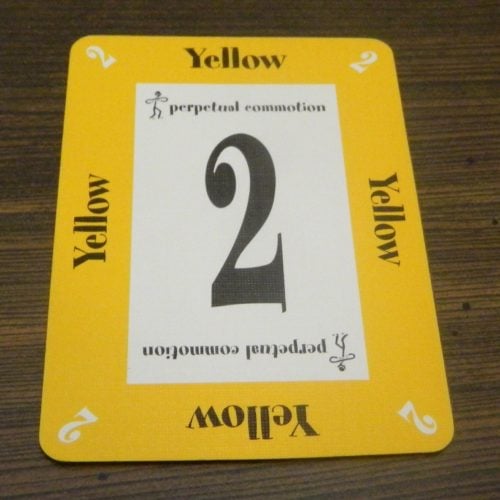 One of the players played a yellow two on top of a start card. 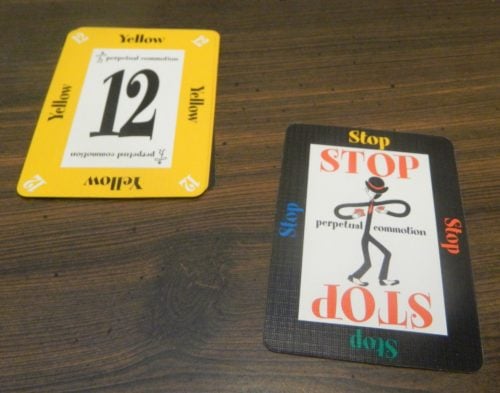 This player is about to play a stop card finishing off this pile. 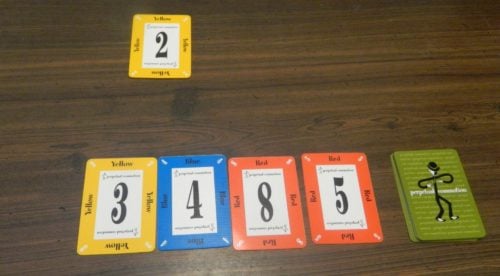 There are only four cards in this player’s front five. They will draw the top card from their feeders pile to fill in the empty spot in their front five. 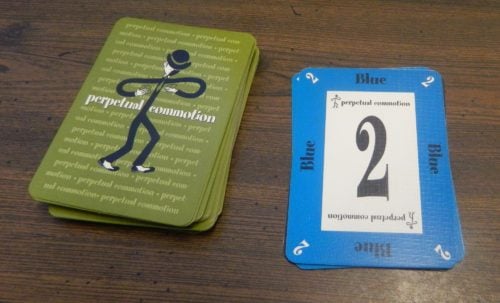 This player is currently looking through the Playmaker deck. They can either play the blue two or draw the next three cards.

Players continue playing the game until one of the players has gotten rid of all of their cards from their Feeders pile. This player can then call “Out” and all of the players have to stop immediately. The player doesn’t have to call out immediately though if they want to play some more cards to score more points.

This player has played all of the cards from the Feeders pile so they can call out at any time.

When a round has finished scoring is conducted. 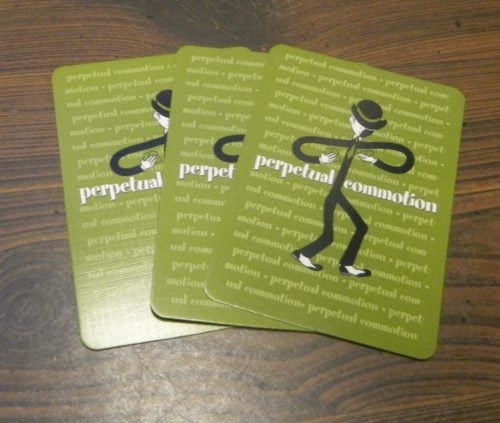 This player has three cards left in their Feeders pile so they will score -6 points.

Except for the first round there is a chance for bonus scoring. Before a round begins the die is rolled by the player who called Out first in the previous round. Depending on what is rolled, additional bonus points might be available in the round.

Each player records their score and shuffles a deck of cards for the next round.

When a player reaches 150 points, they win the game.

My Thoughts on Perpetual Commotion

People familiar with Dutch Blitz are probably already thinking that Perpetual Commotion sounds a lot like it. I totally agree with that assessment since Perpetual Commotion basically feels like a variant of Dutch Blitz which has slightly tweaked some of the rules. Basically all of the main mechanics are exactly the same in both games. The following small tweaks are the only differences I could find between the two games:

For those of you not familiar with Dutch Blitz I would basically call Perpetual Commotion a competitive speed Solitaire. Basically you play cards to piles in the center of the table that match the color and are one higher than the top card in the pile. Unlike Solitaire though you cannot take your time trying to figure out what you want to do. When you see an opportunity to play a card you need to immediately play it or another player is likely going to beat you to it. If you don’t have a quick reaction time you are going to have a hard time winning Perpetual Commotion.

Just like with Dutch Blitz, Perpetual Commotion is really simple. Basically all you have to do is play sequential cards of the same color on the piles in the center of the table. Anyone who has ever played Solitaire in their life should have no problem playing the game. I would say that most hands in Perpetual Commotion are really quick lasting a couple minutes to five minutes at top. The length of the whole game can be adjusted quite easily by adjusting the number of points a player needs to win the game. It usually takes around 30-45 minutes to finish a 150 point game of Perpetual Commotion.

So the goal in Perpetual Commotion is to play as many cards as possible to the piles in the center of the table. Every card that you play will score you a point and may prevent one of the other players from playing one of their cards. In order to maximize the number of cards that you are able to play, you basically need to keep one eye on your cards while you keep the other eye on the piles in the middle of the table. You need to know when other players add cards to the piles so you can possibly add the next card to the pile before another player can.

The biggest complaint I have for Perpetual Commotion is that there is quite a bit of luck involved in the game. The fastest players in the game are going to have an advantage but the cards a player gets in their feeder pile are really important. If you get a lot of low cards in your Feeder pile you have a pretty big advantage over the other players. If you have a lot of higher cards it will be considerably harder to win. The reason you want lower cards is that they are easier to play since all of the piles start low and get higher. Therefore there are more opportunities to play low cards than there are high cards. Players that are considerably better at the game will be able to overcome some of this luck but if all of the players are equally skilled the luckiest player will likely win. With rounds being so quick though, the reliance is not as bad as it could have been.

Other than the reliance on luck the other issue I have with Perpetual Commotion is with the mechanic where the bonus scoring can change every round due to a roll of the die. While this is more of an annoyance than anything else, I just don’t really see the point of the die. In one game that I played, every die roll was odd so the die never even impacted the game. Usually the die just makes finishing first even more powerful. Five points for finishing first is already enough so I don’t like giving the finishing player ten or twenty points. I also don’t like how the player who finished first in the previous round can lose points just because they rolled the wrong number. While the die doesn’t really impact the game that much, I plan on just ignoring the die the next time I play the game.

One thing I am a little curious about is how Perpetual Commotion plays with five or six players. With four players the game is pretty chaotic but manageable. I would think with six players the game would be considerably more chaotic. I don’t know if this would improve the game or not. I could see more players making the game even more enjoyable as you race to play one of your cards before another player is able to. If the game becomes too chaotic though players will just get in each others’ way and it will be hard to keep track of what is going on in the game. Someday I would like to try out how higher player counts work in the game.

Component wise there is nothing particularly great or bad about the game. It is your basic card game after all. I like that the game includes six decks of cards which allow six players to play the game. I like that the numbers on the cards are quite large which makes the numbers really easy to read. The game could handle the sixes and nines better though. The game only underlines the sixes which makes it surprisingly easy to think the nines are sixes. Otherwise the cards’ artwork is quite bland but that doesn’t really matter since you will be too focused on playing cards to worry about the card artwork.

Should You Buy Perpetual Commotion?

Perpetual Commotion is a fun speed card game. While it basically plays like a competitive speed Solitaire adding these mechanics really add to the game. If you like simple speed games I think you will really enjoy Perpetual Commotion. The game does have a pretty high reliance on luck though. The fastest players have an advantage but a player who gets a good set of Feeder cards has a big advantage in the game.

If you would like to purchase Perpetual Commotion you can find it online: Amazon

It's actually super chaotic with more than four people. I've only ever played with more than six people, and we will pause in the middle to fix the piles that start to slide all over the place, and also to breathe because you basically don't breathe during the game.

My friends and I call it the chaos card game, because that's what it is!

We also use our own decks of cards with unique backs, so we can sort through them at the end and return each deck to the original owner. It also allows more than six people to play.

I only played the game with four players, but I could definitely see the game becoming considerably more chaotic with six or more players.